Home / WORLD / Who will Trump pardon? As pundits and activists continue to make the case for Assange, Joe Exotic’s reportedly on the list

Who will Trump pardon? As pundits and activists continue to make the case for Assange, Joe Exotic’s reportedly on the list 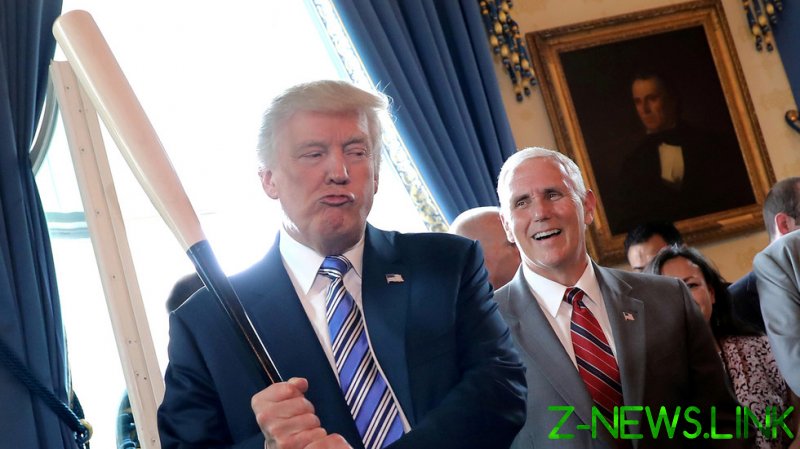 Last-minute pardons have become a tradition for outgoing presidents. In theory, the power is supposed to be used to overturn wrongful convictions or excessively harsh sentences, but past administrations, both Democratic and Republican, have granted mercy to friends and political allies.

Trump is expected to honor this somewhat seedy custom. He has already used this privilege to pardon his former campaign chairman, Paul Manafort, as well as Charles Kushner, the father of his son-in-law, Jared. While some of the names announced tomorrow will likely be the beneficiaries of nepotism, many are still hoping the president will show mercy for more ‘deserving’ individuals, such as WikiLeaks co-founder Julian Assange. However, if the reports are accurate, it appears that the meth-head from ‘Tiger King’ is a higher priority for Trump. Pundits and activists have their own wishlist, but who will make the cut?

Judging by social media chatter, Assange would be a top pardon pick if the matter was put to a vote. The WikiLeaks co-founder, whose fate is still uncertain after a London court blocked his extradition to the US, has received support from a broad range of pundits, politicians and activists. Assange could spend the rest of his life in prison, after being charged in the US with espionage for publishing classified documents, some of which exposed US war crimes in Iraq and Afghanistan.

Despite the public enthusiasm for an Assange pardon, reports suggest it’s unlikely, although not impossible, that the Australian will get the nod from Trump.

In a tweet, NSA whistleblower Edward Snowden argued that Trump’s apparent unwillingness to act on behalf of Assange illustrates the nefarious power held by entrenched interests in Washington.

Snowden himself is a candidate for pardon, although his case has received less attention. Unlike Assange, who has been languishing in a London prison since his arrest in May 2019, the ex-National Security Agency (NSA) contractor is a free man living with his wife and newborn child in Russia. However, it’s believed that any attempt to return to the States would result in his immediate arrest. Snowden fled the United States in 2013, after he leaked thousands of documents that detailed how the NSA carried out a vast, warrantless surveillance program that included American citizens.

It would be wrong to completely discount the possibility of the whistleblower making the list. Snowden has support from members of Congress, including Senator Rand Paul (R-Ky) and Rep. Matt Gaetz (R-Fl). In August, Trump said he was willing to entertain the argument from others that Snowden had not been treated fairly by the US justice system.

It’s probably a long shot, though. Former Attorney General William Barr has expressed vehement opposition to a Snowden pardon – a position he also holds with regard to Assange.

It would be surprising if Trump didn’t grant some favors to his political comrades, past and present. Rumors have been circulating for weeks that the outgoing president will pardon his former adviser Steve Bannon. The co-founder of Breitbart News has been a firebrand of the MAGA movement, but found himself in legal trouble after he was charged last year with lying to donors about a plot to crowdfund the construction of a wall along the US-Mexico border.

But even Bannon could be excluded from the act of mass mercy, according to the most recent leaks from the White House.

Assange may get the cold shoulder, but at least a meth-smoking TV star sentenced to 22 years in prison for a murder-for-hire plot, and for violating wildlife laws, has a decent chance of walking free. A lawyer for Joseph Maldonado-Passage, better known as ‘Joe Exotic’, has told the media he’s “absolutely confident” his client will receive a pardon from Trump. In a revealing indictment of our time, many on social media have demanded the release of the ‘Tiger King’ star, apparently so they can watch more of his soul-crushing antics.

Mr. Exotic is apparently so confident he will secure a presidential pardon from Trump that his team claims to have parked a limousine near his prison in preparation for his early release.

Joe isn’t the only ‘celebrity’ potentially slated to receive mercy. According to media reports citing sources familiar with the matter, Trump will use his powers to keep rapper Lil Wayne out of prison. The musical artist pleaded guilty last month to a Miami gun charge and could face a decade behind bars if Trump doesn’t intervene.

The rapper was photographed with the president last year and was a vocal supporter of Trump’s initiative to carry out criminal justice reform.

Last but not least, rumors have been circulating that Trump may try to pardon himself, although there’s no precedent for such action and it’s unclear if it’s even constitutional. There is also the small matter of why Trump would need to take such extreme measures: Media outlets claim the outgoing president may be afraid of potential legal trouble that could result from him allegedly ‘inciting’ protesters who stormed the Capitol on January 6. These reports appear to be highly speculative, however, and it’s unlikely he would take such pre-emptive action, either for himself or his immediate family. The Department of Justice’s (DOJ) Office of Legal Counsel concluded in 1974 that a sitting president cannot pardon himself, but courts have yet to issue a ruling on the matter. Some believe that any attempt at ‘self-pardon’ could actually increase the likelihood of the DOJ indicting Trump.