Home / WORLD / ‘Who thought this was a good idea?’: Jill Biden gives speech in front of giant ‘NAZI-INSPIRED’ flag

‘Who thought this was a good idea?’: Jill Biden gives speech in front of giant ‘NAZI-INSPIRED’ flag 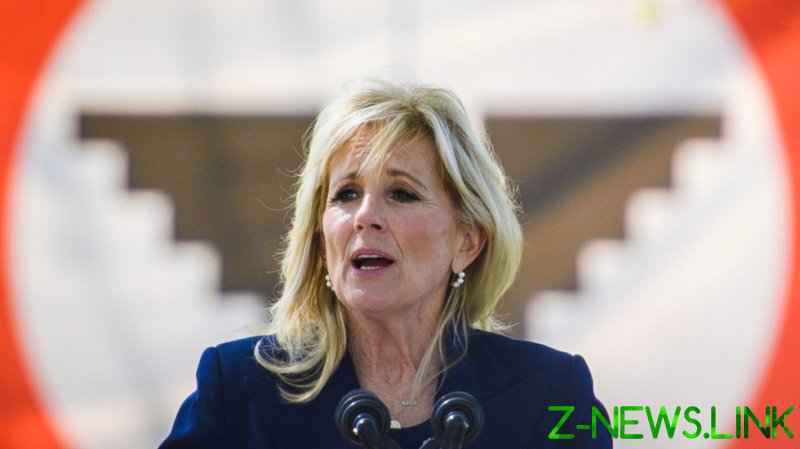 Jill Biden was in Delano, California, on Wednesday, giving a speech to farm workers, urging them to get vaccinated and promising immigration reform. She praised the late union leader Cesar Chavez, whom President Joe Biden honored by declaring March 31 ‘Cesar Chavez Day,’ an annual tradition started by Barack Obama in 2014.

Behind her, however, was a flag that set some alarm bells ringing online. The giant banner featured a black eagle on a red and white background, a combination of color and imagery typically associated with Nazi Germany.

Some commenters wondered how the First Lady could get away with such a stunt, while the media hyperventilated over the stage plan at this year’s Conservative Political Action Conference resembling a Norse rune that appeared on some Nazi uniforms.

The flag, it turns out, is not a design rejected by Adolf Hitler, but the old logo of Cesar Chavez’ National Farmworkers Union, now called United Farm Workers (UFW). According to multiple accounts, Chavez chose an Aztec eagle as a nod to his Mexican heritage, and the colors white and red to represent hope and sacrifice respectively. However, Chavez studied logos and emblems – including the Nazi swastika flag – and concluded that Hitler had found a “potent color combination” to spread his message, according to the Smithsonian Institution.

The eagle is still used to this day by the UFW.

“Nazi-inspired” is therefore a pretty accurate description of the flag, though Jill Biden was hardly channeling the Fuhrer with her promises of liberalized immigration policy.

Yet she wasn’t completely channeling Chavez either. While her speech, and a video message posted by President Biden the same day, focused extensively on a “path to citizenship for undocumented farmworkers,” Chavez himself may have disagreed with this stance.

Chavez was a staunch opponent of illegal immigration, viewing these “undocumented” migrants as a source of cheap, anti-union labor. He accused the Nixon administration of deliberately letting in “wetbacks” to undercut American union labor, encouraged union members to monitor the Mexican border themselves for illegal crossings, and to turn in their illegal co-workers to immigration authorities.

However, he later supported amnesty programs, and the UFW today firmly supports Biden’s proposed immigration reforms, which include a path to citizenship for up to 11 million illegal immigrants already residing in the US.