Home / Society / Who: the Incidence of coronavirus can “jump” at any moment 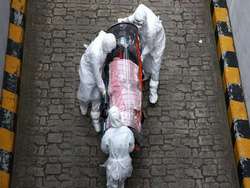 The world health organization (who) suggests that the incidence of coronavirus can “jump” at any moment and in this wave it may happen the second peak of the disease. This was at the briefing said the Director of the who programme on emergency health Michael Ryan. It has been broadcast on the YouTube channel of the organization.

The journalists clarified, if possible scenario in which there are “second wave” of the pandemic coronavirus.

“I think it depends on what part of the world you are. Now we are in the second wave. We are exactly in the first wave around the world, if you look at the data from South America, Africa, Asia, and other countries. We are still in the stage when the disease is rising,” said Ryan.

He explained that under the “second wave” in the classic sense specialists have in mind a situation in which the number of cases in the first wave will be reduced to a relatively low level, and after a few months the disease will manifest itself again.

Ryan added that such a scenario could become real for many countries in a few months. While Ryan believes that the incidence of coronavirus can “jump” at any moment.

“We can’t make assumptions. We’ll have a few months to prepare for a second wave. We may have a second peak in this wave,” said Ryan, adding that this has already happened during previous pandemics such as the Spanish flu pandemic. “It was the second peak, not necessarily the second wave”, — said the employee who.

Ryan noticed that it is necessary to continue testing for coronavirus and other measures to support health. He also said that to determine the onset of the second wave will need later, noting that it may coincide with seasonal flu.

Suspended testing of the drug against malaria COVID

During the briefing, the head of the organization Tedros Adan Ghebreyesus said that the who has suspended trials of hydroxychloroquine and chloroquine as medicine from COVID-19.

Of ghebreyesus told that on may 22 in the Lancet a study was published on hydroxychloroquine and chloroquine, which dealt with the effect of drugs on patients with coronavirus. The authors noted that among patients taking these drugs, or a mixture of them, was a higher mortality rate.

The Executive group decided to check all available data about drugs, “to adequately assess the potential benefits and harms from this drug”, said the head of the who.

“I would like to repeat that these drugs are generally considered to be safe for use in patients with autoimmune diseases or malaria,” said Ghebreyesus.

The number of cases of coronavirus in the world is approaching 5.5 million Died from COVID-19 344 503 people.