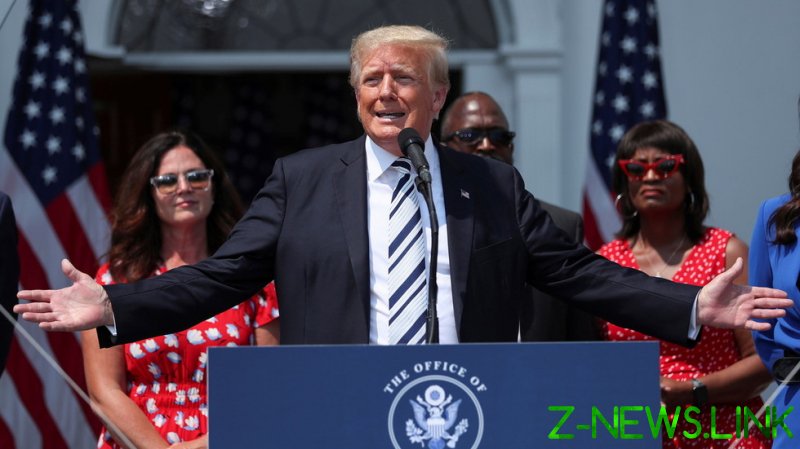 In a Sunday interview with Fox News’ Maria Bartiromo, Trump described Babbitt as an “innocent, wonderful, incredible woman” and once again demanded that the identity of the shooter be released.

“People want to know [who shot Ashli Babbitt] and why,” the former president claimed.

Babbitt, an Air Force veteran, was shot and killed after rioters breached the US Capitol on January 6, and lawmakers and security either locked themselves in place or evaded the area. The identity of Babbitt’s shooter has not been released, but it had been believed to be a Capitol police officer who fired the shot, allegedly to prevent Babbitt and others from breaking through a door. Trump, however, has suggested that it was the “head of security” for a top Democrat who was behind Babbitt’s death.

“I’ve heard also that it was the head of security for a certain high official, a Democrat,” Trump said.

The shooter, the former president added, is being “protected,” but the truth “will come out.”

Ashli Babbitt’s death has become increasingly controversial, with mostly conservative critics claiming the shooting was unjustified and demanding the release of the shooter’s name and further investigation. Fox News’ Tucker Carlson has been among the most vocal pundits questioning Babbitt’s death.

Liberal pundits have not been so suspicious of the death, and many blasted the president’s latest suggestions, claiming it could “inflame” some on the right.

Since leaving office, Trump has continued to hold rallies and release public statements on current events. He also recently joined a class action lawsuit against Facebook, Google, and Twitter, seeking to take away those platforms’ ability to discriminate against people based on political opinions. Trump’s political future, however, has been open to speculation, with the president hinting multiple times that a 2024 presidential run could happen.

Asked if he will be running by Bartiromo, Trump said he “knows” whether he is running or not and people are “going to be very happy” with his decision.

“I absolutely know my answer, and we’re going to do very well and people are going to be very happy,” he said.