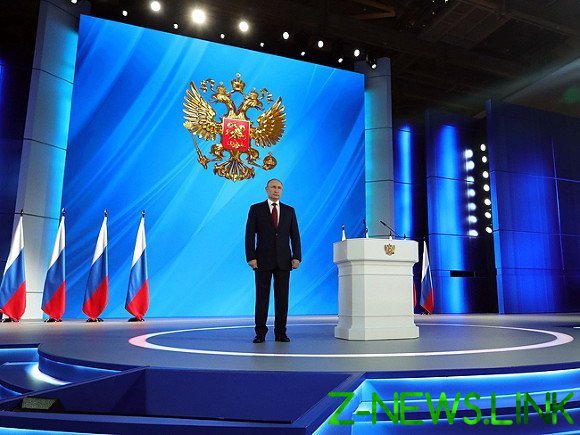 The Russian authorities are defending their own interests instead of promoting the universal principles.

Vladimir Putin at every opportunity, stressed that Russia consistently defends its national interests. So in the course of this address to the Federal Assembly, he said: “Russia can be and remain Russia only as a sovereign state. Sovereignty must be unconditional”.

Let’s look at this ideology in the coordinates of geopolitical positioning. Or simpler: who now offers to the world.

The United States, for instance, freedom and democracy. America would privatize these principles, and now in the consciousness of the world community, they relate with it. Of course, often under the guise of freedom and democracy, the United States promote their national interests. But technically they are defending the universal ideology that looks extremely attractive in the eyes of hundreds of millions of people.

Europe, in turn, stands for humanism — the same freedom and democracy, plus social security of citizens and tolerance in religious and ethnic relations. Of course, in European politics there are double standards and ideological narcissism, expressed in the desire to teach others how to live. But outwardly proclaims the universal principles, backed up, as in the case of the United States, high standard of living and attractive for many people.

Even the Islamic radicals who want to exercise now the own civilizational project, proclaim the divine laws that seem fair to many Muslims.

And Russia, then, defends its sovereignty. This is not a universal (uniting), and purely national (insulating) ideology. In fact, in its subtext can be read: let’s all blown to hell, if only we were good. This ideology is not attracted to Russia and other Nations, and only encourages them to look at her warily. No wonder that our country is now in geopolitical isolation.

The situation is similar in China — it is also no universal ideas that are attractive to other countries. However, China, with 1 billion 400 million citizens and a strong economy, can afford it. But whether it can afford Russia with a decreasing population and economy, have long been able to break the stalemate — the big question.

In fact, we have nothing to offer the world.

The current Russian government does not understand that we must defend not the interests and principles. To promote a should not what is good only for us, but first of all something that can be attractive for all.

However, to uphold the principles that they need to have. Moreover, they should not just resoundingly declare, but also to follow — especially at home.

How is it in Russia? Do we have any idea of the existence of a state ideology, attractive philosophical doctrine that unites Russians?

Then of course, I can say that that’s enough of ideologies — you can safely live without them. However, without a doctrine of existence, creating a common state of being atomized state. From the public consciousness is gradually replaced by “we” and begins to dominate the “I”. And in a multinational state like the Russian Federation, can be conceived of the idea of ethnic sovereignty.

After the collapse of the USSR attempts to find an attractive “scrapie” were made more than once.

I remember 15 years ago the hearts of the citizens warmed to the idea that Russia will become a Great energy power. However, this idea quickly fizzled as it became clear that its content is primitive raw material economy, dooms the country to backwardness.

Then shone forth the idea is just a great power — a strong geopolitical player. Until the end of 2013 this seems to be confirmed by economic development and rising standards of living, victories in Georgian war in the Olympics, and — later — the annexation of Crimea.

Now, however, of great power, the Russian government is trying not to remember. Brilliant of our victories were never acknowledged — on the contrary, condemned them. And the economy sucked at the end of 2013 in recession (note, this is before any sanctions and falling oil prices), so still can not get out of it.

In General, the state doctrine of Russia does not have, and because we are in some intermediate state. We are not an Empire and not a nation-state. Not dictatorship, not democracy. And not liberalism, and statism. And not an economic disaster, not development. It seems to be not yet sink, but not float.

The only ideology which clings to the Russian power, is the ideology of self-preservation, submitted to the Russians as “the doctrine of stability”. Say, all of us more or less safely, leave it as is — it’s bad for everyone.

But in fact it is the doctrine of congestion, which in one form or another profess any authoritarian regime. It is manifested in the suppression of any opposition: the dispersal of protest rallies, clipping undesirable candidates from the election.

This is a known pattern: the power that can shape the future, always trying to prevent the onset of future. She absolyutiziruyut present and thereby plunges the country in the past — in degenerate, chthonic being.

I remember a year or two ago, in describing the then situation, I wrote that we are in a state of bad infinity. It is a term of Hegel: event seems to be happening a lot, but nothing changes.

So, Russia is still in a bad infinity. Apparently, this is the “national interest” of our government. Meanwhile, people’s life is more about survival. And the current government’s resignation is unlikely to affect the situation.