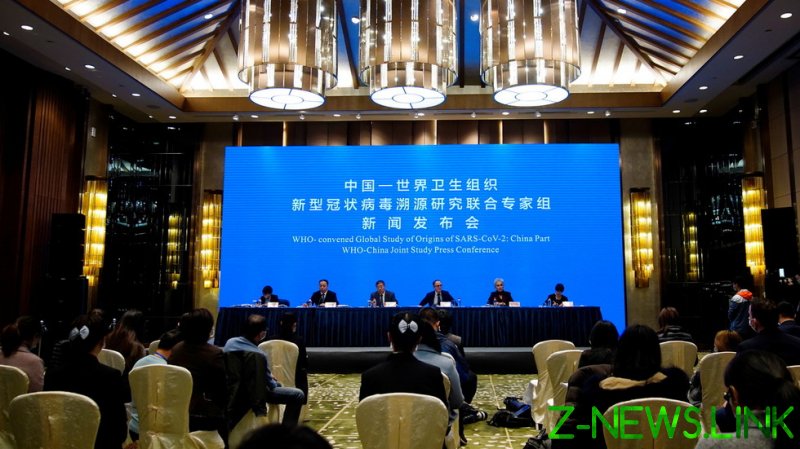 The expert team with the World Health Organization (WHO) held a press conference on Tuesday to present their findings to the public. The team spent four weeks in Wuhan, the city that was first to report the outbreak of the new disease in December 2019.

The team identified and looked into the four main hypothesis of how the coronavirus was introduced to the human population, WHO food safety and animal diseases expert Peter Ben Embarek said.

While the rumored incident at Wuhan’s secretive lab sprouted conspiracy theories shortly after the pandemic began, the latter hypothesis proved to be the least realistic.

“The findings suggest that a laboratory incident hypothesis is extremely unlikely to explain the introduction of the virus into the human population,” Ben Embarek stated.

The most realistic theories revolve around the virus jumping from animals to humans, directly or indirectly. While various coronaviruses have been circulating among various animals, such as bats and pangolins, neither of them resembles Covid-19 enough.

“The viruses identified so far from neither of these species are sufficiently similar to SARS-CoV-2 to serve as direct progenitor of the SARS-CoV-2,” Liang Wannian, an expert with China’s Health Commission, said.

The expert team also found no evidence that the virus was circulating in Wuhan, as well as the rest of the Hubei province, prior to its detection in December 2019. The team found “little evidence of substantial unexpected fluctuations in mortality that might suggest the occurrence of the transmission of the SARS-CoV-2,” Liang stated.

“There is not enough evidence to determine whether SARS-CoV-2 had spread in Wuhan before December 2019,” he said, adding that the virus might have been circulating before that elsewhere.

The ability of the virus to survive low temperatures for prolonged periods of time contributes to the theory that it might have been introduced to Wuhan through frozen food products. Still, it remains unclear whether the surviving virus remains contagious enough to trigger a large-scale outbreak, and further research is needed, Ben Embarek said.

“We know the virus can survive in conditions that are found in these cold, frozen environments, but we don’t really understand if the virus can transmit to humans,” he stated.