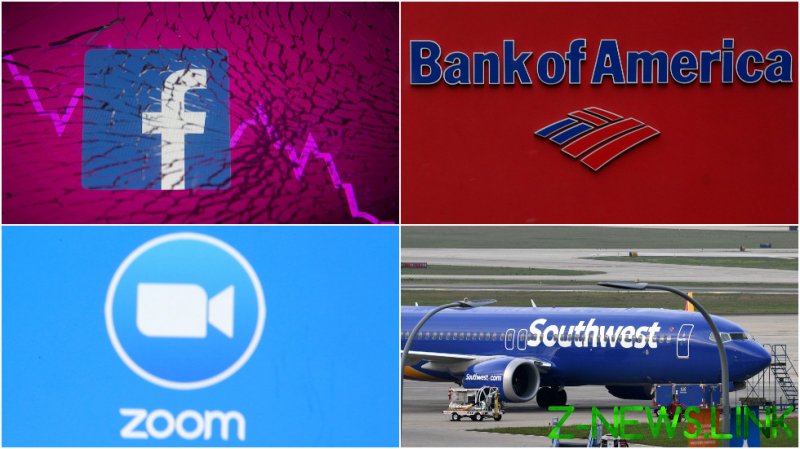 While the glitches affected a number of popular social media platforms – among them Twitter, Reddit, Facebook, Instagram and SnapChat – other more significant institutions also faced major tech issues on Monday, such as Bank of America, Southwest Airlines, the professional networking site LinkedIn and the cryptocurrency exchange Coinbase, all according to outage tracker DownDetector.

The tracking website noted that the problems at Facebook marked the “largest outage we’ve ever seen on DownDetector” with more than “10.6 million problem reports from all over the globe,” however the platform, along with the Facebook-owned site Instagram, appear to have come back to life since, having been down for some six hours.

Chat apps such as Zoom and Telegram, as well as Gmail – among the world’s most heavily trafficked email services – were also reportedly caught up in the internet-wide meltdown. All three have seen a major surge in use amid the Covid-19 pandemic, which has driven many firms to transition to more remote-work. Monday’s glitches were sure to cause headaches for countless professionals attempting to work from home, even prompting some to demand to know “who broke the internet.”

Other users offered some novel theories as to what might have caused the outages, ranging from a widespread cyber attack, a clandestine CIA operation, to the usual scapegoat – the “Russians.”

It remains unclear exactly what caused the widespread outages on Monday, though a Facebook employee who declined to be named told NBC the company faced a DNS [Domain Name System] problem, referring to a ‘phone book’-like system used to look up individual websites. The employee added that there is “no reason at this point to suspect anything malicious,” but the outage nonetheless affected “pretty much everything” at Facebook before the issue was resolved later on Monday evening. The six-hour outage reportedly cost the platform a cool $6 billion.