Home / Society / Who ate all the food in the Soviet Union? Brezhnev food program

Who ate all the food in the Soviet Union? Brezhnev food program 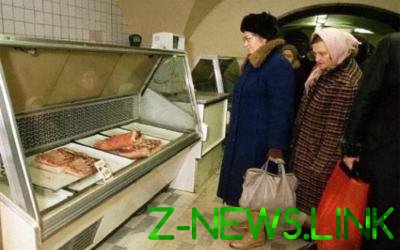 16 November 1981, the then Soviet leader Leonid Brezhnev for the first time raised the issue of the Food program. In fact, the authorities admitted that the situation with food in the realm of “developed socialism” in 35 years after a devastating war were far from ideal: half-empty shelves, a shortage of basic necessities, increasing grain imports and meat from countries of the “decaying capitalism.”

Food program of the USSR

Itself food programme was drafted for six months and adopted in 1982 at the may Plenum of the Central Committee of the CPSU. She assumed the transition to more intensive methods of farming (mechanization, chemicalization, the growth of wages in collective farms, etc.) without ploughing up new large areas (as in the development of Virgin lands in 1950-ies), as well as improving the storage industry, refining and delivery has already obtained the products (due to technological backwardness and lack of banal same storages and silos, the Soviet Union was annually losing a huge share of the harvest). 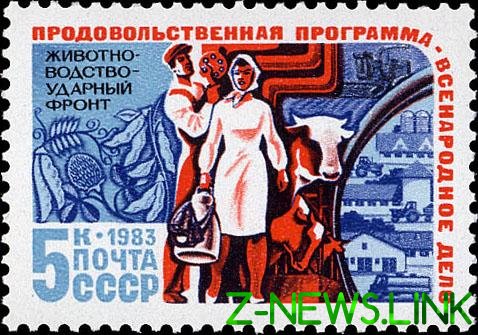 Soviet agitation and propaganda about the Food program of the USSR

In fact, the authorities admitted that the situation in the sphere of food from the 1960-ies have consistently deteriorated. Largely this was due to increasing urbanization (migration of peasants, who were largely subsistence farming to large cities, while remaining on the ground with the available technologically backward methods of farming to feed all could not), as well as the welfare of citizens who could now afford to buy not only the potatoes with pasta but also more expensive products.

Official Soviet statistics claimed that in 1990 was to achieve growth in the consumption of meat and meat products per capita from 58 kg to 70 kg, milk and dairy products — from 314 to 330 kg, eggs — from 239 to 265 pieces. The shelves of stores are more empty. Part of the tasks of the Food program the early 1980-ies, Russia has not achieved to this day: Russians on average consume per year 63 kg of meat, about 230 kg of milk and dairy products. However, vegetables, fruits and berries grew on the order, radically changing the very structure of power: this useful, vitaminosoderžaŝej and low-calorie food today we eat much more than in the USSR, where a terrible deficit was a green banana and the bony orange.

See also:  The elements of horror and Thriller in the Soviet kinofantastike

November 16, 1981, at the Plenum of the CPSU Central Committee General Secretary Leonid Brezhnev raised the issue of the food program. According to the head of the state, there is no business more important, more noble than the satisfaction of the vital needs of the people…

The author of the program called Mikhail Gorbachev, who was responsible in the Politburo agriculture. The programme stated the main problems of development of agriculture, and proposed a package of measures aimed at overcoming the crisis. Food production expected to increase by 1990, 2.3–2.5 times. The main attention was paid to the formation and development of agro-industrial complexes (APK) called for further mechanization, chemicalization, improved forage, the use of new intensive technologies… planned development and intensification of agriculture in the Nonchernozem zone of Russia, the Volga region and the Urals. In large measure the efficiency of agriculture were to improve agriculture. Food program focused on the overall improvement of working conditions and living conditions of farmers…

See also:  Rusty trains in the Crimea shocked the Ukrainians

Read more in the blog of the author 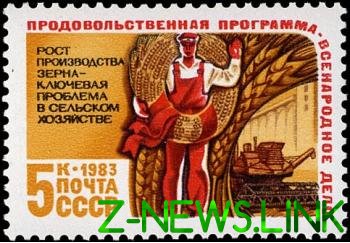 Soviet agitation and propaganda about the Food program of the USSR

The development of agriculture had a negative impact of permanent price subsidies by the state for products: for example, the price of meat in stores in the late 1970-ies were 2-3 times lower cost. The attempts of the state to raise prices created social tensions until the workers unrest (the most famous is the speech of workers in Novocherkassk in 1962 due to the cost of meat, which was suppressed troops).

In 1970-e years began to roll into the abyss the economy of the USSR for a while “poddomkratit” the price of exported oil and this allowed Brezhnev to remove the growing tension due to retaliatory import food and manufactured goods: if in the early 1970-ies, the USSR has imported 7 million tons of wheat a year, by 1982, imports of grain has reached 45 million tons. In 1981, the Soviet Union became the largest importer of meat and 1 million tonnes per year. But even Brezhnev knew that forever could not continue, as the price of oil is exposed to a strong stake**ments (shortly after his death, they really collapsed), and that the agricultural sector needs serious reform.

According to the adopted Food program by 1990 was supposed to increase food production is 2.3–2.5 times. But have adopted the program of Brezhnev died soon after, started “five years of lavish funeral” the other General secretaries and Restructuring, the growth and collapse of the Soviet system. To achieve something managed, something there, something even achieved (for example, built plants for production of dry milk) were in the new economic conditions, unclaimed, and also collapsed.