Home / WORLD / White supremacists left out in the cold in DC, literally

White supremacists left out in the cold in DC, literally 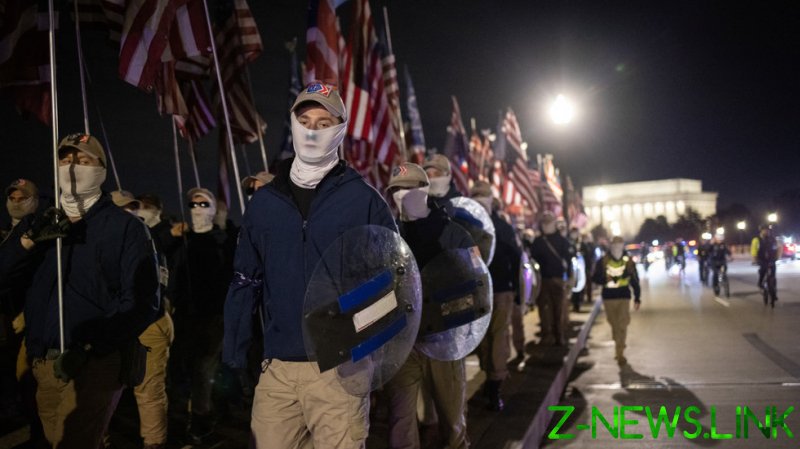 Donning uniform of white neck gaiters, sunglasses and khaki pants, and holding plastic shields, members of the ‘Patriot Front’ marched in the US capital on Saturday evening, under the motto “reclaim America.” The demonstrators were carrying American flags and banners, with drummers setting the rhythm to the procession. Some social media users have also claimed the group set off a smoke bomb at one point, with photos appearing to show the aftermath. A number of bystanders booed the activists, with police keeping a close eye on the march.

Thomas Rousseau, the Patriot Front’s leader, explained that the procession was meant to serve as an “exhibition of our unified capability to organize, to show our strength–not as brawlers or public nuisances, but as men capable of illustrating a message and seeking an America that more closely resembles the interests of its true people.”

The rally wrapped up without incident at the Arlington Memorial Bridge several hours later. This is when the real trouble began, as it became clear there was not enough room in a rented U-Haul van for all the members. As a result, part of the group ended up waiting under the open sky in 45-degree cold (7°C) as the vehicle toured back and forth for about three hours.

The Patriot Front branched out of Vanguard America in 2017 when a man allegedly affiliated with the group rammed his vehicle into a group of counter-protesters during the Unite the Right rally in Charlottesville, Virginia, killing a woman and injuring dozens more. The Anti-Defamation League and the Southern Poverty Law Center describe the Patriot Front as a racist, neo-fascist hate group, which, among other things, espouses the preservation of white Americans’ racial purity and the dismantling of the “dysfunctional American democratic system.” To date, the group’s main areas of activity have been the distribution of its messages, both online and in the street, as well as the holding of marches and the staging of flash mobs.