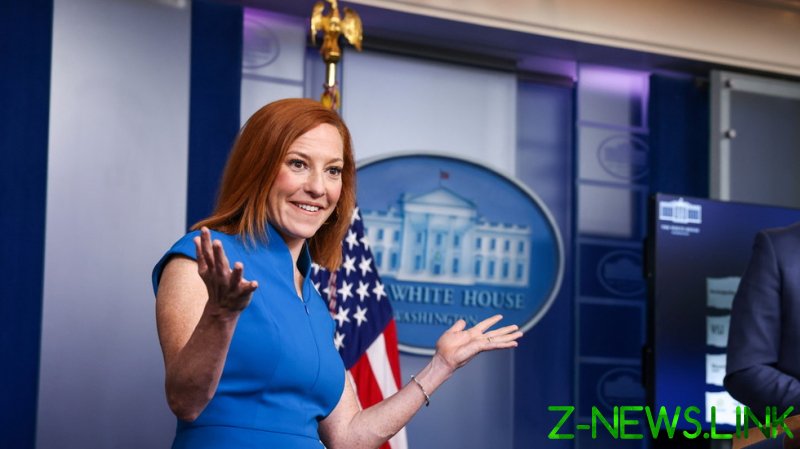 Scheduled for Friday afternoon, known in Washington as “take out the trash day,” the event started about 20 minutes late and ran for less than 40 minutes.

Though the White House YouTube channel boasts nearly two million subscribers and Biden famously officially won the most votes ever in US history, fewer than 15,000 people tuned into Psaki’s gimmick briefing.

It got less than 400 likes and over 2,300 dislikes at the time of writing; it was unclear if YouTube intervened to throttle the latter. As usual, comments were turned off.

By contrast, Biden’s guest appearance on the outdoor adventure channel Brave Wilderness last month – part of an effort to push Covid-19 vaccination – got nearly 900,000 views, though its 36,000 dislikes still outnumbered the 26,000 likes.

The event featured such hard-hitting journalism as asking Psaki if she’d ever come “into contact” with singer Lady Gaga, who performed at Joe Biden’s inauguration.

The answer, in case you wanted to know, is no – but Psaki did say she “blasts” her music in the car sometimes.

While it didn’t seem to have made much of a splash on social media, Psaki’s event did prompt some ribbing from the online opposition. Conservative commentator Ben Shapiro mocked the “very, very serious administration,” while classical liberal Dave Rubin said he would’ have brought cookies had he been invited – a reference to Psaki’s treats to the White House press corps recently.

VICE writer Ashwin Rodrigues, in what was presumably a joke, asked if anyone “recorded” Psaki’s briefing with the “internet stars” because he “skipped the birth of my child to watch” but lost internet connection.

While Psaki has been popular among the online Democrats, her guests may not have had as much star power as the White House had hoped. Many of the online reactions amounted to “who are these people?” with the most famous being Jonathan and Drew Scott of the ‘Property Brothers’ reality-TV show.

“If you’re confused about how the Property Brothers or American DJ Hannah Bronfman got lumped into the category of ‘internet stars,’ so are we,” they wrote. “If you’re equally confused about why this group of influencers is joining a briefing with the White House about jobs, the economy, and what the future looks like for American families, we’re right there with you.”