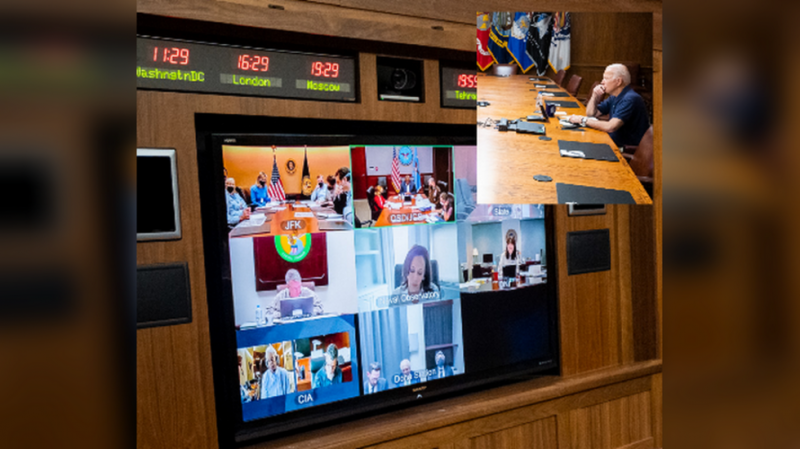 The official White House Twitter account posted a photo on Sunday of Biden meeting by video conference with intelligence officials to hear updates on the drawdown of civilian personnel, “the ongoing security situation in Kabul” and evacuations of Afghan allies, including interpreters who helped US and NATO forces during the 20-year war. The picture showed other meeting participants on a large screen, including CIA officials and three men at the “Doha Station.”

One Twitter user quipped, “Umm, is the public supposed to see the faces of the CIA agents? Are we supposed to know there is a Doha Station?”

The White House tweet may have been meant to portray Biden as actively involved in the evacuation from Afghanistan amid criticism that he was silent and on vacation while the Taliban was recapturing the country and triggering a rushed evacuation of Americans and allied Afghans from Kabul. Supporters of the president used the photo to brushed off the criticism, insisting it shows that Biden is preoccupied with the crisis.

The planned US withdrawal from Afghanistan has turned into a disaster for the Biden administration after the Taliban overran 26 provincial capitals out of 34 in the weeks after last US troops left Bagram’s airfield, their main military base in Afghanistan.

Biden has faced backlash for apparently gravely underestimating the Taliban and overestimating the ability of the US-trained Afghan forces to withstand the assault. In July, Biden predicted that the Taliban wouldn’t overrun the country and that the evacuation would be nothing like the fall of Saigon in 1975, when US embassy staffers had to be plucked from the rooftop to escape North Vietnamese forces. On Sunday, two CH-47 Chinook helicopters were seen evacuating US embassy staff in Kabul as Taliban fighters entered the city and Afghan President Ashraf Ghani fled the country.

The White House video conference tweet became more fodder for mockery. Biden supporters argued that identities of the people who appeared on the videoconference screen weren’t necessarily secret, but other observers said the existence of the Doha Station was not publicly known.