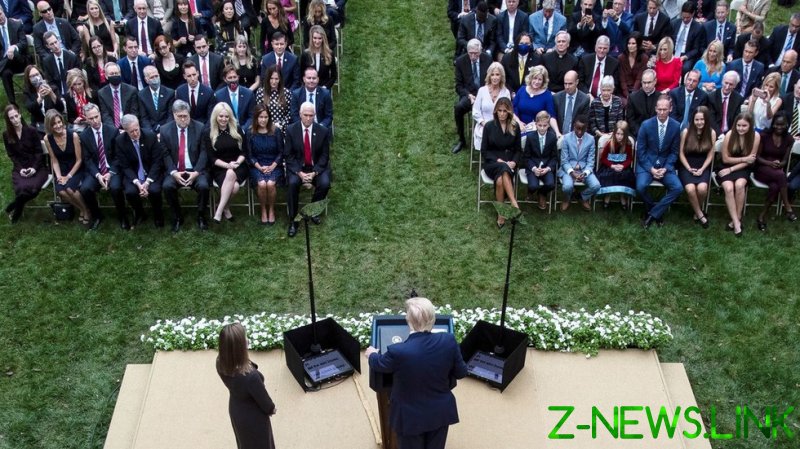 In addition, the president and the first lady, a White House staffer, three journalists who work at the White House and University of Notre Dame President Rev. John Jenkins have also contracted the illness. All 10 attended the White House event last Saturday, stoking concerns of a “superspreader” event.

Both Lee and Conway were filmed in close contact with other attendees at the White House event – where the president announced his new Supreme Court pick, Amy Coney Barrett – with Lee seen doling out hugs to multiple people, while Conway stood mere inches from Attorney General Bill Barr as the two spoke.

Lee, who sits on the Senate Judiciary Committee alongside Tillis, said he would remain in quarantine for 10 days, but assured that he would be back to work “in time to join my Judiciary Committee colleagues in advancing the Supreme Court nomination of Judge Amy Coney Barrett.”

“Unlike the test I took a few days ago while visiting the white house, yesterday’s test came back positive,” Lee said in a statement.

Tillis went public with his own diagnosis later on Friday, saying in a statement that after months of routine tests for the virus – including during his visit to the nation’s capital last Saturday – the result finally came back positive. He added that he is currently experiencing “no symptoms” and feels “well.”

Conway’s announcement came late on Friday night. Though she said she has mild symptoms, including a “light cough,” she noted she is “feeling fine” and had entered self-isolation “in consultation with physicians.”

The string of positive coronavirus tests began on Thursday evening, after senior Trump adviser Hope Hicks was confirmed to have contracted the illness after accompanying the president to multiple campaign stops, including on Air Force One.

The president and first lady’s diagnoses came just hours later, and Trump has been moved to Walter Reed National Military Medical Center for treatment “out of an abundance of caution,” according to the White House.