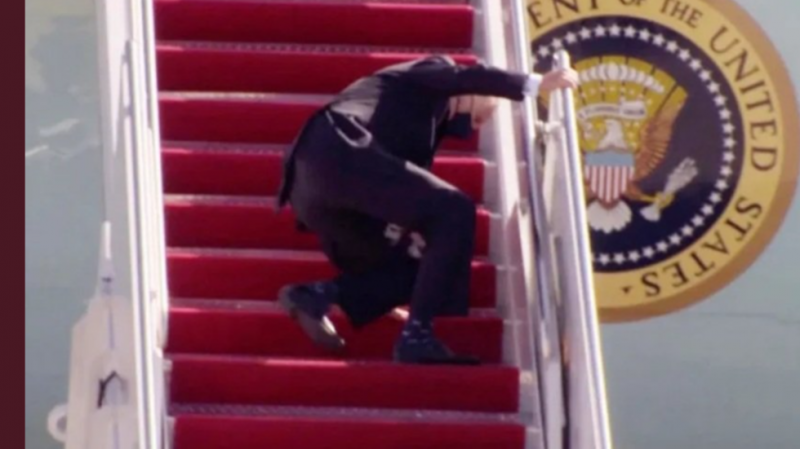 Asked at Monday’s White House press briefing whether Biden is well following his fall on Friday, Psaki defended the president, saying, “He’s 100 percent fine. I don’t know if you’ve been up those steps. They’re a little tricky sometimes.”

Psaki added that she wasn’t aware of Biden needing “extensive medical attention” for any wounds he may have suffered from the fall. When another reporter pointed out that she hadn’t said “no” regarding the need for medical attention, the press secretary noted that a doctor travels with presidents on all Air Force One flights, meaning she was allowing for the possibility that the physician examined Biden.

“I’m just trying to be completely transparent,” Psaki said. “He’s absolutely fine, as he was on Friday and was this weekend. He spent the weekend at Camp David. He’s good.”

Biden was boarding a flight to Atlanta, where he and Vice President Kamala Harris met with Asian American community leaders and lawmakers in response to last week’s murders of eight people, including six women of Asian descent, at three massage parlors.

His fall was roundly mocked by conservatives, while former president Donald Trump quipped that as he watched footage of the incident, he said, “I didn’t lose to him.” Psaki’s latest explanation invited more ridicule.

“I’m waiting for her to say the stairs were inherited from the previous administration, and are admittedly racist steps,” a self-described “black satirist” said on Twitter. Another observer joked that the incident proved that Biden stayed in his basement throughout the presidential campaign because he was unable to climb the steps.