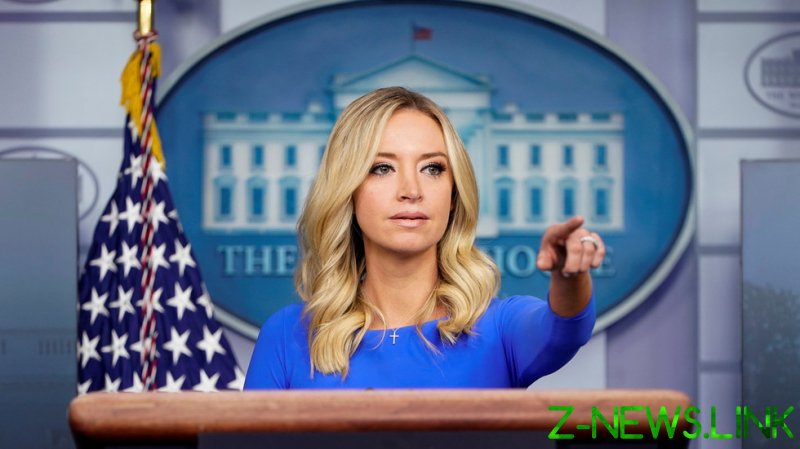 McEnany announced her test results in a statement on Monday, adding that she had tested negative “consistently” every day since Thursday – the night President Donald Trump and his wife tested positive for the novel coronavirus.

The press secretary insisted she had no knowledge of Trump adviser Hope Hicks’ own positive diagnosis before holding Thursday’s White House press briefing. Hicks is believed to be the vector for infecting both the Trumps and other members of the president’s inner circle.

McEnany promised to “begin the quarantine process” and “continue working on behalf of the American People remotely,” reassuring the country that she had not had close contact with any “reporters, producers, or members of the press” since becoming infected.

Like President Trump himself, McEnany has come under fire by the administration’s political opponents for declining to wear a mask at all times, including during Thursday’s press conference following Trump’s diagnosis. That criticism amplified after both Trumps, former adviser Kellyanne Conway, and campaign manager Bill Stepien tested positive for the virus following a White House event celebrating the president’s nomination of Amy Coney Barrett to fill the Supreme Court vacancy left by Justice Ruth Bader Ginsburg’s death.

Trump, 74, spent the weekend in Walter Reed hospital following his diagnosis. He was said to be receiving an extensive list of drugs including the experimental antiviral remdesivir and equally-experimental antibody treatments, despite appearing healthy in his last public appearance outside the hospital, fueling speculation from both his fans and detractors. While Covid-19 has a survival rate upwards of 99.5 percent, obesity and old age are serious risk factors for complications.

The subject of whether individuals who test positive for Covid-19 without themselves manifesting symptoms can transmit the virus to others has been hotly debated in recent months. First the World Health Organization, then more recently the US Centers for Disease Control have stated asymptomatic carriers are not a transmission risk before quickly reversing course.