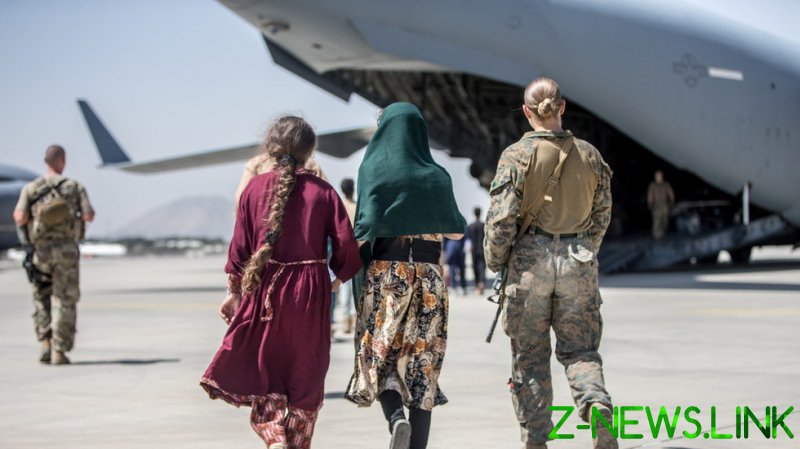 Biden has decided to stick with the Pentagon’s recommendation that all US troops and civilians permanently leave Afghanistan by August 31, an administration official told Reuters on Tuesday. Amid rumors that Biden would postpone the pullout, the US military recommended on Monday that his administration stick to the deadline, citing security concerns.

The security situation in Kabul is tense, and though American troops hold the city’s airport, “thousands” of Americans, in the words of National Security Adviser Jake Sullivan, remain unaccounted for in Kabul, with the path to the airport controlled by Taliban militants. Save for a handful of helicopter missions, US troops have not ventured out into Kabul to locate Americans like their British and French counterparts have for their own citizens.

The US is evacuating thousands of people per day, flying out 11,000 in one 36-hour period over the weekend, as Biden boasted on Sunday. Yet as of Monday, less than a quarter of the 26,000 people evacuated in the past week were American citizens, according to a diplomatic cable seen by Politico. More than 21,500 were Afghans, some who worked as translators for the US military over the course of the war, and others seeking refuge in the West.

The State Department figures cited above are believed to be lower than numbers put forward by the Pentagon and the White House, the latter of which counts 37,000 people evacuated since the fall of Kabul.

Biden has reportedly asked the military to draw up contingency plans, should the deadline be missed. However, the Pentagon is “absolutely still aiming towards the end of the month,” spokesman John Kirby told reporters on Tuesday.

While Biden and his generals may have got their messaging in order on the deadline, contradictory statements are still flowing out of Washington. House Intelligence Committee Chairman Adam Schiff (D-California) has cast doubt on the administration’s goal.

“I think it’s possible, but I think it’s very unlikely given the number of Americans who still need to be evacuated, the number of SIVs, the number of others who are members of the Afghan press, civil society leaders, women leaders,” Schiff told reporters after a briefing by intelligence agency chiefs on Tuesday, with “SIVs” referring to Afghan translators and their families granted Special Immigrant Visas.

“It’s hard for me to imagine all of that can be accomplished between now and the end of the month,” he added.

Republicans, meanwhile, have used the haphazard nature of the evacuation to hammer the Biden administration. Senate Majority Leader Mitch McConnell, an opponent of withdrawal in the first place, told Fox News on Tuesday that the pullout was “a gargantuan mistake.”

“These guys couldn’t organize a two-car funeral,” he quipped, suggesting that Biden extend the deadline and “make sure that every single American who wants to leave is able to get out with our assistance, and our Afghan allies.”

As news broke of Biden’s plan to adhere to the deadline, the president sat down to a virtual meeting with G7 leaders. A joint statement released after the meeting made no mention of the deadline date, but British Prime Minister Boris Johnson said afterwards that the Taliban must “guarantee safe passage” for anyone left behind after the cutoff date.

The Taliban however, has warned of “consequences” should the deadline not be met, and on Tuesday the militant group announced that it would only allow foreigners to enter the airport, both to speed up the West’s departure from their country and to avoid the mass exodus of Afghanistan’s educated elite.