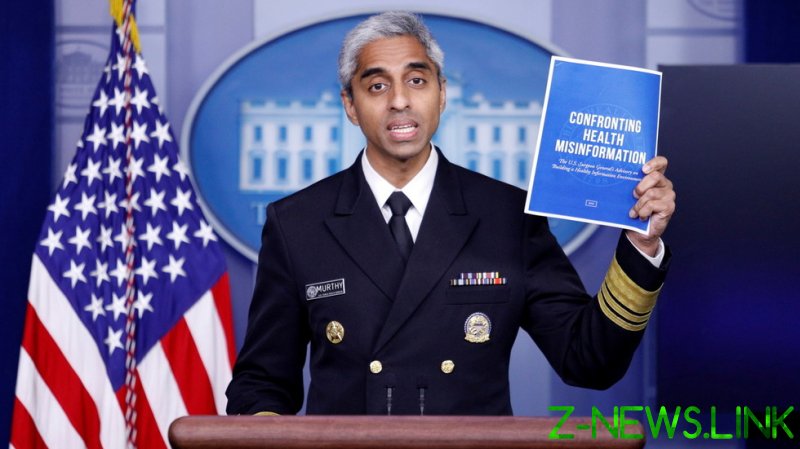 “We’re flagging problematic posts for Facebook that spread disinformation,” White House press secretary Jen Psaki told reporters on Thursday. In addition to directing the company to censor people, the government is also working to “get trusted content out there” by putting medical professionals in touch with social media influencers.

“Misinformation takes away our freedom to make informed decisions about our health and the health of our loved ones,” Murthy said at the White House. During just the Covid-19 pandemic, it has led to Americans refusing to wear masks, “turn down proven treatments” and choosing not to get vaccinated, which, he said, cost lives.

Murthy is a “tyrant” who wants “Big Tech to crack down on what amounts to open inquiry and free exchange of ideas,” commented journalist Jordan Schachtel, one of the notable skeptics when it comes to official pandemic narratives.

Looking at the surgeon general’s recommendations, Grabien’s Tom Elliott pointed out that the government is literally instructing private companies to “abridge the freedom of speech, and of the press, and the rights of people to peaceably assemble and petition the gov’t for redresses of grievances” – in other words, violate the First Amendment of the US Constitution.

Journalist Glenn Greenwald, who helped publish NSA whistleblower Edward Snowden’s revelations about surveillance abuse in 2013, called this union of corporate and state power “one of the classic hallmarks of fascism.”

“If you don’t find it deeply disturbing that the White House is ‘flagging’ internet content that they deem ‘problematic’ to their Facebook allies for removal, then you are definitionally an authoritarian,” said Greenwald.

“This is ‘Ministry of Truth’ level malfeasance. They’re literally admitting to colluding with [the] media to control the narrative. This is censorship,” tweeted Congressman Thomas Massie (R-Kentucky), adding that such tactics befit dictatorships and that throttling speech with which the government disagrees crosses a line.

“If your ideas are the best, they can stand on their own. Censorship will make people question it more. Every. Single. Time,” she tweeted.

Democrats have clamored for social media to censor “misinformation” ever since the 2016 election, which resulted in the surprise victory of Republican Donald Trump over mainstream media favorite Hillary Clinton. The Trump campaign had bypassed corporate gatekeepers by reaching out to Americans directly via Twitter, Facebook, and other social media.

Four years later, under the pretext of fighting misinformation and “Russian interference,” thousands of users had been purged from the platforms, while Twitter and Facebook suppressed a newspaper for publishing a story about Joe Biden’s son Hunter and the information found on his laptop. They also cracked down on any questions about new electoral practices, such as mass mail-in voting, labeling them “misinformation.”

The Biden campaign actually demanded Facebook censor Trump himself for “misinformation,” which the platform initially refused to do.

Eventually, however, Trump was banned from all social media platforms – while he was still the sitting president – as much for allegedly “inciting violence” over the January 6 riot at the US Capitol, as for continuing to argue the 2020 election wasn’t honest.