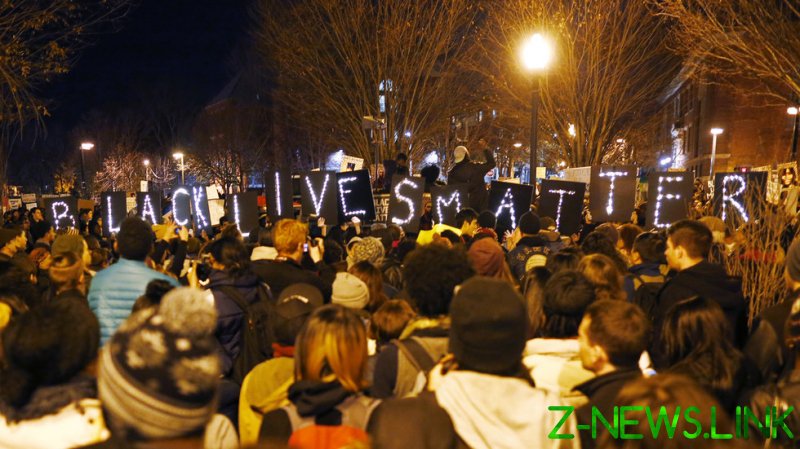 Tory Russell, who co-founded Ferguson’s International Black Freedom Alliance, appeared in a video alongside the father of the late Michael Brown on Tuesday, calling on BLM’s national leadership to send a cool $20 million to the IBFA and other community groups.

“Today, we hold Black Lives Matter accountable. The movement that has catapulted into the limelight has forgotten about Ferguson and the freedom fighters,” Russell said, noting many local activists have become “political prisoners.”

Russell said the funds would go toward “Black Panther-style” mutual aid programs, such as community gardens and farms, as well as “annual commemorations” of Brown, who was fatally shot by a Ferguson police officer during a scuffle in 2014, helping to propel the BLM movement into worldwide prominence. He also suggested the creation of “organizing fellowships and stipends” so local groups can “fight white supremacy full-time.”

“What kind of movement are we building when we’re saying ‘Black Lives Matter,’ but the freedom fighters and the families are being left behind?” Russell went on. “Where’s our restitution, where’s our organizing, where’s our building of a movement?”

The IBFA took to Twitter on Wednesday night with an update, saying it hadn’t yet heard back from the BLM leadership but that a local chapter had reached out in “solidarity.” City and state-level BLM branches have also sparred with the org’s Global Network, with a DC chapter issuing a blistering statement last November accusing the group of “undermining the work and integrity” of grassroots activists.

“Despite millions being donated to the network, local chapters have lacked support & resources from national leadership. As a result, much of our local community work continues to be erased,” the DC outfit charged, insisting the Global Network “is NOT accountable to local communities nor local chapters.”

Nyota Uhura, a longtime activist from St. Louis – located some 12 miles south of Ferguson – told RT last July that the broader BLM organization is effectively an ‘astro turfed’ movement that co-opts local activism in service of the Democratic Party.

“They overshadow the work of the grassroots, then they insert themselves as leaders and they go out in the media and claim to be leading these movements,” Uhura said, adding that establishment progressive groups “use the energy of our movement to push their agenda.”

Between 2017 and 2019, the BLM Global Network spent nearly $4.6 million on consulting, travel expenses and staff salaries, while just $328,000 was divided between dozens of local chapters and other “outside organizations,”according to documents obtained by the Daily Caller. A representative for the Global Network argued, however, that those figures did not reflect the “in-kind support” it gives to those smaller groups, and that more than $770,000 had been provided to local chapters between June 2019 and April 2020.

The Global Network raised a whopping $90 million in 2020 alone, and, faced with harsh criticism from local branches, said in its latest “Impact Report” that it distributed nearly a quarter of those funds to chapters, adding that was well above the charity “industry norm.”

The purported boost in funding did little to quell the internal rebellion within BLM’s local branches, as nine other chapters joined the DC organization in castigating the group’s leadership for a lack of support in transparency in November. In a joint statement, the 10 branches charged that “most chapters have received little to no financial support from [the Global Network]” since its launch in 2013, and that limited funding had only begun in the latter half of 2020.