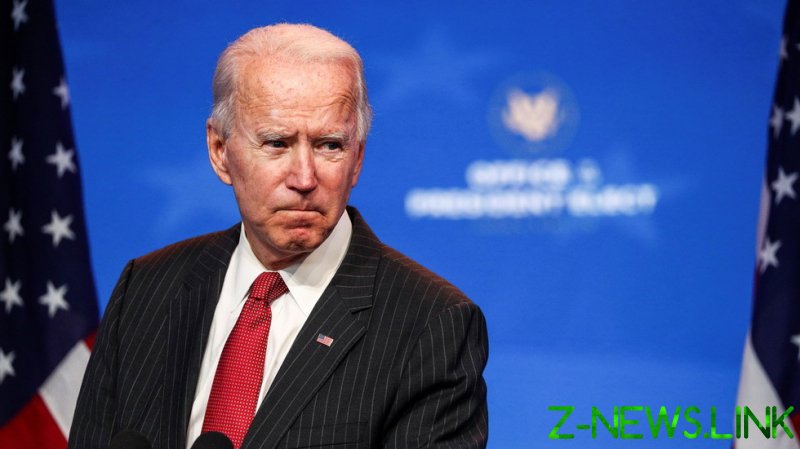 Monday marked Joe Biden’s 47th day in office, and also his 47th without appearing before the press to take questions. The president has sat down to several taped interviews, and has given brief soundbites to reporters at events, but not a single proper Q&A session has materialized.

He has gone longer without holding a press conference than any of his 15 most recent predecessors, all of whom faced the media within their first 33 days in office. Donald Trump waited 27 days, while Barack Obama – Biden’s old boss – held his first after just 20 days.

Many in the mainstream media were ecstatic when Biden was inaugurated, after four years of sometimes open hostility toward Trump. Yet even the most pro-Biden liberal news outlets are beginning to demand an appearance from the president.

“It’s past time for Biden to hold a news conference,” the Washington Post’s editorial board declared on Sunday, three days after opinion writer Erik Wemple wondered, “When will Biden hold a press conference?”

CNN’s Brian Stelter – one of the media’s most enthusiastic Biden supporters – described White House reporters as “clamoring” for a Q&A session with the president, while The Hill accused him of “dodging the public and the press.” News outlets on the liberal side of the political spectrum have all begun to ask the same questions and issue the same demands. “Whither news conferences? Step up to the podium, Mr. President,” to quote the San Francisco Chronicle on Sunday.

Biden has much to discuss with the press. He has signed more than 50 executive orders, attacked a foreign country, overseen a natural disaster, and stands ready to sign a $1.9 trillion coronavirus relief bill. Meanwhile the US Capitol remains fenced off with razor wire, and thousands of National Guard troops are still patrolling Washington DC, amid dubious rumors of right-wing political violence.

Biden promised to lead a transparent White House, with campaign staff pledging an “open” relationship with the media. To that end, Press Secretary Jen Psaki has held daily briefings, but has made a habit of evading tough questions and promising to “circle back” to reporters with more information.

Liberal news outlets have mostly avoided asking why Biden hasn’t held a press conference, but conservative ones have begun to publicly speculate. “Obviously he’s struggling cognitively,” Fox News host Sean Hannity said last week, a day before contributor Joe Concha claimed Biden’s team “has zero confidence that this president can handle questions outside of handpicked reporters.” Also appearing on Fox last week, Trump administration Press Secretary Kayleigh McEnany said Biden’s “staff does not have faith that he can stand at the podium and have a press conference the way President Trump did many times.”

McEnany blamed those staff members for refusing to schedule a press conference, saying Biden himself “seems to relish” the chance to “joust back and forth” with reporters. However, she speculated that those same staff are likely concerned that “when he does speak, it doesn’t always turn out so well.”

Other conservatives have not put things so mildly. Biden frequently loses his train of thought, even during scripted remarks, and this forgetfulness fueled rumors of cognitive decline during his presidential campaign. Most recently, he forgot the names of a list of guests at an event in Texas, and part way through naming the attendees, paused and wondered aloud, “What am I doing here?”

After repeatedly punting on the question, Press Secretary Psaki said on Friday that Biden would hold a press conference “before the end of the month,” adding that the president had been busy addressing the Covid-19 pandemic and the resulting economic downturn. However, concerns over Biden’s elusiveness remain, as he has also given no date for a State of the Union (SOTU) address, or even the customary ‘Address before Congress’ that newly inaugurated presidents usually give in lieu of a full SOTU speech.

He will, however, deliver a prime-time address on Thursday to mark the one-year anniversary of Covid-related shutdowns taking place across the country. Announcing the address at Monday’s press briefing, Psaki did not specify a time or a place, and made no mention of Biden taking questions afterwards.