Home / WORLD / ‘Where were you a month ago?’ With Trump gone, Amazon greets Biden with offer to help speed distribution of Covid-19 vaccines

‘Where were you a month ago?’ With Trump gone, Amazon greets Biden with offer to help speed distribution of Covid-19 vaccines 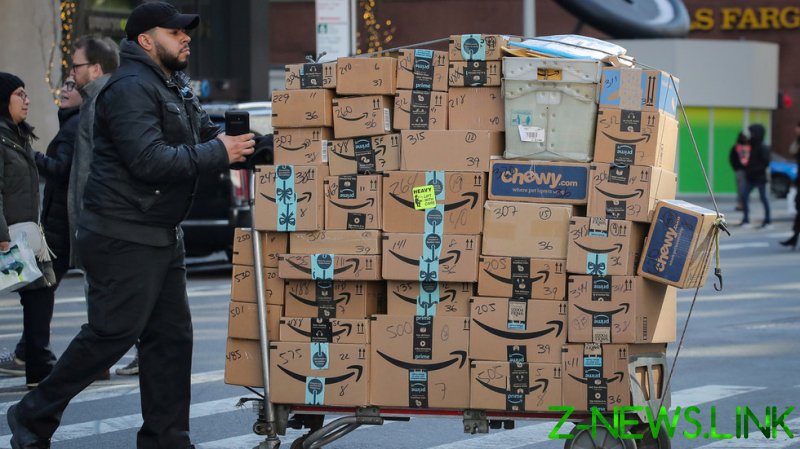 “Amazon stands ready to assist you in reaching your goal of vaccinating 100 million Americans in the first 100 days of your administration..,” Dave Clark, CEO of Amazon’s consumer unit, said Wednesday in a letter to Biden.

Trump and Amazon CEO Jeff Bezos have feuded since at least 2015, and Amazon political donors favor Democrats over Republicans by a wide margin. Just as US House Speaker Nancy Pelosi admittedly stalled Covid-19 relief legislation to avoid letting Trump look good – and just as Pfizer was accused of delaying news of its positive vaccine trial results until after Trump lost the November 3 election – Amazon may have had political reasons for timing its offer to Biden’s inauguration, social media users suggested.

“Good to know you care more about your political agenda than [the] lives of Americans,” one Twitter user said. “Where were you a month ago?” Another commenter agreed: “Amazon is now offering China Joe help to get the vaccine out to America. So, in other words, Amazon chose to let Americans die instead of doing this during the Trump administration.” Those who died while Amazon held back its help were “just collateral damage to the left,” still another observer said.

Author and comedian Tim Young said Amazon was silent for weeks after US vaccinations began in mid-December, “because ‘Orange Man bad’ was more important than caring for fellow Americans.”

A Twitter user known as RBPundit alleged that Amazon worked with the Trump administration task force on vaccine distribution to sort out the details of its plans to help, then waited for Biden’s inauguration to announce its offer.

In its letter to Biden, the online retailer reiterated a request to move its 800,000 US employees up the priority list as early vaccine recipients and said it has made arrangements with a health care provider to administer inoculation shots to those workers on-site, at all of its facilities. “We are committed to assisting your administration’s vaccination efforts as we work together to protect our employees and continue to provide essential services during the pandemic,” Clark said.

While campaigning, Biden warned of a “dark winter” with a horrific rate of Covid-19 deaths, which he blamed on Trump. With Biden now installed as president, Amazon’s offer to accelerate the vaccine rollout may be just part of a change in political tone around the virus.

“All of a sudden, Amazon offers their facilities for the vaccine,” podcast host Brian Craig tweeted. “You will see Covid-19 disappear almost overnight. Just watch.”