Where is our money? 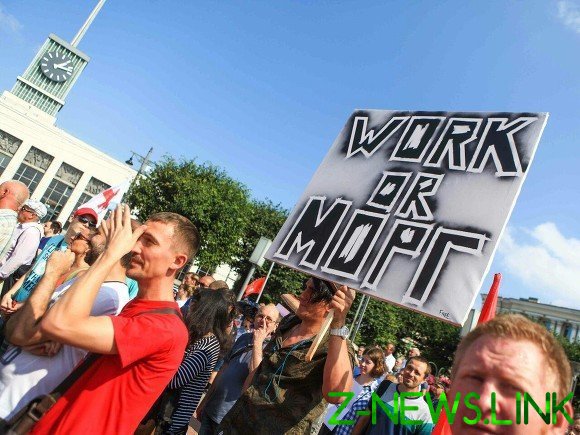 Russians often think about why they work so much and get so little. The answer of economists is simple: the rich get richer, the poor get poorer.

Russia dissatisfied with the level of his salary, mostly workers and freelancers. Rosstat States that the average salary in the country reaches 46,549 thousand rubles. However, citizens who receive twice less, such statistics do not believe. Economists also believe that the official figures may be overstated. The number of poor — people whose incomes are below the poverty line, even according to Rosstat, more than 17 million people (12% of the population).

Oleg Shein, member of the Duma Committee on labor, lipolytica and veterans ‘ Affairs, Vice-President of the Confederation of labour of Russia:

“Dissatisfaction with wages, of course, objective. We have no information on the real average salary in the country, as the Russian statistics are highly distorted by the huge share of informal employment. But if we talk about the minimum wage, then Russia occupies 79th place in the world in conditions when our economy is on the 48th place. In these figures it is obvious a huge social inequality. People don’t receive their salaries. In a typical distribution model adopted in the modern global world, the minimum wage of the citizens of Russia would be significantly higher than today. Well, the average wage, of course, is also a concern.

Serious things demand complex solutions, and the main problem we have in the legislation. The first thing we should say is raising the minimum wage. It can be fairly painless raised for the public sector to the level of about 18-20 thousand rubles. The second is the legalization of employment in the real sector of the economy. Today, up to 30 million people are paid “under the table”, neither of which the highest wages in the country, however. People who are in a dependent position, which can be fired at any time, can’t fight for increasing their salaries.

The solution to this problem requires a serious legislative changes in taxation and penalties of business, resorting to slave labor, and clipping this kind of business from state contracts, orders and purchases. It will also require a different distribution of the Russian budget.

As a result of these measures, we will have a synergy effect. The legalization of labor and, together with the clipping of the models overtime overtime will lead to higher average salaries and lower unemployment. Overtime, does apply in the informal segment of employment, in fact, mean the following: where you need three people, two runs and a third thrown in unemployment. On this third businessman shows his finger and says will demand something, for example, output Sunday, your place will come the other. Thus, cutting off overtime — with the legalization it will be inevitable — will ensure higher employment and higher average payroll for the working class in Russia.

But given that the current government sits in power already twenty years and to solve the problem is not going, it is obvious that changes should not wait”.

“For five consecutive years of falling real disposable incomes, reflecting the accumulating crisis of the Russian economy, and moreover, against this background of growing social inequality. People see that the money is there, the economy is showing some growth at 2%, but the whole national income is distributed in favor of a narrow social group — people who belong to the ruling class, possessing the property of the means of production. One percent of the population in our country belongs to the 70 percent of tangible assets. For this reason, the dissatisfaction of the majority of people is completely understandable.

Another thing is that this dissatisfaction is often superficial and individualistic nature. This is particularly bad, I want to pay more, and that was it. People don’t always understand the source of these problems. It’s not what exactly their company does not raise wages, and that in the whole Russian economy, the mechanisms of redistribution of national income are working very inefficiently.

In General, we have is an inefficient system of taxation. The state provides preferential treatment of big business, commodity companies, and manufacturing firms, small businesses are oppressed conditions. This naturally affects the employee. Therefore, the causes of the problems lie much deeper than simple greed of local fine head of a particular enterprise.

Over the past year we have significantly increased the minimum wage, bringing it finally to the level of the subsistence minimum, up to 12 thousand rubles. It would seem that this is a progressive measure, for a long time, we have the minimum wage was below the subsistence minimum. But when this value has risen, real income has not increased. Some categories of workers incomes have fallen. Why? Because before the employee, for example, receiving 15 thousand rubles, was officially formed on 8 thousand and only have to pay taxes, and the rest is received in the envelope. Now with the same meager salary he formalized at 12 thousand, and taxes paid on them, and the rest gets in the envelope. Thus, due to the increase in the minimum wage at the hands of the employee gets less. So it is understandable why people negatively perceive the phenomenon of the growth of tax collection in Russia — and in recent years it has grown considerably at the expense of information gathering, electronic communication and document management. Main question is: where are these taxes?

We have a budget surplus, the government has accumulated excess reserves. Where they’re headed is not clear. Social problems are not solved. Even those mega-projects are planned until 2024, are not implemented in full, the funding for them is not allocated in sufficient volume. In humans, the question arises: why should I work “vbeluyu” if the money is not channeled to progressive goals, but in fact distributed among the representatives of the ruling class or remain in the reserves?”

“Of course, employees are always dissatisfied with the salary. But in our case, the problem is that in 2014-2016, our revenues in dollars very much fell. And many reduced wages in rubles. These losses are not compensated even where there was an increase in ruble salaries, return premiums, at least partially.

The standard of living for the consumption for the majority of citizens remains much lower than it was in 2013. In this situation, when the authorities warn about the fact that we have economic growth of 2%, sales growth and everything we have is great, people feel aloof from this process. “Such a growth, export growth, maybe we should get a big salary because we are very much lost in 2013?”. But wage growth is not. Growth rates — there. The tax pressure on households increases. So people quite reasonably put the question that the money is not enough.

Doctrine of the Russian government in the last few years is that export growth will make it better. That is, we were the second wave of the global crisis 2014-2016, and although the sales of many goods below the 2013 level, but will be corrected according to increasing Russian exports and the implementation of domestic infrastructure programs, with the result that wages gradually catch up. But this effect does not work.

Status of the richest people in the result of such a policy are rising, but the incomes of ordinary citizens are not growing or at least grow very slowly. Social state policy is not conducive to the overall welfare of households.

Some of the measures in the fight against serbenescu is. In particular, in 2018, the minimum wage tied to subsistence level, which did not exist. This caused discomfort for some employers in the regions they are accustomed to paying absolute pittance, even below the subsistence level. However, the state policy to increase wages, which would not be at the same time the policy of increasing the burden on the public sector employees, I do not see. If you take state employees — teachers, University professors, doctors, there was a popular labour productivity. That is money pay more, but the half of you that is terminated, and the load on the rest increase two times, respectively, the increase in wages. Those in this position were often simply howl from toil. The result — where I can just emulate.

Of course, we need another policy that the state paid more in the public sector. If to speak about last year, the prevailing approach has caused a crisis in health care across the country, the dismissal of doctors. The miserable salary of health workers led to their outflow regions. This time of crisis says we need to start paying people.”

Georgy Fyodorov, President of the center for social and political studies “Aspect”:

“The discontent of Russians the salary speaks not only about the salary. She’s even growing in some regions. But we have six years of falling absolute incomes. Here’s what we have people working and receiving salaries, are getting poorer, it is certainly annoying.

Power, I think, sees what’s going on. Even Vladimir Putin recently said that we are falling absolute incomes. Accordingly, the government has this information. And if she wanted, she would change the socio-economic policy. Now this course is under construction in favor of corporations, big capital. And the first priorities of government is to support big oligarchic States.

Any dissatisfaction can be converted into a political one. Wages can also be a brick of political discontent. The government understands this. But the question is how critical dissatisfaction with this. Because there is still a lot of segments that operate on individuals and cause them to have resentment”.