When the people and the government will share the property? 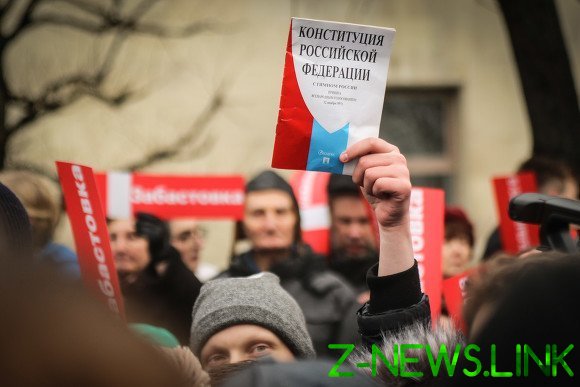 Electoral scandals in the capitals are not new. But in the current atmosphere that previously no one cared, creates political crisis.

How much, however, in our intellectual circles was willing to laugh at the fuss raised by citizens around the elections in Moscow, Russia (city Duma) and in St. Petersburg (the Governor and municipal deputies). Like you don’t live here and watch the moon.

If you mentally travel to the moon, then they really can’t argue.

Yes, the Moscow city Duma and the St. Petersburg municipal Council was never a decision-making centers. There is a trough and the chair of honour for the people of the lower and mid-level nobility. Support anyone’s fight for them, if you look at it from afar, appears at best naive.

And Yes, the head of Petersburg was early and needs to stay committed to the person vertically. Therefore, all competitors that look able to stop him, can’t qualify for a row in the ballot next to the candidate number 1. Now to compete with the acting Governor Alexander Beglov was not allowed Boris Vishnevsky. But last time, in 2014, in exactly the same way, with the help of the municipal filter, Oksana Dmitrieva was not allowed to compete with temporarily performing the same duties Georgy Poltavchenko. No novelty. On the contrary — tradition.

And of course, all of these filters, charges exorbitant number of signatures and other humiliating treatments specially devised by the authorities for the so-called non-systemic opposition, first of all, to involve them in the execution of humiliating rituals in going to the authorities to complain on the devils fucking grandmothers, and in the final — throw them out of the game. Not to mention the fact that the representatives of the non-system asset living from one election to another performance, are not perceived as an alternative policy, but as actors, for some reason, agreed an infinite number of times to execute the same a losing role.

This is a criticism, it seems to be smart and beating the nail on the head.

But, like any criticism from the moon, it does not pick up changes in the atmosphere. On the moon because of no atmosphere. But in our lives it is, and it negates the most logical conclusions.

Yes, in the fall of 2014, Georgy Poltavchenko, is not the, to put it mildly, a popular St. Petersburg mayor playfully, but walked four put in the Bulletin and collected (on the report) unprecedented 79% of the vote. Any shock to the townspeople it was not, legitimacy Poltavchenko did not diminish and any kind of moral victory removed Dmitrieva has not brought. And that long September day was born the current loyalist the Moscow city Duma, and the protests of non-admitted sistemschikov gone into the void. The people did not listen to them, the bosses even more so.

See also:  Walker spoke about the goals of the USA in Ukraine

Now inadmissible Wisniewski says would benefit from Beglov. Not everyone would believe something like that, but the moral success is clearly on the side of the Vishnevsky. At this time, locals followed the work of the filter and he appeared in a very bad light. In part, the townspeople noticed even then, which he had not seen in focus — caboteniasa the shamelessness of the municipal election commissions. Many of them before even heard, not that interested in their works?

And Moscow scandal — a phenomenon almost of a national caliber. I say “almost” because the streets are not “all Moscow”, and only a few thousand people. But in the past for some of the city Duma in General almost nobody left. And now hundreds of thousands of Muscovites took part in collecting signatures, who was conceived by the authorities as a trap for non-system, that was easy to catch the fakes. And suddenly it becomes a trap for the community of breech brakovska signatures. They, as in past times, do what trained — marriage. But in that time signature — natural. The signatories come out of himself. And a lot of them.

What has changed? Residents of the capital suddenly became stupid? Believe in the importance of our elected bodies?

I don’t think. Changed, again, the atmosphere. Five years ago, postkrymsky in the autumn of 2014, people have recognized the boss the right to settle as it considers necessary, including elective rituals. Even if something in the shower and thought ugly then are close to heart did not accept.

Those days are gone. First, the mood changed gradually, and then, last summer, sharply. The turning point was the pension reform. People divorce with the authorities gathered momentum.

In search of indicators of this process refer to the falling ratings. Ratings — a good thing, but certainly not the only one. Perhaps says less about the divorce, the collapse of the “United Russia”? In 2018, the EP timid overcame resistance in their ranks, legitimized the reform of pensions and commit seppuku. This season, the state-owned Governor and members of the masses are both independents, but would not bet on this brand. But the EP — not the Communist party, not the government machine. This is just one of the Drapes that cover the authentic machinery of power. And so she flew. Just because angry citizens don’t want to pretend to take it seriously.

See also:  Germany: office of the government delivered a package with a grenade

Another drape — election. Conceived as a celebration of the people’s obedience, they bring now only the authorities the trouble and grief. Last fall it came to the failure of several state-owned candidates in governors.

Attempts, so to speak, to learn lessons from recent failures in the current election season to further tighten the screws only reinforce people’s irritation. “Produce disloyalty,” as noted by one expert. People were humbled, and sometimes be touched when they manipulated the mode that they approve. And now, when they are trying to manipulate the regime does not approve of, they get mad at him for more.

Now I like him, unloved, every bass string. Elections, which he started, is a good opportunity to tell him about my feelings. Along with other cases. In a new atmosphere, the number of local protests with a variety of subjects inevitably grows, as we see in the less intellectual but perhaps more alive than our capital.

Once discontent became permanent, for the protests fit any occasion created upstairs. And our state machine is calibrated to produce the reins smoothly.

Here we are now changes, when viewed not from the moon.

Ask yourself, what’s next? I do not know. The advice of well-wishers who (also usually from a distance) trying to persuade our bosses to become wise and for their own benefit to give a little seats sistemskim — they say, nothing can change display unfamiliarity with the current feelings is not the bottom and the top.

Nomenclature is also difficult because suffered a shock retirement reproaches, and her dislike of not knowing their place, people have risen to a new level. To rule without drapery, without any there of “soft power”, just a steady hand, or at least try something to do and see that will is her, or at least most are now closer than game in liberalism.

Anyway, the divorce of the people and the authorities does not necessarily mean that the proximity of the end system. Unpopular regimes often settled for the long haul. Although not forever.