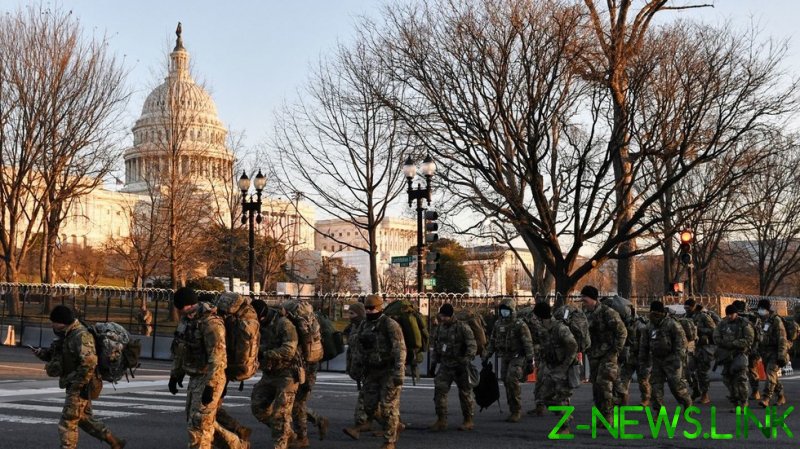 Apparently spooked by the January 6 election-fraud protest that bubbled up into the US Capitol riot, US Representative Ann Kuster (D-New Hampshire) and several other House Democrats wore body armor under their jackets, Politico reporter Sarah Ferris said. ABC News and other outlets also reported on the extra layer of protection that some Democrats wore, without identifying those who did so.

This year’s security precautions were unprecedented, with unscalable fencing erected around the Capitol, police checkpoints set up and public events such as the traditional inaugural parade canceled because of the Covid-19 pandemic. The 25,000 National Guardsmen brought to the city marked the largest troop presence in the District of Columbia since the May 1865 Grand Review of the Armies following the Civil War.

Democrats such as Washington Mayor Muriel Bowser and US Representatives Jason Crow (D-Colorado) and Steve Cohen (D-Tennessee) called for careful vetting of the troops to ensure that no potential anti-Biden ‘terrorists’ were in the ranks. Bowser also asked that crew-served machine guns be included in the National Guard’s arsenal, but outgoing Homeland Security official Ken Cuccinelli denied the request, saying such weapons have no place in securing a civilian event.

“What are they afraid of?” one observer asked on Twitter. “Nobody’s there. F****g drama queens.”

But some saw the use of body armor not as overly cautious or political posturing but as evidence of the severity of the threat. It’s “an incredible reminder that, as federal investigators say, congressmen and congresswomen could have been killed two weeks ago,” Orlando television reporter Deanna Allbrittin said.

The threat was deemed legitimate enough that members of Congress have reportedly been allowed to buy body armor at taxpayer expense.

But ironically, some Democrats have taken steps to block American citizens from buying such protection for themselves. For instance, Senate Majority Leader Chuck Schumer (D-New York) pushed legislation in 2019 to regulate who could buy bulletproof vests and other body armor. A New York state bill introduced this month by a Democrat assemblyman calls for banning new purchases and forcing residents to turn over their existing body armor to police. It’s already illegal to wear body armor during the commission of a felony with a firearm, so the new legislation would only affect legal use of such equipment, including owning a bulletproof vest for personal protection.

Fear of Trump supporters isn’t limited to Democrats. Washington Post reporter Philip Rucker said Representative Peter Meijer (R-Michigan), one of the Republicans who voted to impeach Trump for allegedly inciting the riot, has decided to buy body armor “because his life is in danger.”