Home / WORLD / What’s the point in a Green Party? Eco activists are more focused on causing chaos on the streets with XR than elections & voting

What’s the point in a Green Party? Eco activists are more focused on causing chaos on the streets with XR than elections & voting 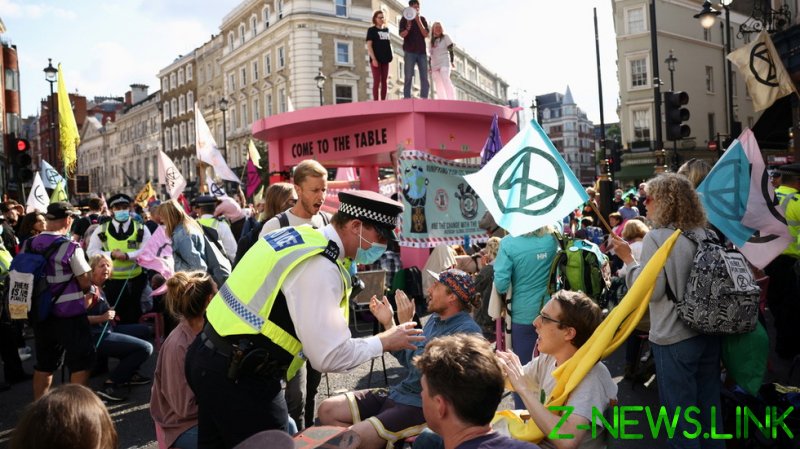 Watching day one of Extinction Rebellion’s planned two-week protest kick off with the promised mayhem on the streets of London on the same day that the woolly jumper brigade who prop up the more conservative political outfit began their search for new leadership, it was hard not to wonder, what’s the point of the Green Party?

After all, they are no longer the firebrands who brought eco protests to the masses and, as for their policies, anything useful they dreamt up has either been co-opted by the mainstream parties long ago or is now part of Greta Thunberg’s schtick. Polar bears, wind energy, shutting down coal mines, eating veggies, all this is now just so ho-hummably normal.

In the UK, desperate for any issue to stay relevant, the Greens are tearing theselves apart over their stand on transgender issues so that even their most committed activists must be asking, “What’s that got to do with recycling?”

As they depart the political stage, the largely anonymous joint leaders admit that no one outside of political geekery has the foggiest who is in charge of the Greens but to me that has a lot to do with their insistence on electing two leaders simultaneously, just like they do in countries like Germany. I never understood the purpose of that. It’s not as if they have so much to do that job sharing is an imperative or that a spare is needed, à la the Royal Family, in case one dies in office, or, heaven forbid, is assassinated.

Alongside the impression given that neither one is good enough to be left in sole charge, the effect is that any public attention is diluted 50:50 as egos invariably battle for the spotlight. To suggest that some sort of greater good comes into play and that a joint leadership strategy is workable, I’m sorry, smells like the sort of guff we put in our kitchen waste bins.

It’s all so worthy. So needy. So out of date.

Because the climate change activists, the neo-environmentalists, these days want a bit more action. They want to trash high-end stores in well-to-do neighbourhoods, they want to splash paint around the offices of global banks and polluting energy giants, they want to glue themselves to one another and shout nonsense at the police. They crave attention.

And that works. Their acting up is covered by the evening news. There are photos of them being dragged along the road by the police, they’re pictured in the costumes they must spend hours putting together waving around their ironic/abusive/incomprehensible placards online and in the very same newspapers they accuse of lying about the need for climate action.

There’s no talk of campaigning in elections or writing manifestos or even voting. It’s far more direct.

Much better than sitting in a church hall, sipping herbal tea, eating flapjacks and watching a slideshow about saving frogs in the Amazon rainforest. Climate protest these days is exciting, it’s rebellious, it’s dangerous and it’s a load of fun if you’re that-way inclined.

Everything the Greens are not. So unless they can inject some of this enthusiasm into their way of doing things then just like the doomed species of fish, insects, reptiles and mammals they seek to rescue, they too are destined for extinction.

And sadly, no one will miss them.