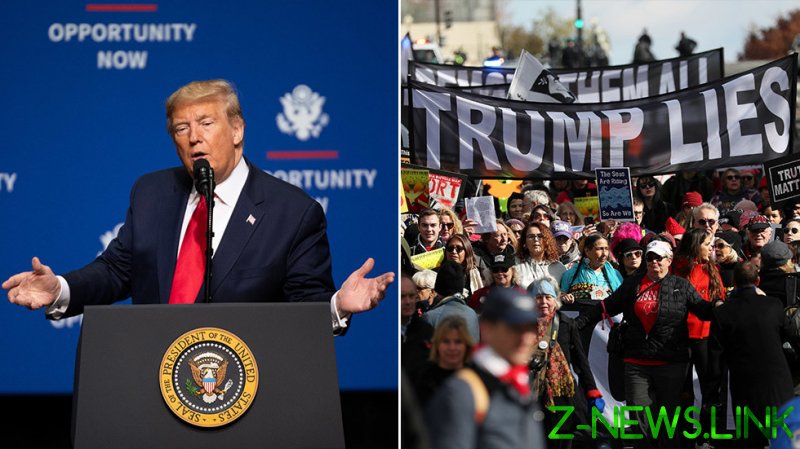 University of Florida students were asked to comment on some of the proposals in Trump’s officially released second-term agenda, in a new video released by Campus Reform, a conservative news site focused on higher education. The catch was that the interviewer introduced those plans as his democratic presidential rival Joe Biden’s.

“It’s a great idea,” said one of the students about Trump’s stated goal to “stop endless wars” and bring American troops “back home.” Others shared the disapproval of US foreign interventions, which Joe Biden has notably supported over the past twenty years as a US senator and then as the vice president.

The students were then asked about the Democratic candidate’s supposed plan to “dismantle human trafficking networks.” Unsurprisingly the respondents were “pretty anti-human trafficking” and agreed that it was a “great idea.”

When it came to the question about the need to fight terrorism, the majority once again agreed, saying that it “should be every president’s objective.”

In the end, those students, who weren’t already “ridin’ with Biden” said that the discussed policy proposals made them “lean more toward Biden” in the upcoming election.

All of them seemed surprised when it was eventually revealed that they were agreeing with the current president. “It surprised me a little bit because I don’t have the highest opinion of the president at the time…” a student said. “…But I think that’s great,” she added. Another respondent dug deeper into her potential political misconceptions, and said that it could be “hard” to judge Trump fairly, since the media keeps “bashing” him, whatever he does.

“I think everyone, including myself, could be a little bit more looking at the policies of the president rather than their character,” she concluded.

Though Biden and Trump are often perceived to be ideological opposites, they appear to completely agree on the ideas discussed in the interviews. The Democrat says he too will end the ‘forever wars’, oppose human trafficking and terrorism.

There is something to be said, however, about the perceived double standard, by which Biden and Trump may seem to be judged on similar ideas.

Back in July the former vice president unveiled a much-lauded $700 billion-plus ‘Buy American’ initiative, designed to support US manufacturers. A similar campaign proposal by Trump in 2016, on the other hand, was often called overly nationalistic and was even framed as ‘racist’.