Home / WORLD / ‘What we did was clumsy,’ Biden tells Macron during first meeting after AUKUS submarine deal row

‘What we did was clumsy,’ Biden tells Macron during first meeting after AUKUS submarine deal row 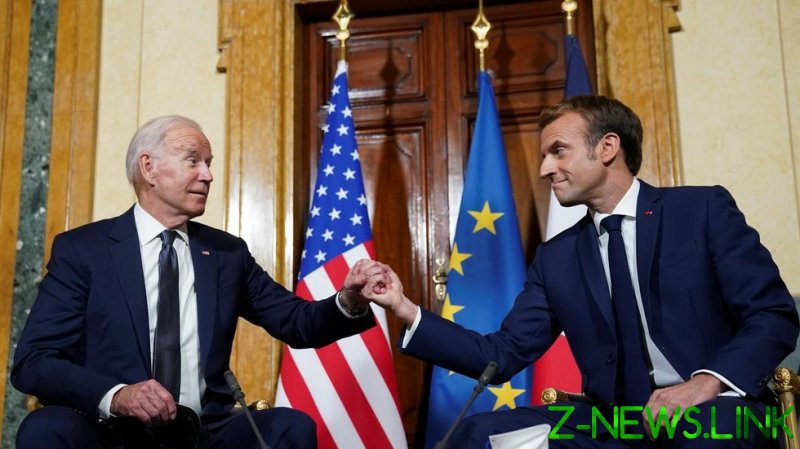 “What we did was clumsy, it was not done with a lot of grace,” Biden said on Friday.

“I want to make it clear, France is an extremely, extremely valued partner,” he added. France is a power in its own right, and “we have the same value system.”

“For me, it’s the future we need to look at,” the French president responded.

The remarks came as Macron hosted Biden at the French embassy to the Vatican. Both presidents are in Rome for the G20 summit.

Biden told Macron that he was under the impression France had been informed in advance – presumably by Australia – that its contract with Canberra for a dozen conventionally powered submarines had been canceled long before he made the announcement of the AUKUS atomic sub program on September 15.

Paris greeted the announcement with shock, as no one bothered to inform the French government of either the cancelation of the submarine contract – or the plan by the three English-speaking countries to give Australia a nuclear-powered underseas fleet.

The French foreign minister called the announcement a “stab in the back.” Macron reacted by canceling a gala in honor of a French naval victory that helped the US win its war of independence from Britain, and recalling his ambassador from Washington. It did not improve things when British PM Boris Johnson told the French to “Prenez un grip about all this and donnez-moi un break.”

Tensions only began to recede a week later, after Biden phoned Macron to apologize, admit that the US should have consulted France beforehand, and agree to “a stronger and more capable European defense, that contributes positively to transatlantic and global security and is complementary to NATO.”