Home / WORLD / ‘What was he trying to do to him?!’ Fans mock Sevilla star as Messi gives him runaround in 2-0 win for Barca (VIDEO) 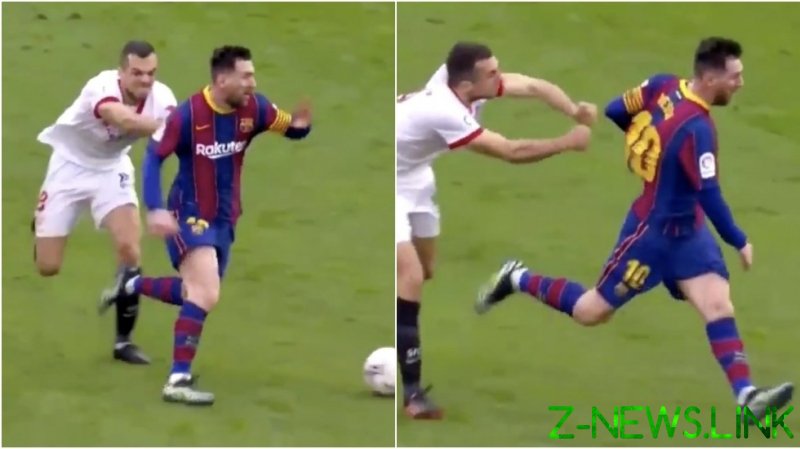 Messi scored one and created another for Ousmane Dembele as they narrowed the gap at the summit of the table to Diego Simeone’s Atletico – who retain two games in hand over the Catalan giants.

Messi slid Dembele in to open the scoring just before the half hour after United States international Sergino Dest struck the post with an earlier effort.

Both teams would go on to have goals ruled out for offside before Messi completed the scoring with five minutes remaining after the Argentine ace was initially denied by Sevilla ‘keeper Yassine Bounou.

The iconic magician was central to much of Barcelona’s positive actions on the pitch – and caused fits for the Sevilla rearguard tasked with limiting his influence, as shown by one incident when Sevilla’s Joan Jordan unsuccessfully tried to ‘rugby tackle’ Messi at one point.

“Bruh, seriously, WTF was he trying to do to Messi?” joked one fan.

The defeat for Sevilla erases a run of 10 straight wins for Julen Lopetegui’s team but they will have an opportunity for revenge on Wednesday when they again face Barcelona in the second leg of the Copa del Rey semi-final.

Sevilla were successful in the first encounter, claiming a 2-0 win of their own.