Home / business / What Samara diocese is fighting with a pig farm

What Samara diocese is fighting with a pig farm 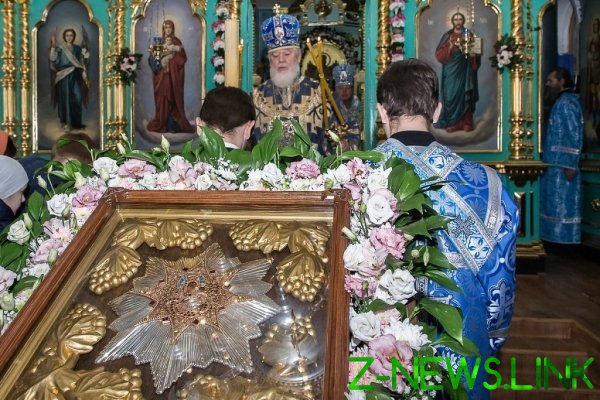 In the Samara region continue to monitor the scandal in the village Tashla, where neighbors pig farm and is known far beyond the region of the Holy source. Some social activists argue that the owner of the pig farm did not take out the waste and there’s burning the carcasses of dead animals than defile the Christian Shrine and puts at risk the health of the Ministers and parishioners of the local Church. Others believe information about environmental violations obviously exaggerated due to the lack of claims from regulatory authorities, and do not exclude that the persecution campaign of the farmer can be ordered in Samara diocese, which have long eyed the territory of its economy. Details – in the material “FederalPress”.

According to legend, a spring in the village of Tashla, Stavropol district, Samara region scored in 1917 on the site where one of the rural women found the image of the mother of God “Isbasically from harm”. Since then pilgrims from all over Russia and foreign countries travel to the City to bathe in the sacred spring and to worship the miraculous icon which is still kept built here in Holy Trinity Church. Tourists, parishioners and superiors of the temple confuses the mere smell of sewage – the legacy of the Soviet past: since 1920-ies about three hundred meters from the source is pig-breeding complex. 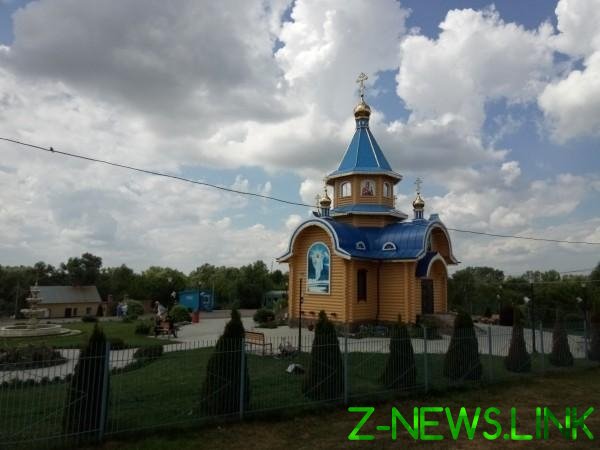 In July of this year, the pig farm visited, social activists and local journalists, after which in social networks has conducted an active discussion almost a century-old neighborhood.

As told “FederalPress” has been in the City a reporter Elena Tatarintseva, in her opinion, the owners of the farm ignore the norms of environmental safety: “Beyond the barn is a dump where from-under floors farm drain wastes of pigs and absorbed in the ground. Employees of the complex said that waste is disposed of outside the buildings. In fact, as I have found, anywhere they are not taken out and blend in there, and then fall into underground water, polluting the sacred source”

Locals say that the odor at the source has always been, and the waste is not exported properly from the Soviet era. In addition, according to the servants of the Holy Trinity, ibid., from the pigsty, periodically burn the corpses of animals, why in the district is characteristic odor. “Last time, they said, it happened the day before our visit. And the smell hung in the air,” said Elena Tatarintseva.

The proximity of the pig-breeding complex is most inconvenienced by it members of the clergy. Other farms with cowsheds and pigsties removed from the sacred site. The clergy, headed by the Archpriest of the Church have repeatedly appealed to the authorities and requested that the owner of the farm has rectified the situation.

“Pig farm appeared at the source for a long time and, I believe, not accidental, – said the press Secretary of the Samara diocese, priest Maxim Kokarev. – People wanted to keep out of the Shrine. Sadly, this is partially happening now”

“This neighborhood seems extremely unfavorable. Especially considering how the flow of people, including from other parts of the country and abroad, attracts this place, – continues Maxim Kokarev. – Tashlinskogo source is one of the iconic places of the region, we can say that the face region. And even in this sense, we were wrong to shame before visitors. It would be highly desirable to solve the issue with the transfer of the farm away”.

“At the same time we understand that we are in a legal state. If the farm has the rightful owner, the first thing in his power to influence the outcome of events. I hope that the owners will pay attention to the rising wave of protests and will meet the population. I wish the sides came to the decision that will satisfy everyone, he hoped the press Secretary of Samara diocese. But if this does not happen, you should look to how your farm complies with the law. Of course, the pig never smells as sweet. But, sure, if everything was done according to the prescribed standards, problems would not arise”.

See also:  Map ATO in the Donbass not cease fighting

The sanctity of someone else’s well

Currently, the Network appeared several petitions of social activists, addressed to the Russian President and the Patriarch of all Russia. To seek justice to the end called Orthodox Archpriest Vsevolod Chaplin. He harshly criticized the owners of the pigsty and advised concerned citizens to beat all the bells.

Meanwhile in social networks has deployed a real information war between opponents and defenders of the livestock sector. The first demand to move the pig away from the source and bring the owner to justice, and the second accusing the first in lobbying for the commercial interests of third parties.

The owners of foul-smelling structures, the journalists with the words of the priests named Sergei and Vladimir Guzewich, the last of which is a Deputy of the regional Duma. The MP said “FederalPress”, the reason to comment on this situation he as no business in the City.

“The fact that the owners are brothers Ducey, – lies. A farm owned by the businessman from Tolyatti Andrey Rudakov. I doubt that the MP Vladimir Guzev even here ever been” – said “FederalPress” the head of administration of rural settlement Musorka, which includes Tashla, Victor..

“This is the story of a dispute between two business entities, – said Victor.. – Samara diocese of long talks with the owner of the pig farm for the transfer of her land to the property. But the talks have stalled, and some time after this began Polanyi articles in the media. Were detractors who try fraudulently to induce the owner to abandon the area and transfer it free to the jurisdiction of the diocese”. “Formally, the diocese can only talk about the redemption of the land at the contract price, as in his time the land was purchased by the current owners swiniary”, – said the head of administration of rural settlement.

According to system SPARK, Andrew Rudakov issued a peasant (farmer) economy (KFH) in March 2014. During this time, according to Victor Vechkanova, the area was repeatedly the staff of the environmental Prosecutor’s office, Rospotrebnadzor, sanitary-and-epidemiologic supervision and other departments. “Revealed only minor, non-critical violations. In General, the owners of the complex are economic activities correctly and accurately, they have registered each pig, all animal tests are taken”, – he assured.

As confirmed by “FederalPress” in the Samara Interdistrict nature protection Prosecutor’s office, the supervisors last time I explored the site this spring, and then summer its review conducted by the Department of veterinary science of the Samara region. Of violations of no information. In the regional Department of Rosprirodnadzor also said that KFH in Tashla is not in the register of objects of a negative impact on the environment.

To receive the comment of Andrew Rudakova “FederalPress” has failed.

“The fact that groundwater allegedly contaminated the source, is also true, – adds Victor.. – Few people know that some of the water is taken from the farmer Rudakova”.

“You know you have to discredit part of the myth of the Holy spring, but the situation is this: the spring is there, but the water was not enough. The nearest water source is on the site Rudakova. From his wells last water in the Holy spring. Per month the entrepreneur take 42 cubic meters of water passing through the pipes and does not come into contact with waste pig farms. That is, the owner of a pig farm not only did not hinder the clergy, but also provides parishioners and water”, – said Victor and.. 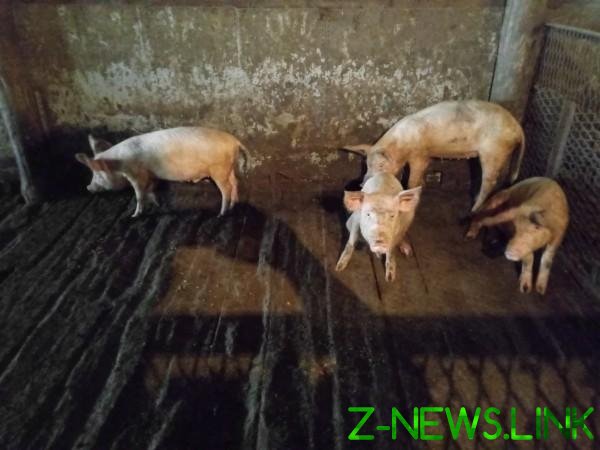 Meanwhile, as the Chairman of the International socio-ecological Union Sergey Simak, the lack of data on violations by supervisors does not eliminate the problem: “Pig farms are polluting industries, around which is mounted sanitary-protective zone (SSZ), and they should be equipped with sewage treatment facilities and devices for decontamination of manure. Avian and swine manure – the most venomous, so store fresh manure outside of buildings is prohibited. However, a grief-businessmen often tend to gain maximum profit with minimum investment, saving on equipment. The result is always the same”.

“I can’t say how contaminated the groundwater, but the source is exactly located in the area of the smell from the pig farm and flies are flying out the truth, adds the ecologist. – Geographically, the source is included in the GCC farm, which, according to Regulations for pig farms, is determined by the radius of a kilometer. GCC installed but not for sources, and for objects of housing and social facilities, as well as for especially protected natural territories. And then, not at all, there are standards. For example, there are no standards for odors, only on the content of chemical substances. Therefore, the regulatory authorities can quite honestly say that their part is no crime, pinching his nose with a hand. The same goes for flies. The manure may be stockpiled on site, and flies are flying beyond it. And a formal violation is not”

Member of the regional headquarters of the popular front, coordinator of the project “Environment and forest” in the Samara region Valery Badger confirms that the problem of failure to remove waste and reigning in this connection the insanitary conditions in the livestock industry happen all the time everywhere. “Unfortunately, the owners of such enterprises usually do not comply with environmental regulations. Hoping to reduce its own costs entrepreneurs do not kill the waste of dead animals, do not take out the animal remains on the grounds. Local residents turn to officials, but do not find support neither in law enforcement nor the Executive authorities,” – says the expert.

Finding itself near the source of the pig farm is not terrible, said the activist. The pig and the source co-existed about a hundred years, and complaints were few, as the environmental safety in Soviet times, at least in part respected. “Today the authorities are first and foremost paying attention to the food program, and many entrepreneurs use it, – the public man. – Businessmen believe that once they do, well supplied with meat, the province, the violation is excusable. But they have to understand that a number of them are people.”

The best out of the situation, according to Valery Badger, would be a transfer of pig. But this requires additional funds, which the entrepreneur may not have. As there are none at district. “That’s why owners need to pay attention to the rules, follow the removal and reclamation of wastes, especially of dead animals, because the farm cannot and should not coexist with the cemetery. We also know that the Ministry of agriculture actively distributes grants and provides businessmen with financial support from the state. You can use it to build a modern pig farm in a remote location, comply with all environmental standards. But it all depends on the will of the owners of the farm”, – the expert concludes