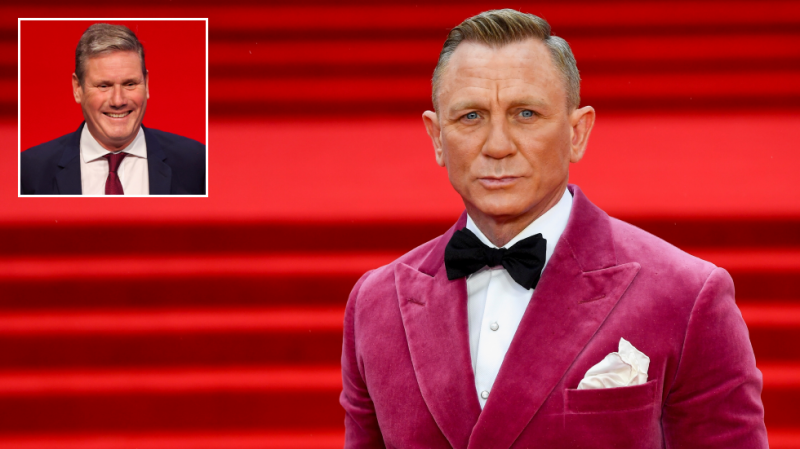 Speaking to ITV News on Thursday, Starmer said he thought it was time to mix up the 007 franchise. “I don’t have a favourite Bond, but I think it’s time for a female Bond,” the Labour leader told ITV.

Starmer had been asked if he had a favourite James Bond, with the presenter referring to the many actors who have played the iconic role.

The question has been bandied around a lot in recent days after the premiere on Tuesday of the latest Bond film, ‘No Time to Die’ – the last in which the famous super-spy is played by Daniel Craig.

It’s fair to say, however, that Starmer’s suggestion that Craig’s replacement should be a woman has not gone down well.

The Labour leader was branded “uber woke” by GB News host Dan Wootton, who shared his thoughts on Twitter, noting that the ITV presenters hadn’t even asked a question about Bond’s gender. Wootton suggested that such an answer would make it hard for Labour to win back the Red Wall – the former northern stronghold of Labour voters.

Others also focused on the Labour leader’s apparent wokeness and questioned whether this was really the right strategy to get the party back into power. One person said that if they were in Starmer’s shoes they would have been more prepared to answer the question with a ready-to-go speech on the best Bond.

Columnist Paul Embery pointed out the obvious, noting the character’s name is James and would have to change if he were suddenly female. “It would be an entirely different character. Like saying there should be a male Wonder Woman,” he wrote.

Conversative commentator Darren Grimes also weighed in, asking if anyone else was “swiftly coming to the conclusion that Labour don’t know their arse from their elbow?” and citing both Starmer’s demand for a female Bond and his recent comment that it’s not only women who have cervixes.

Others got more personal, with one saying that while Starmer might like a female Bond, she’d like the leader of Labour to be “empathetic, intelligent and not given to wistful bouts of fantasy,” but “we can’t all get what we want.”

Starmer wasn’t completely alone in wanting to see a gender swap, though. Pippa Crerar, the political editor at The Mirror, said she didn’t have a favourite Labour leader, “but I do think it’s time for a female Labour leader.”

The general disapproval of Starmer’s comments was seemingly reinforced by Twitter polls on the matter.

Almost no one backed the Labour leader’s plea for a female Bond, though one person complained that his remarks had awoken “every cretinous transphobe, right wing culture warrior and raving misogynist” on Twitter.

Starmer’s remarks come after a week of controversy for Britain’s Labour Party. During the party conference in Brighton, Starmer rebuked a colleague who claimed only women have cervixes, delegates were told “too many white men” were putting their hands up, and shadow chancellor Angela Rayner called Tories “scum.”