Home / WORLD / What Kayleigh did next: What will Donald Trump’s press secretary do after his presidency goes not so gently into that good night?

What Kayleigh did next: What will Donald Trump’s press secretary do after his presidency goes not so gently into that good night? 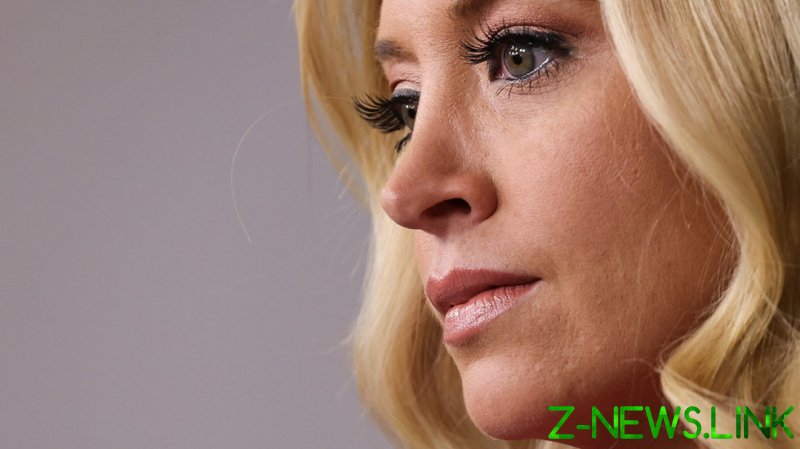 It’s not the most flattering photo. But it’s real. In a frame taken from a White House press briefing the day after rioters stormed the Capitol, the main spokeswoman for The Trump Show looked washed out and the worse for wear.

Poor Kayleigh McEnany. The standard-issue Barbie-doll hair and makeup was gone and she was just a young woman standing all alone on a stage in front of the whole world.

Is this not the worst job in the world right now, being the frontwoman during the writhing and agonising death throes of the Trump era? Poor Kayleigh looked like she’d been crying.

The screen grab pinged its way around Twitter, Facebook, and Instagram feeds, along with a witty caption saying the White House hair and makeup team must have quit, joining the exodus of more senior, but far less important, Trump staffers.

There are many people now longing for the day when state-level police knock on Trump’s door and take him away to face any number of charges when his immunity as president expires. Can you imagine what The Donald will look like after a couple of weeks in jail? He’s a 74-year-old, incredibly vain man. Blond hair dye and tangerine-toned perma-tan are probably hard to come by in Attica Correctional Facility in upstate New York. It’s probably easier to score marijuana and crack cocaine.

Trump’s fourth press secretary only landed her role in April, just as the pandemic really began to rage. Now she’s wilting under the glare of the most intense scrutiny anywhere on planet Earth, under the most scrutinised presidency there has even been. Even grizzled old hacks such as Sean Hannity of Fox News or Lesley Stahl of ‘60 Minutes’ would struggle right now. And the truth is that Kayleigh – like so many in the Trump administration, including the president himself – was probably never really up to the job in the first place.

Now, plenty of people view her boss as an American Adolf Hitler – even President-elect Joe Biden compared occasional Trump supporter Ted Cruz to Joseph Goebbels. Ted Cruz has a thick skin, and I doubt he will be deterred from taking another run at the Republican presidential nomination. It may well be that very few people in the Trump White House even know who Goebbels was. (FYI, he was Hitler’s propaganda minister.)

Unfortunately, Kayleigh McEnany is also in charge of Trump propaganda – or communications, depending on your taste. And, like Goebbels, it seems, she will remain loyal to the end. Though Goebbels and his wife Magda took loyalty to the ultimate extreme by killing their six children and then themselves.

Don’t worry about it, Kayleigh – you’ve only got a week left.

That said, there is already a sinister campaign for a witch hunt against anyone linked to the Trump administration, with claims there will be ‘consequences’ for all those who worked for the president. Although the link now seems to have expired, there was even a website for the Trump Accountability Project, which stated, “Never forget those who further the Trump agenda.”

Whatever the Democrats’ public words about ‘healing’, it’s apparent they are as empty as any uttered by lothario Trump when he promised a girlfriend that he wouldn’t bed other women.

When the curtain finally falls on The Trump Show, you can be damn sure of two things. First off, some of these people around that Cabinet table will make a run for the Republican nomination sooner or later. And, secondly, there will be a veritable snowstorm of words on paper, and book after book after book is sure to be written.

They’ll end up fighting each other to see who can get their boring, self-serving tome out first. The Trump presidency will be the most written-about in history. It will spawn books that could only ever be enjoyed by political journalists and political nerds with a perverse addiction to the minutiae of American politics..

What will Kayleigh do next? Her options could be narrow.

Randall Lane, the editor of Forbes magazine, warned companies not to hire McEnany or any other Trump defender. “Forbes will assume that everything your company or firm talks about is a lie … We’re going to scrutinize, double-check, investigate with the same skepticism we’d approach a Trump tweet.”

The truth is she’d only really wanted to be on TV, and hadn’t started out as an ardent Trump fan. She’d been working on Fox News, but just couldn’t get a break in front of the cameras until a friend told the blonde Harvard graduate that Trump was going to be the Republican nominee and, if she wanted “to get on television and have a career as a political pundit, you would be wise to be an early backer”.

Those quick to shoot her down on social media, put yourself in poor Kayleigh’s expensive shoes. She hasn’t actually done anything wrong, other than try to do her job. And she isn’t a politician – she never had any political power. Give the girl a break.

Oh, and Kayleigh… get your book out first!