Home / Society / What is really left after Stalin

What is really left after Stalin 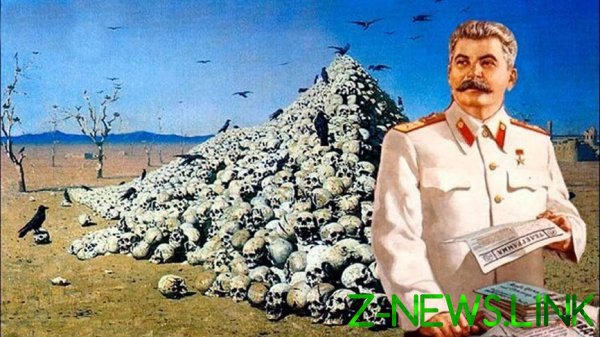 Today is a very auspicious day — the day of death of the executioner of the peoples of Stalin, who is personally involved in the genocides and wars of the XX century and the tragedy of the Russian people — when the surviving executioners’re trying to trample the memory of the victims. However, many Russians continue to paradoxically glorify Stalin, considering it is almost the greatest genius of the twentieth century.

Stalin took Russia to the plow and left with the atomic bomb! proudly and aggressively like to say the fans of the USSR from time to time. This quote allegedly attributed to Churchill, although in fact sir Winston Leonard such nonsense did not say (Soviet sources refer to a non-existent speech) and could not say — from a logical point of view the phrase is a oxymoron, like the phrase “went Out into the yard to gather apples, and looked blue”.

The presence or absence of the atomic bomb in any positive manner does not affect agriculture, even more of it in minus all the money spent on the bomb, on tractors nothing left. In General, the common people atomic bomb did not affect, in the ordinary village people as plowed with the plow in 1917, and continued to plow in 1953 — with only one difference that the plow is now harnessed a cow or a goat because the horses in the Soviet collective farms was considered “excessive private property,” and was banned for private ownership.

In today’s post we will look at the photos of the Russian town of Krasnoslobodsk, made in 1952, just a year before the death of the great agriculturist and improver , and is supplied, that is to say, the result of his rule. The pictures made the brilliant photographer George starlings, and say that they really are amazing — it does not say anything. Looks like some of the paintings of the Wanderers, showing the “dark life of Imperial Russia” in the first half of the XIX century, but in fact it is the photos taken in 1952, in the second half of XX-th century.

So, under the cut is a truthful and shocking pictures from the life of Russian province in the beginning of 1950 years. Make sure you check out the article below, write in the comments your opinion, well to friends to add do not forget) And telegram channel also subscribe.

First, a little history and General information. As I wrote above, all of these pictures were taken by a brilliant photographer George starlings was born in the village Starodevichy in the Republic of Mordovia. As far as I know — in the Soviet Union these photographs never exhibited and I even think that if they were found at the time, George, then immediately banned for “denigration of the socialist way of life”.

All the photos submitted to the small town of Krasnoslobodsk (the name on the Moksha language — Osh), which is located in the Republic of Mordovia and became a city in 1706, and from 20 December 1934 to December 25, 1993, the city was part of the Mordovian Autonomous Soviet Socialist Republic. In the fifties the population was about 7,000 people, had two public squares, and on the outskirts of the city was a river Moksha.

In principle, the city is not so deep heartland — Krasnoslobodsk is relatively close to Ryazan, Nizhny Novgorod and Penza.

Now let’s look at the photo.

02. 1952, the river Moksha. People live in some old houses, covered with wood chips and constructed explicitly in pre-revolutionary years. “Stalinist plenty”, which is so fond of telling fans of the USSR, to the Krasnoslobodsk clearly not sunk. 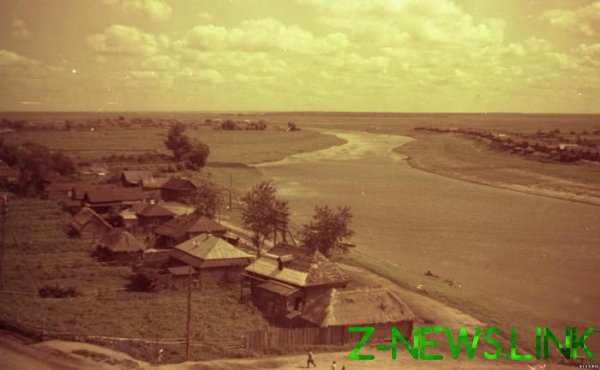 03. Buildings in the Central part of the city. Note the bridge it’s wooden and clearly built too long ago. A stone building on the hill — completely built before the revolution, nothing new has been built. But Stalin had 18 houses, each of which looked approximately so. 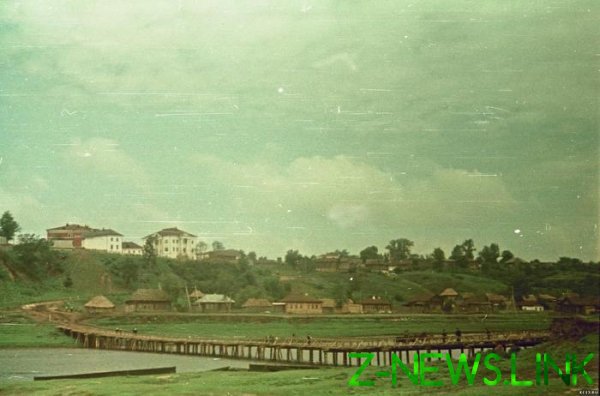 03. Panorama of the Central part of the city. You see something built by Soviet power? Maybe there’s at least a couple of ten-stalinok, in which every Soviet family absolutely for free give a five-room apartment? Where is it? 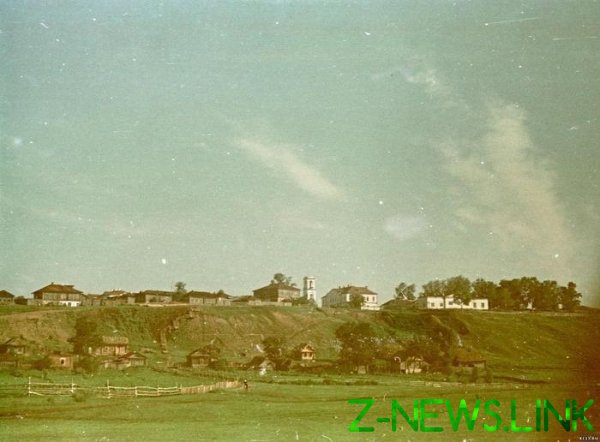 04. Personally, I see a picture of the “old life”, about “winning over” which the Soviet ideologists cheerfully reported back in the 1930-ies. Supposedly, the old life is gone, now living in new ways. 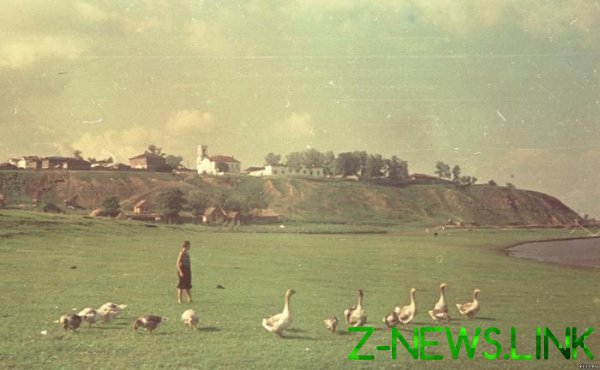 05. Entertainment people soccer on the Cathedral square. In Krasnoslobodsk was not even a normal stadium. And also pay attention to how people are dressed, the boys are forced to continue wearing the shirt and pants of his older brothers and run basically barefoot. 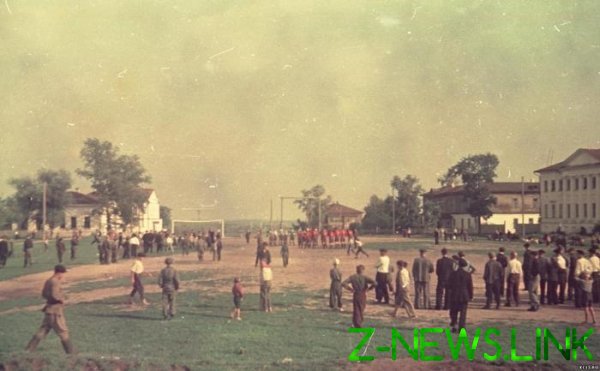 06. My favorite series of photos, market. Just as 100-200 years ago, the inhabitants bring to the market products of its own manufacture of pottery ware, clamps, wooden barrels, etc. the delivery Method of the same — on carts, covered with straw. 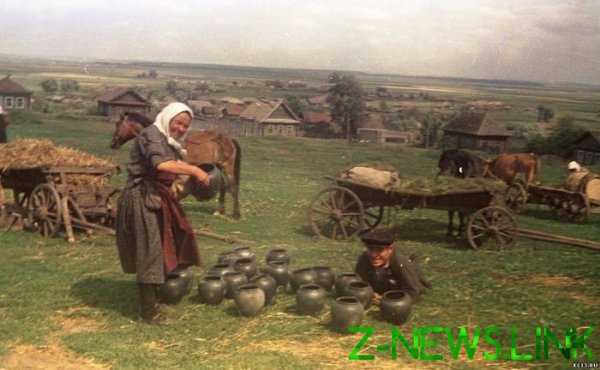 07. Panorama of the market. For decades the Soviet power here has not changed anything. 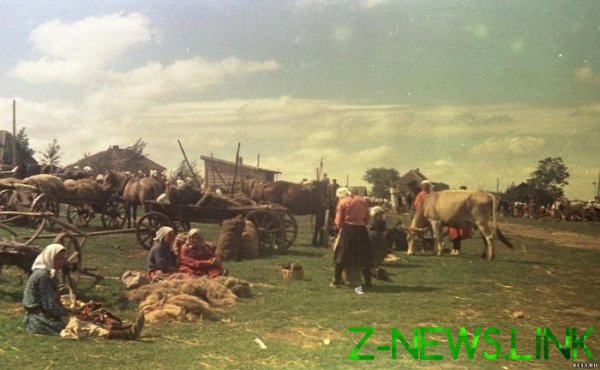 08. Probably the most stunning picture. It seems that this is not 1952, and the nineteenth or even the eighteenth century, traders came to the market in the people’s homemade dresses and SANDALS. In response, Carl! This suggests that people, first, no money for a normal modern clothes, and secondly — in the vicinity there is no infrastructure, no Shoe stores, no nothing. Only in the XIX century to buy a piece of cloth and sew their own clothes by spinning the pedal of the sewing machine. 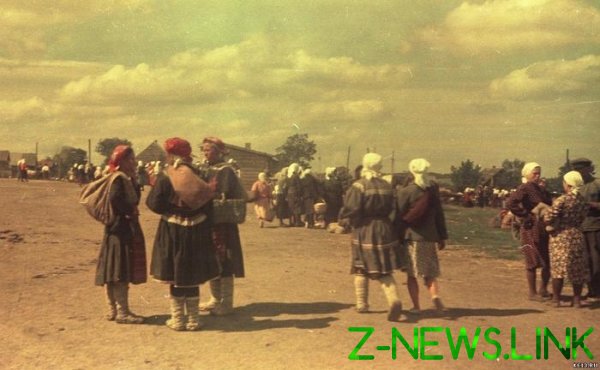 09. More traders, also in sandals. Interestingly, someone said that they are better off, because the USSR now has the atomic bomb? 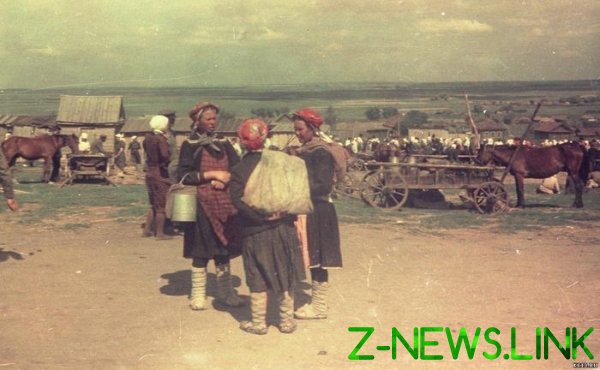 10. The market trade. People have no weights, no kettlebells, nothing — apparently, the product is sold by the piece or by eye. The trade is conducted directly from the baskets or from some ancient kitchen tables, fitted under the shelves… 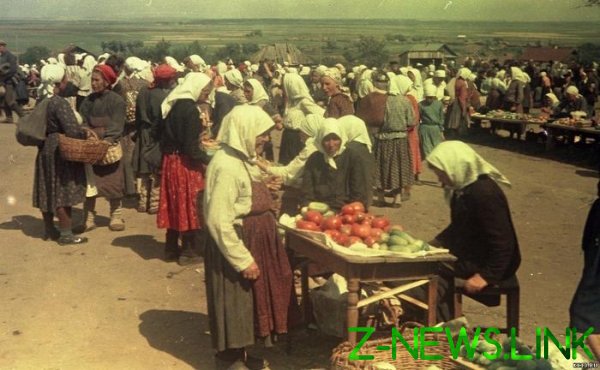 11. And here is a photo, apparently taken in the Central part of the market — there is something inconvenient like low shelves, knocked together from rough-hewn planks (probably since Imperial mills) is an ancient primitive scales on tripods. 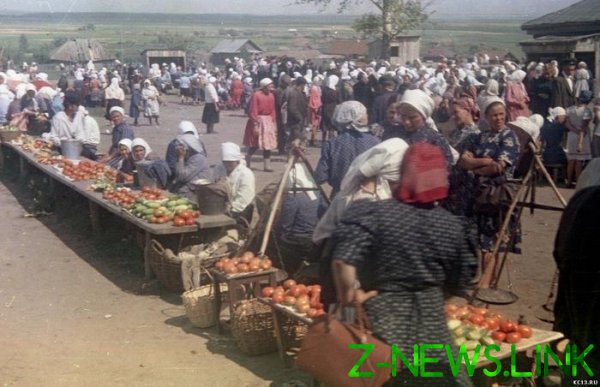 12. General view of the trade. Identify immediately, what is the age? 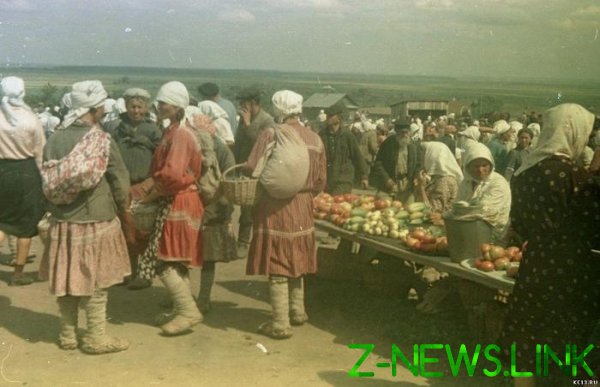 13. And this trade of manufactured goods. No homehow selling “the highest quality and made according to the Standards of the” Soviet production in the area is clearly there — people are forced to make baskets, barrels, washtubs, washing boards and sell them on the market. 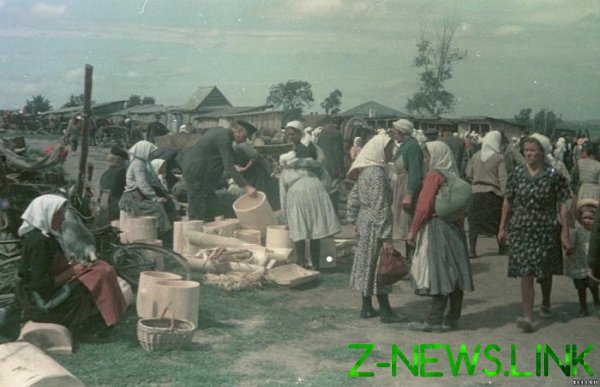 14. Only a decade after this famous photo shoot Skvortsova in Krasnoslobodsk, something began to change gradually. On the market there have been shopping arcade (photo 1961): 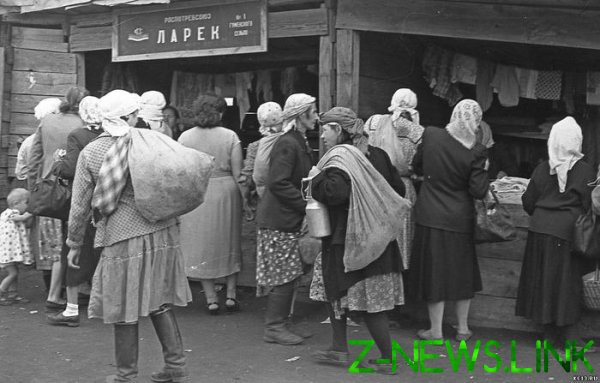 15. And people began to dress at least a little but better… 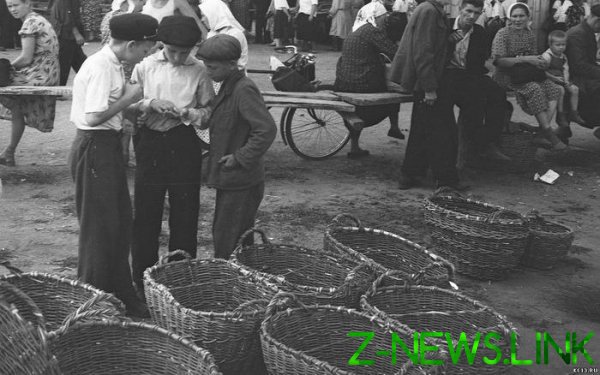 16… In the same 1952, which was pictures taken of George Skvortsova, in California hosted the first contest of “Miss universe”, the participants of which looked like this: 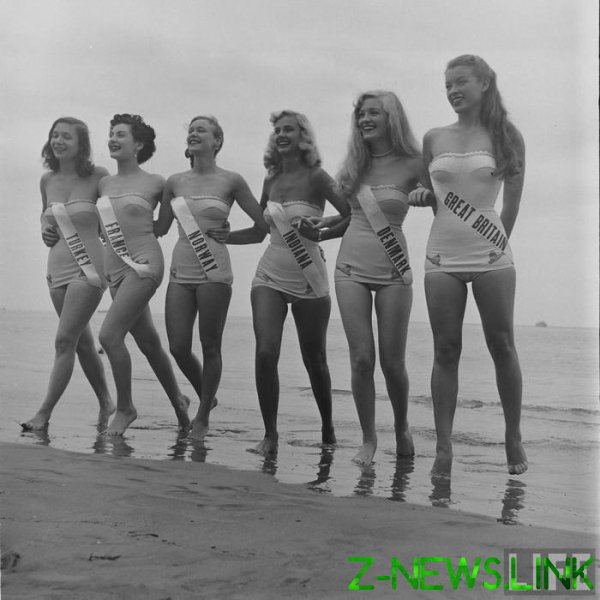