Home / WORLD / ‘What if Trump had said it?’ Joe Biden resurrects ‘exaggerated’ claim that he was shot at during trips to Iraq

‘What if Trump had said it?’ Joe Biden resurrects ‘exaggerated’ claim that he was shot at during trips to Iraq 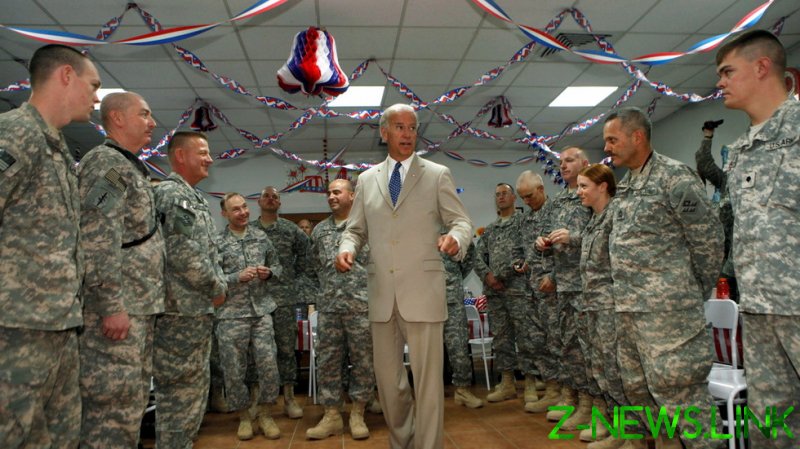 While addressing US State Department staff on Thursday, Biden hailed the diplomats for showing “great personal courage,” which the new US president has purportedly seen first-hand.

“I’ve been with some of you when we’ve been shot at,” he told the audience.

It’s unclear what Biden meant by the passing remark, and the White House has not elaborated on the statement.

Biden has spoken about shooting-related close calls before, but he later walked back the claim. During a Democratic presidential debate in 2007, the then-senator alleged that he had been “shot at” while inside Baghdad’s fortified Green Zone.

When later pressed by journalists to expand on the story, Biden acknowledged that it would have been more accurate to say that he was “near where a shot [had] landed.”

“No one got up and ran from the room – it wasn’t that kind of thing,” he said at the time, adding: “It’s not like I had someone holding a gun to my head.”

Biden’s team issued a clarifying statement at the time, saying that the 2005 incident involved mortars that were fired “a few hundred yards away” and subsequently shook the building where Biden was staying. His staff also claimed that also in 2005, a bullet narrowly missed the helicopter that was transporting Biden and his aides to Baghdad’s airport.

The Democrat’s political opponents used the controversial claim as ammunition. The late senator John McCain (R-Arizona), who was seeking the Republican presidential nomination at the time, put out a statement from a retired Black Hawk helicopter pilot that accused Biden of blatant exaggeration.

More than ten years have passed since then, but Biden doesn’t seem to be facing the same scrutiny. Conservative pundit and author Liz Wheeler accused media outlets of giving Biden a free pass, arguing that broadcasters would “go ballistic” if Donald Trump had made a similar claim.

Greg Kelly, a military veteran and Newsmax host, posted a video of Biden making the remark, adding, “STOLEN VALOR” – a term some military service members and veterans use to describe people who lie about aspects of their military service record or pretend to have served in order to garner unearned respect.

Others equated the questionable utterance to some Democrats’ dramatic retellings of the Capitol riot on January 6.

OAN journalist Jack Posobiec mused that perhaps Biden was trying to upstage Rep. Alexandria Ocasio-Cortez (D-New York), who has been criticized for claiming that she was almost killed in the unrest, even though she was not in the Capitol building during the violence.

It seemed that few were willing to offer a defense for Biden’s inaccurate comment, although outlets that did run stories about it, such as Fox, were accused of partisan nit-picking.