Home / WORLD / ‘What did you have for breakfast, Joe?’ As CNN publishes ‘tough’ questions for Biden, critics guess how low the bar will REALLY be

‘What did you have for breakfast, Joe?’ As CNN publishes ‘tough’ questions for Biden, critics guess how low the bar will REALLY be 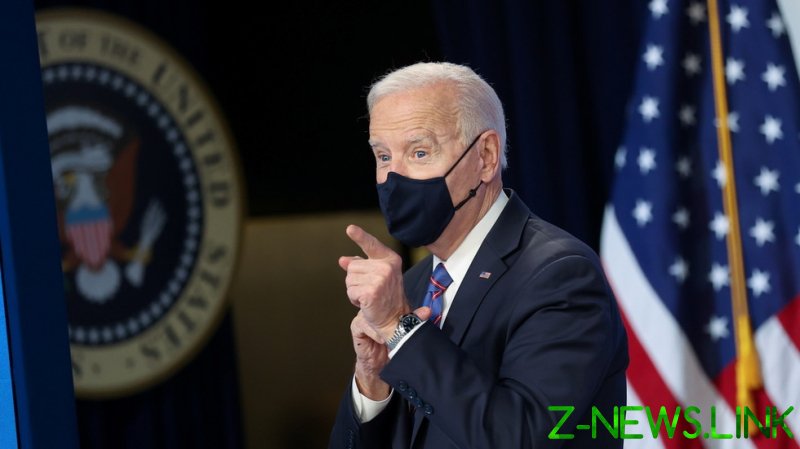 President Joe Biden is holding his first solo press conference later on Thursday afternoon. Both Donald Trump and Barack Obama had held multiple conferences by this point in their presidencies, but Biden has kept the media waiting an unprecedented nine weeks. Only Calvin ‘Silent Cal’ Coolidge made reporters wait longer, when he took office nearly 100 years ago.

There is much to talk about. Biden has signed more than 50 executive orders, put his pen to a $1.9 trillion stimulus bill, and launched missiles at Syria. Tens of thousands of illegal immigrants have poured over the Mexican border since Biden shredded Trump’s strict immigration policies, and both Biden and Vice President Kamala Harris have mounted a push for gun control in the wake of two mass shootings.

The press has plenty to work with, but this is Joe Biden we’re talking about. His inauguration was treated by many commentators in the mainstream media as a kind of spiritual moment, in which Biden metaphorically extended his arms to “embrace America,” to quote CNN political director David Chalian. “Let the healing begin,” tweeted his equally rapturous colleague, Shimon Procupecz.

Though CNN’s reporters no longer speak of Biden in messianic terms, the network published a list of potential questions for Biden on Thursday, and to call them “softballs” would be an understatement.

The list inspired mockery on Twitter, as commenters guessed just how low the bar would be set.

On Covid-19, CNN wants to know “how ambitious will you get?” and “how can we convince people to take the vaccines?” Note that both of these questions set Biden up to answer as he sees fit, as does the question “how will you make the vaccine distribution more equal?” Biden could be hammered on discrepancies between states and communities in vaccine distribution, but this method avoids placing the president under any undue stress.

Fresh from vaccines, CNN wants to know whether Biden will ban gasoline vehicles and “back electric cars.” At a time when Biden’s executive orders have already axed the Keystone XL oil pipeline and banned new drilling contracts on federal land, the energy workers who’ve lost their jobs (1,000 already and up to a million by 2022, per some worst-case scenario statistics from the industry) surely want to know when Biden will deal their industry another haymaker.

CNN also devoted a number of questions to former President Donald Trump. The network wants to know whether Biden will regulate Trump’s proposed social media platform, whether he thinks Trump incited his followers to commit “sedition” on Capitol Hill in January, and whether “presidents and their top advisers should be given special protection from congressional and other investigations after they leave office.” Every single one of these questions sets Biden up to bash his predecessor, as does the open-ended “how did this border situation happen?” Biden has already blamed the unprecedented migration surge on Trump, and will likely do so again if given a chance like this.

CNN also wants to know not if, but when Biden will expand and pack the Supreme Court, and when his party will move to end the filibuster, a Congressional rule standing between them and issuing progressive edicts with a simple majority vote. Conservatives oppose both of these measures, and Biden himself only recently came out in support of the latter. But CNN, understood here as an advocacy group for progressive liberalism, has already decided that they must happen, and Biden must be the man to do it.

Barring a question on whether Biden is spending too much money – having proposed a $3 trillion infrastructure, climate and “equality” bill, another on minimum wage, and another on why he hasn’t appointed more Asian-Americans to cabinet positions – CNN’s questions are extremely friendly, and a doddle for Dear Leader to answer how he sees fit.

CNN wonders when Biden will “increase taxes on wealthy Americans and corporations?” It could ask instead why Biden has already cut in half the income threshold over which Americans will start to see tax increases, but that might look too much like journalism and too little like PR.

Of course, if CNN were a serious news outlet, its reporters could ask Biden any number of tough questions. Why, for example, did his administration promise transparency but impose a media blackout on migrant detention facilities at the border? Why did Biden overturn every single one of Trump’s immigration policies, including the ‘Remain in Mexico’ policy that – politics aside – prevented surges like the present one from happening?

They could call Biden out for lying about how the US “didn’t have” a vaccine when he came into office, despite having personally received one a month earlier. They could point out how Vice President Harris sought to assure gun owners that the government isn’t “coming after your guns,” despite both Harris and Biden promising to do just that.

CNN is not alone in treating the Biden administration with kid gloves. From Newsweek articles on his adventures playing Mariokart with his family to MSNBC’s commentators literally comparing him to Jesus Christ, Biden has gotten a far easier ride from the media than his predecessor.

Thursday’s press conference is “open to pre-credentialed media,” meaning Biden’s aides have already chosen whom to allow in. That doesn’t rule out tough questions, but does make them far less likely.

At least we might finally learn the president’s favorite flavor of milkshake.