Home / WORLD / ‘What a knockout’: Sensation Pimblett hailed for ‘one of the all-time great UFC debuts’ as Khabib baiter sinks stunning KO (VIDEO)

‘What a knockout’: Sensation Pimblett hailed for ‘one of the all-time great UFC debuts’ as Khabib baiter sinks stunning KO (VIDEO) 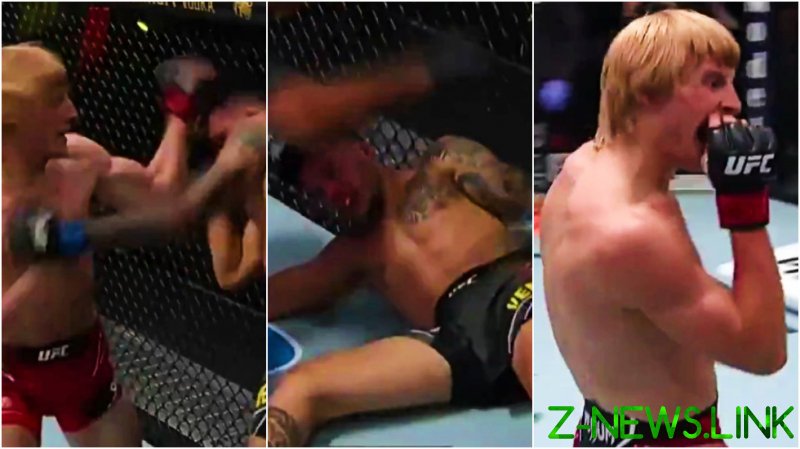 Liverpudlian Pimblett had generated plenty of talk ahead of his much-anticipated bow for the promotion, not least after labeling ex-champion Nurmagomedov the ‘Karen of MMA’ just months after he had been embroiled in a blazing row over comments he made towards Georgian fighters.

If the 26-year-old had any critics of his performances inside the cage, the rising MMA star known for his brutal finishes silenced them with a first-round demolition of Luigi Vendramini at the UFC Apex.

Having been caught clean on the chin at least once by Vendramini’s left hooks, Pimblett landed with an explosive right hand, raining in a flurry of blows as his stunned opponent backtracked before being put down and out with another right.

That earned provocative Pimblett a $50,000 Performance of the Night bonus and enhanced his status as one to watch inside and outside of the octagon.

“What did I tell you?” Pimblett asked afterwards. “I’m a scouser. We don’t get knocked out.

“One of the all-time great UFC debuts,” he gushed, echoing Pimblett’s desire to see ‘The Baddy’ scrap in the UK. “Such a shame it wasn’t in front of fans in a sold-out arena.

“His next fight needs to be in England, hopefully in Liverpool. Would be absolute scenes.”

Pimblett was not the only Scouser in action at the Apex. Flyweight Molly McCann-Pearson won for the first time in almost two years with a unanimous decision victory over Ji Yeon Kim.

“My city, my people my heart,” the 31-year-old declared after celebrating with Pimblett.

“I owe it all to this place. Liverpool, that was for you.”