Home / WORLD / ‘What a disgrace’: US Attorney General ripped for calling Covid-19 shutdowns ‘greatest intrusion of civil liberties’ since slavery

‘What a disgrace’: US Attorney General ripped for calling Covid-19 shutdowns ‘greatest intrusion of civil liberties’ since slavery 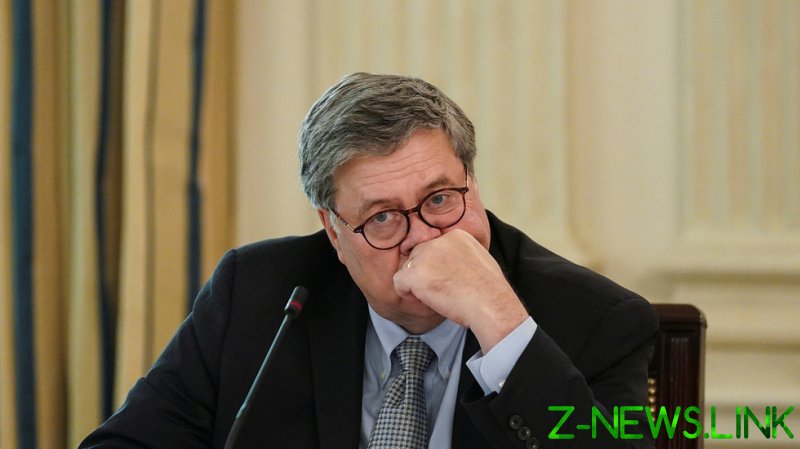 Barr’s comments came while speaking at a Constitution Day event held in DC by Hillsdale College. Asked about coronavirus restrictions “forbidding a church from meeting” in many areas, the attorney general compared lockdowns to “house arrest.”

“Other than slavery, which was a different kind of restraint, this is the greatest intrusion on civil liberties in American history,” Barr said.

Once his comments were shared more widely, few found legitimacy in the comparison.

“Bill Barr equates quarantine with chattel slavery as one of the greatest intrusions of civil liberties in American history. Statements like these make you realize many in this country know nothing about what it truly means to be oppressed,” ‘The View’ co-host Sunny Hostin tweeted in reaction to the comment. Another person criticized the remarks by simply saying, “What a disgrace.”

“The thing about Bill Barr’s comments is that he knows better. Which is what makes them a whole lot worse,” CNN political correspondent Abby D. Pillip added.

Barr’s comments also angered lockdown supporters, but he earned a round of applause at the DC event after making them.

Some conservatives, many of whom have been critical of local governments’ response to the pandemic, also showed support for Barr amidst a pushback against his coronavirus comments and other actions as attorney general.

Since there was never any national lockdown in place, but rather various stay-at-home orders and business shutdown mandates – which still continue in certain areas in most states – Barr chided governors for acting like “bureaucrats” and treating “free citizens as babies that can’t take responsibility for themselves and others.”

Barr argued that people, especially business owners, should have been given the opportunity to remain working and issued “rules” to follow, such as the current mask mandates in place in a variety of states.