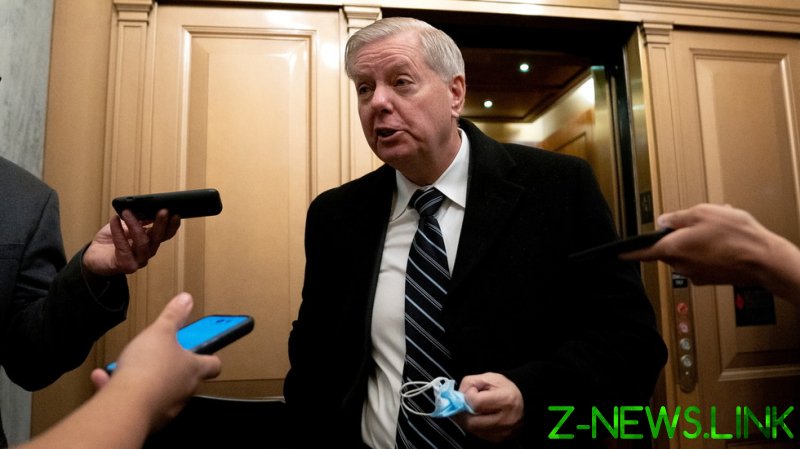 Appearing on ‘Fox News Sunday,’ Graham railed against the impeachment trial in the Senate, which ultimately failed, with the 53-47 vote not enough to reach a  ‘guilty’ ruling. He called it an “affront to the law” and “unconstitutional.”

Despite its failure, however, the Trump-supporting Republican says Democrats have “opened Pandora’s Box” and leaders like Harris could pay the price.

“We’ve opened Pandora’s Box to future presidents. And if you use this model, I don’t know how Kamala Harris doesn’t get impeached if the Republicans take over the House,” he said.

Harris was brought up multiple times during the impeachment trial for her past promotion of a bail fund for Black Lives Matter protesters that released rioters who ended up rearrested on separate criminal charges.

Graham’s apparent threat to Harris, mixed with his own disapproval of the standard used to try and convict Trump for “inciting an insurrection,” have many blasting the senator for hypocrisy, with many also rushing to Harris’ defense.

“Well it only works if the impeachee is a Democrat, a woman or Black (in VP Harris’ case she meets all three of Jim Crow Caucus chairman @LindseyGrahamSC’s criteria,” MSNBC’s Joy Reid tweeted in response to a user asking how impeaching Harris could be possible.

Others even suggested Republicans taking control of Congress could mean a chance to overturn election results in 2024.

“Graham is correct about the stakes of the 2022 midterms: If Republicans take Congress, they could not only impeach Biden and/or Harris (though unlikely they’d have the votes to convict), they could potentially succeed in overturning the results of the 2024 election,” former Barack Obama speechwriter Jon Favreau suggested.

Graham also revealed to Fox News that he’d spoken to Trump since the trial ended and suggested the former president will be actively involved in the Republican Party going forward.

“I spoke to him last night; he was grateful to his lawyers. He appreciated the help that all of us provided. You know, he’s ready to move on and rebuild the Republican Party,” he said, adding the former president is “excited” for the 2022 midterm elections.

Trump’s influence over the Republican Party has been a hotly-debated topic, especially in light of seven Republican senators voting to impeach on Saturday, and Sen. Mitch McConnell (R-Kentucky) seemingly turning on his past support and giving a speech on the Senate floor saying Trump was “responsible” for the January 6 riot at the US Capitol – despite voting against impeachment – and suggesting he could be pursued in criminal court.

Graham said McConnell’s speech could come back to haunt Republicans.

“I think Senator McConnell’s speech, he got a load off his chest, obviously, but unfortunately he put a load on the back of Republicans,” he said. “That speech you will see in 2022 campaigns.”