Home / WORLD / ‘We’ve been waiting a lifetime’: Ex-Finland star says ‘pressure is on Russia’ as he talks national pride ahead of Euro 2020 clash

‘We’ve been waiting a lifetime’: Ex-Finland star says ‘pressure is on Russia’ as he talks national pride ahead of Euro 2020 clash 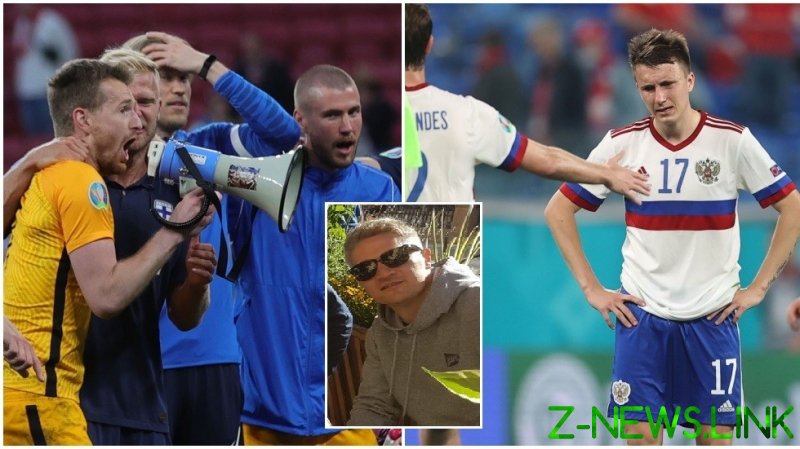 Making a maiden appearance at a major tournament finals, Finland have already surprised many by beating Denmark 1-0 in their opening game in Copenhagen on Saturday.

Any joy at the result was tempered somewhat by the worrying scenes with Danish midfielder Christian Eriksen during that match, although fans will have found comfort from the news that the Inter Milan star is making progress with his recovery.

For Finland fans, their Euro odyssey next takes them from Copenhagen to St. Petersburg, where they play Russia at Krestovsky Stadium on Wednesday.

In contrast to the Finns, Russia go into the game under heavy pressure having been thoroughly outclassed by Belgium in a 3-0 defeat in their opening game on Saturday night.

A day before Russia and Finland meet, Suomi supporters were already soaking up the sunshine in the bars and cafes which line St. Petersburg’s many canals.

Among those taking in the atmosphere was former Finland international Roiha – a man who played 20 times for his country between 2001 and 2010, scoring four times.

Having played alongside the likes of the legendary Jari Litmanen as part of a generation who fell short in their efforts to steer the Finns to a showpiece tournament, Roiha knows just how much Euro 2020 means to fans from his homeland. 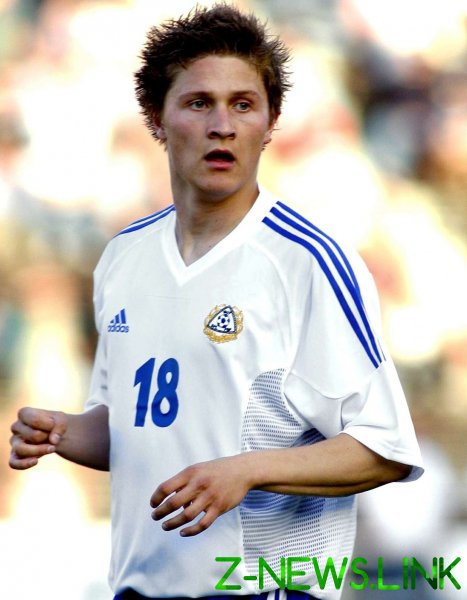 Roiha pictured in action for Finland during his playing days. © Action Images

“Football is maybe not as big a thing as in other countries, but for many people it is a big thing, and many people have waited their whole lives for this to happen,” Roiha, 40, told RT Sport.

Much of Finland’s success in reaching Euro 2020 has been credited to the man in the dugout, Markku Kanerva.

Capped 59 times by the national team during a playing career in which he also worked as a school teacher, Kanerva initially joined the Finnish set-up as manager of the under-21s.

He then stepped up to the senior team as assistant coach and had spells as caretaker manager, before being handed the main job in 2016.

Since then, the 57-year-old has become a national hero for leading the Eagle-owls to Euro 2020 – a feat they achieved by finishing second behind Italy in their qualifying group. 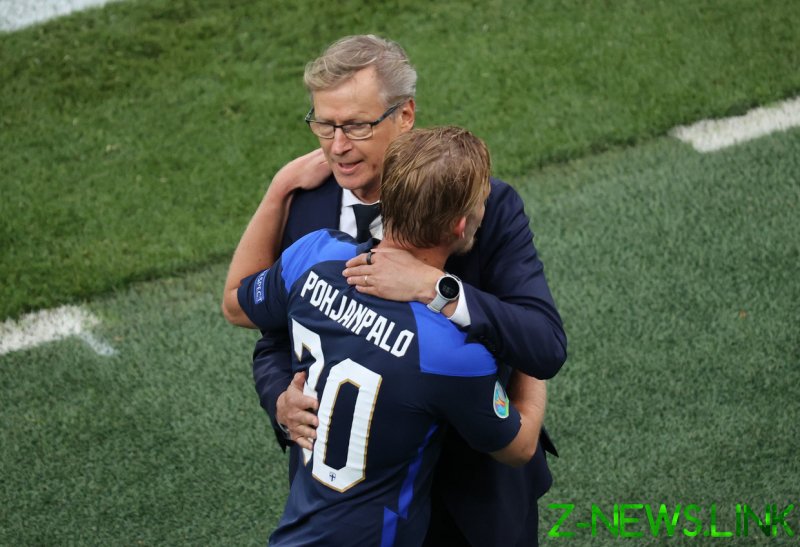 Kanerva has been a major factor in the Finn’s progress. © Reuters

Roiha said Kanerva deserved all the praise being heaped on him for his efforts.

“He is [a national hero] and he should be. He’s done a great job in bringing back the belief in Finnish football after a pretty dark period with no victories,” Roiha said.

“He wasn’t even seen as the first manager or choice, he was the caretaker. But actually he did such a good job that they couldn’t take anybody else.” 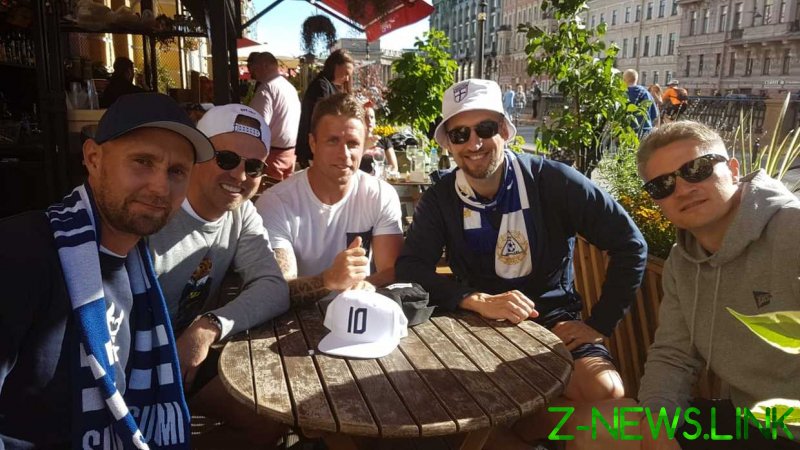 All of the grit, belief and organization that Kanerva has instilled in the team was on display in their opening win in Copenhagen, as Finland took the lead through a 60th-minute header from Joel Pohjanpalo before holding firm in the face of Danish pressure.

Denmark ended up with 70% possession and 22 shots to the visitors’ one, but still the Finns prevailed.

“He knows the players and has a realistic approach to what they can do and what they can’t do,” Roiha said of Kanerva’s strengths. 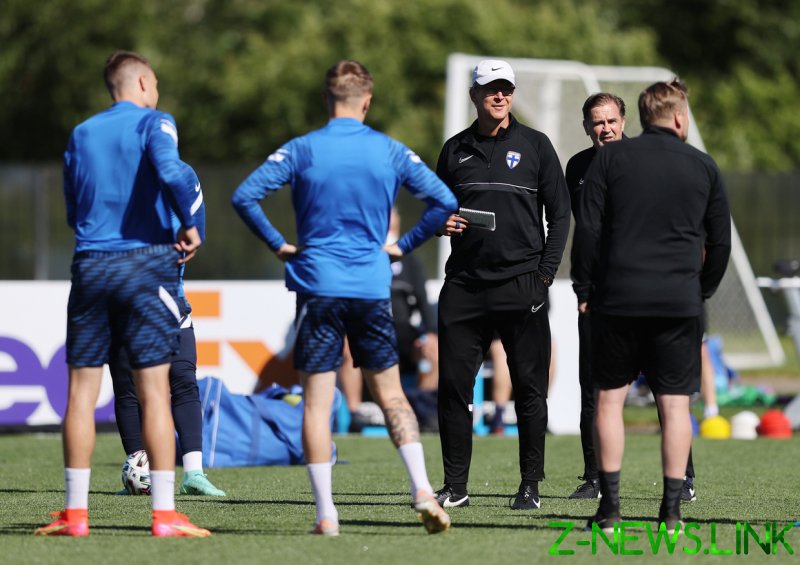 Kanerva is a hero in his homeland. © Reuters

Russia manager Stanislav Cherchesov will be the next man to pit his wits against Kanerva, and the ‘Sbornaya’ boss spoke in his press conference on Tuesday about Finland being a tough, well-drilled unit.

Although this time they will meet on the football pitch, in sporting terms the Russian-Finnish rivalry is often associated with their far more frequent encounters on the ice hockey rink.

Indeed, Wednesday’s meeting will be just the fifth time Russia and Finland have met in international football since Russian independence in 1991.

The larger of the two neighbors has won on all four of those previous occasions – one of which was a 3-0 World Cup qualifier in Moscow in 2008, a game in which Roiha featured as a substitute.

“It’s not the same as ice hockey where the teams meet each other practically every year.

“I don’t think the Russians see us as a big rivalry, they see us as a small neighboring country. There’s some rivalry, but not that much.” 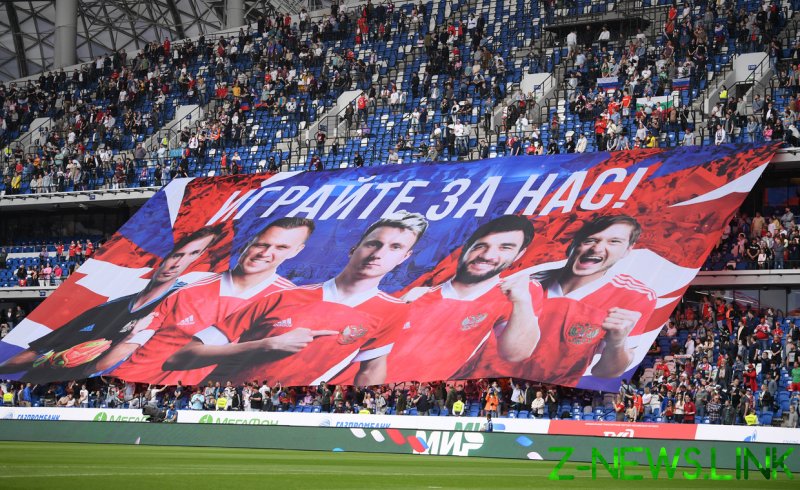 Russia fans will be out in force to support their team on Wednesday. © Sputnik

Russia’s defeat to Belgium means they head into Wednesday’s game with far less margin for error if they are to stand any hope of reaching the knockout stages at Euro 2020.

Even if the generous tournament format allows four of the best third-placed teams to qualify along with the top two from each of the six groups, Russia are in desperate need of a lifeline on Wednesday.

“Absolutely [the pressure is on Russia],” said Roiha. “They have to get a result. A draw would be nice for us, and actually we maybe don’t even need a result tomorrow.” 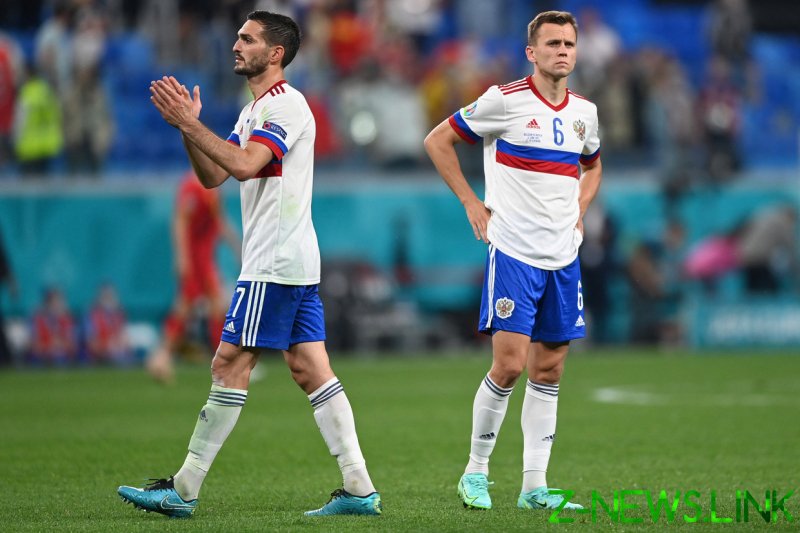 Russia were well beaten by Belgium in their Euro 2020 opener. © Reuters

Roiha and the group of four friends he was with in St. Petersburg pointed to Finland forward Teemu Pukki – a cult hero at English Premier League outfit Norwich – as an obvious key player for their team.

However, they added that goalkeeper Lukas Hradecky would be crucial if a Russian barrage is forthcoming. 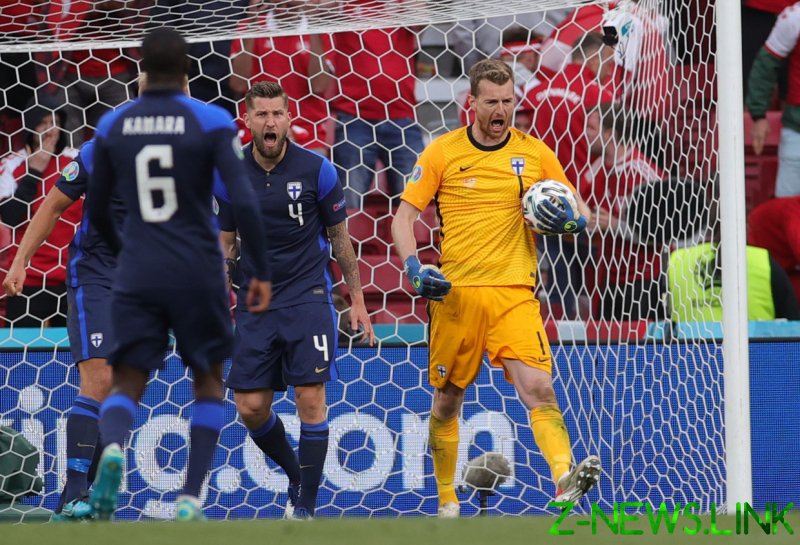 Hradecky saved a penalty in his country’s win against Denmark. © Reuters

“He’s not going to concede a single goal,” the group of friends said confidently.

As for the threat from the opposition, Roiha’s friends readily admitted that they were unfamiliar with most of the Russian team, who mainly play their football domestically.

Indeed, the likes of former Russian tennis queen Anna Kornikova were sporting names which came to mind far more readily, but they were vaguely familiar with Russian captain Artem Dzyuba. 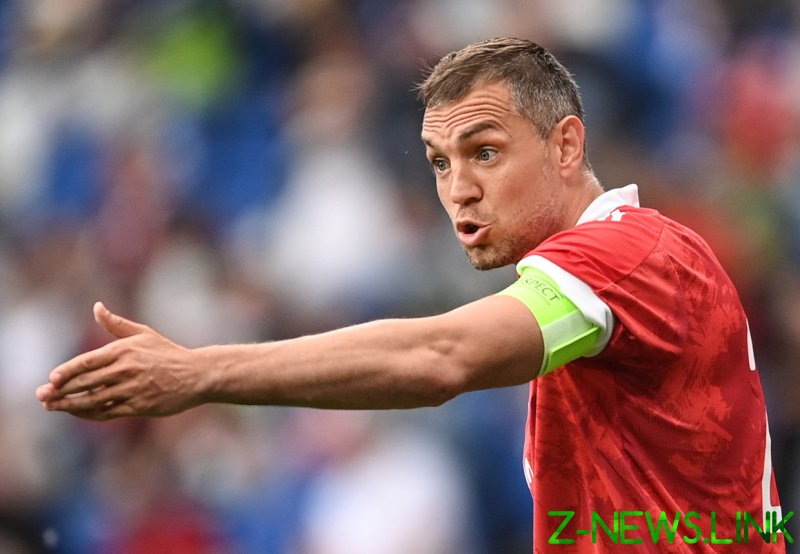 Dzyuba was one name familiar to the Finnish group. © Sputnik

Aside from their shock result against Denmark, Finland and their fans came away with credit for the solidarity they showed during the harrowing scenes with Eriksen.

Finnish supporters joined their Danish counterparts in chanting Eriksen’s name during the ordeal, while Suomi players were subdued in their goal celebrations after taking the lead – even if they did allow themselves to join the fans in celebrating afterwards.

By that time, though, the news had already filtered out that Eriksen was conscious and stable in hospital.

“Football is like a family, you know. Because that kind of thing happens and after that, everybody’s together. All what matters was Christian Eriksen,” said Henrik, a member of the group with Roiha in St. Petersburg. 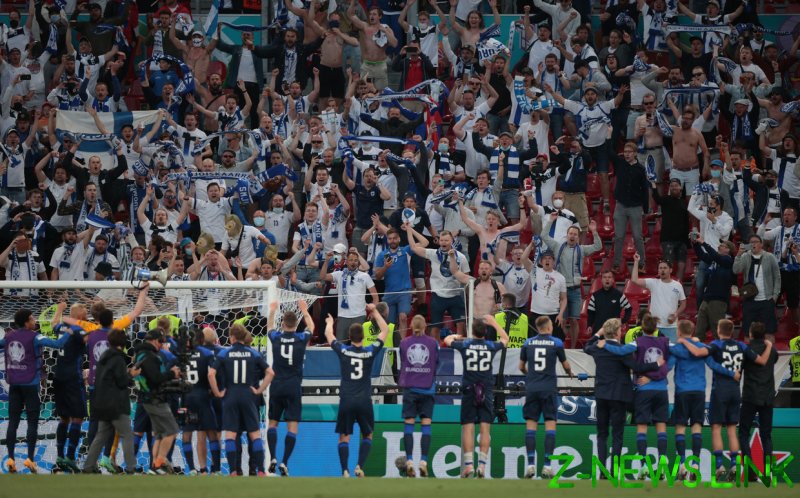 Finland’s Euro 2020 adventure has already been a memorable one – for reasons both positive and much less so – and their fans are looking forward to the next chapter being written in Russia on Wednesday.