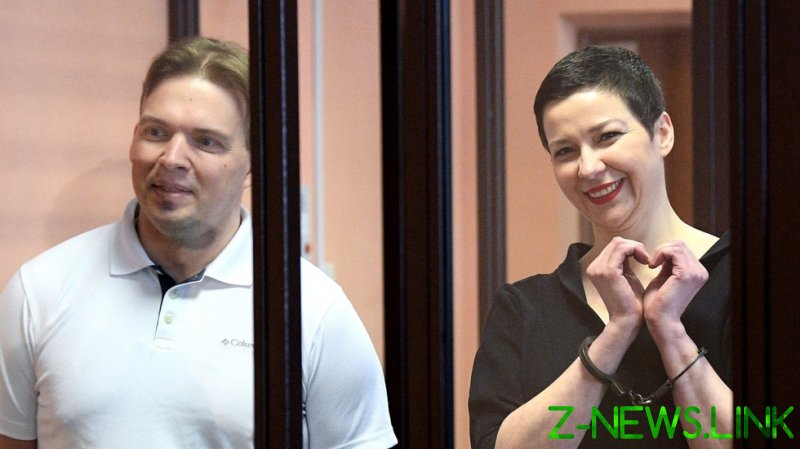 Kolesnikova, a highly trained musician as well as a political activist, is one of the three women who together challenged Lukashenko in last August’s election. She also helped lead calls for a new vote, after it took place amid opposition and international claims of fraud, sparking an undeniably brutal crackdown afterwards. Kolesnikova was the only one of the trio who remained in the country, the others having fled.

Znak is a lawyer who has worked with the opposition for many years. Both are members of the Coordination Council, set up by anti-Lukashenko factions in an effort to oust him.

The pair share common ground in that they have contributed to keeping the protests non-violent, despite the government’s recourse to political deportation and detention as well as widespread abuse. That much has been confirmed in a recent report by the UN Human Rights Council, which concluded that, in the face of peaceful demonstrations, “the authorities responded with unjustified, disproportionate, and often arbitrary force.”

During their trial, Kolesnikova and Znak were accused of endangering national security, conspiring with the aim of seizing power, and founding and leading an extremist organization. Both reject the accusations – their lawyers, who will appeal, maintain that the evidence presented by the prosecution is, in essence, void.

Despite the gravity of their alleged crimes, the trial was remarkably short, comprising 17 sessions over the course of a month. It was held in secret, and the revelation of the purported evidence, which fills 41 volumes, or any details of the proceedings, is prohibited. The advocates have said they cannot see any good reason for the secrecy.

This lack of transparency is not only extremely disturbing, but also means the authorities cannot complain that the public and other outside observers have no trust in the outcome of this trial and are compelled to come to their own conclusions.

In that respect, the picture is not complicated – virtually no one believes the rule of law is being respected. On the contrary, there is a broad consensus that the accused are completely innocent, the trial is a sham, and the sentences are nothing but political repression.

And, in this case, the majority is likely to be right. As with the West’s most famous – and badly abused – political prisoner, Julian Assange, the drive against Kolesnikova and Znak is legally baseless and morally abject. As London-based NGO Amnesty International has summed it up, “it is manifestly clear” that the accused have not committed “any recognizable crime.”

The truth is not in the middle, and there is no room for sitting on the fence on the issue: this Belarusian case, like the American-British assault on Assange, is a textbook example of political repression by means of a perverted judicial procedure. And it does not matter if you like or dislike the accused or their politics. Because that has nothing to do with the fact that their persecution is a grave injustice. No one deserves to be punished for what they have not done. Yes, period.

With that out of the way, let’s put this trial and its outcome in context. What can it, perhaps, tell us about the Belarusian situation more generally?

First of all, Lukashenko is not letting up. There is some speculation as to why his response to Kolesnikova, in particular, is so aggressive. The answer? Misogyny – the fact she resisted being booted out of the country and does not bend under pressure. That makes her different to Roman Protasevich who, since being arrested when his Ryanair flight was diverted by the Belarusian authorities to Minsk over the summer, has undergone a miraculous transformation, and apologized for his supposed misdeeds. In a despotic state, which Belarus is now, the narcissism and personal hang-ups of the ruler matter – a lot.

Incidentally, Lukashenko’s obstinacy also shows, once again, that sanctions usually do not work, even on their own terms. It may make Westerners feel good to impose them, and Svetlana Tikhanovskaya, the main symbol of the exiled Belarusian opposition, may be misguided enough to even ask for them, but all they really do is harm ordinary citizens and make governments dig in their heels.

Clearly, another reason for Lukashenko’s raging-bull attitude is that he has painted himself into a corner and may well have given up on ever again returning to his old tilting game between the EU and Russia. As was predictable even at the time of the initial post-election crack-down, his brutality has isolated him from the West and increased his dependency on Russia. The latter, having bigger fish to fry, in the face of an antagonizing and myopic West, keeps working with him for its own geopolitical reasons, as states do.

But no one in their right mind genuinely likes or respects Lukashenko – a notoriously unreliable and shifty, as well as extremely selfish, operator. Even by autocratic standards he sticks out as a particularly unattractive prospect for partnership. Those who still pretend they like him will be the first to abandon him when his time finally comes. In short, here’s a man who has miscalculated, missed his exit, and is now lashing out in any way he can, from grounding planes and coercive “migration diplomacy,” to hammering anyone he can seize at home and, quite possibly, even abroad. No wonder thousands, if not tens of thousands, of Belarusians are fleeing.

Lukashenko, now 66 years old, won’t last long as “Europe’s last dictator.” Viktor Orban in Hungary has a good chance of taking the title because he’s been savvy enough to build his authoritarianism inside a complacent EU that forgot to establish a proper expulsion mechanism. Always remember post-Cold War European-dictator rule number one: first, enter the EU, then seize power at home. Never the other way around.

The sentences for Kolesnikova and Znak are representative of Lukashenko’s signature style now. More than 35,000 Belarusians, in a small country of not quite 9.5 million inhabitants, have reportedly been detained just for exercising their right to assemble. There are hundreds of prosecutions of “human rights defenders and lawyers, journalists, and medical staff simply for doing their job,” while the perpetrators of state violence, including severe physical abuse, enjoy impunity, according to the UN Human Rights Commission’s rapporteur on Belarus. More than two dozen journalists are in detention, over 50 NGO’s have been shut down (or are about to be).

Yet being in a corner does not necessarily mean your end is nigh. Western observers, especially, should be careful not to be unrealistic once again – Lukashenko has been counted out before by all too many. Indeed, underestimating his brute resilience and capacity to survive by relying on violence and repression has been one of the key mistakes of both commentators and the Belarusian opposition, as even Tikhanovskaya has since acknowledged.

We do not, in other words, live in a “color-revolution”/”civil-society” utopia where people who look and talk as if they’d fit right in with the progressive middle-class Berlin Prenzlauer Berg crowd, for instance, necessarily prevail.

Moscow, meanwhile, seems to be forging ahead with its long-standing policy of integration with Belarus, while Lukashenko keeps blowing hot and cold in a transparent attempt to have it both ways: receive the Russian support he desperately needs but pretend he is still an independent actor. It is beyond unlikely that anyone on the other side of the table will fall for this ploy.

Two takeaway points are particularly important. First, it is probable that it will be Kolesnikova, and not Tikhanovskaya, who will play a leading role in post-Lukashenko Belarus. Her credibility, given that she remained in the country rather than touring the world calling for sanctions, is greater. No, the Belarusian opposition will not talk about this, because unity – or its appearance – are a resource. But it’s clear anyhow. And it may be a good thing, too.

Second, Western observers and politicians should finally learn to keep the questions of Belarus’ domestic order and its international orientation as separate as possible. Belarusians need a better, more participatory, and reasonable government. They do not need to become card-carrying members of the EU, objects of NATO’s geopolitical strategies or even of liberal-missionary “value” spreading. And no, the two things – democracy and Westernization – are not one and the same. Indeed, mixing them up is likely to make the struggle for more democracy in Belarus even harder.