Western pundits believed post-Maidan Ukraine would serve as an ‘example’ for Russia – in reality, it’s become a cautionary tale 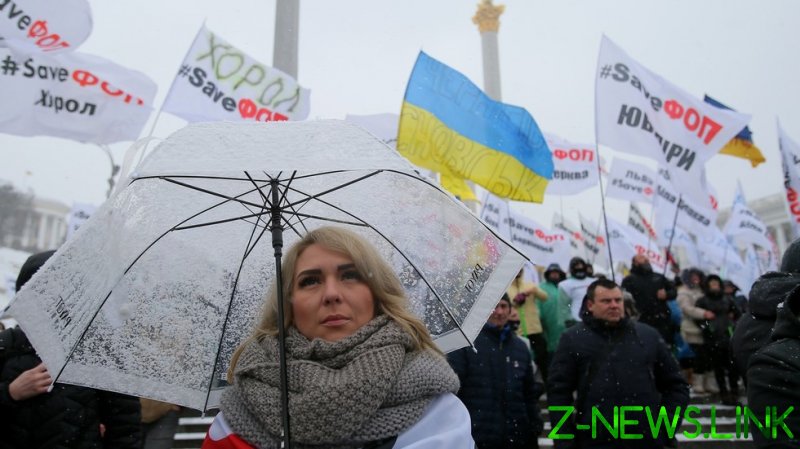 In May 2014, newly elected Ukrainian President Petro Poroshenko promised that he would rapidly bring peace to his country. “The anti-terrorist operation cannot and should not last two or three months. It should and will last hours,” he said.

Nearly 60,000 hours later, the war into which the badly named “anti-terrorist operation” morphed is still going on. Poroshenko’s successor Volodymyr Zelensky similarly promised to bring the fighting to an end. “My main goal… is that I want to end the war. This is my mission within these five years,” he told journalists. But he has been equally unsuccessful.

Zelensky resoundingly defeated Poroshenko in the 2020 presidential election, in which the incumbent won a plurality of votes only in the far west of the country. By portraying himself as a candidate not only of peace, but also of national unity, Zelensky was able to attract the votes of a large number of Russian-speaking Ukrainians in the south and east of the country who had been alienated by Poroshenko’s increasingly nationalistic tone.

Unfortunately, since then Zelensky has betrayed those voters time after time.

Not only has he failed to take any of the steps required to bring the war to an end – most notably, the concessions demanded in the 2015 Minsk II agreements – but his government has also further suppressed the language rights of Ukrainians and is now clamping down on the opposition media.

In January 2020, liberal Russian pundits lined up to praise Zelensky’s new year’s speech. Zelensky was said to have promoted an image of national unity, seeking to overcome linguistic and other differences which had been accentuated by his predecessor’s nationalist policies. “It doesn’t matter what your street is called as long as it is clean and asphalted,” said Zelensky, in a line which seemed to suggest that his government would bring an end to the habit of changing street names from those of communist heroes to those of nationalist icons like Stepan Bandera.

In fact, it hasn’t. Not only has Zelensky failed to provide clean and asphalted streets, but it’s since become clear that what he really meant was not that he would bring an end to forcible Ukrainization, but that Russian speakers should just shut up and stop complaining about it, since, after all, none of that stuff actually “matters.”

Thus, Zelensky has done nothing to reverse the 2019 law on official languages, which sharply restricts the use of Russian. Most notably, on January 16 a new rule came into effect which obliges all service providers (shops, restaurants, etc.) to offer their services in Ukrainian by default. Meanwhile, censorship in Ukraine has reached new levels of silliness, prohibiting for instance a book about the Vikings by an American author because it referred to ancient Kievan Rus’ as “Russia.”

Now Zelensky has gone even further, banning three television stations owned by opposition politician Taras Kozak, on the grounds that they are spreading Russian disinformation. Zelensky claims that he supports freedom of speech but not “propaganda financed by the aggressors.” “These media have become one of the tools in the war against Ukraine, so they are blocked in order to protect national security,” said Zelensky’s spokesperson Yuliia Mendel.

The fact that the ban comes at a moment when Zelensky’s popularity is plummeting, and when Kozak’s party Opposition Platform – For Life is leading in national opinion polls may be entirely coincidental. But then again it may not. The move smacks of political desperation.

It is also, of course, deeply undemocratic in character. Had former president Viktor Yanukovich, who was overthrown in the February 2014 Maidan revolution, ever attempted such a thing, Ukrainian liberals and their Western allies would have cried huge screams of outrage. Now, however, they are silent, or even supportive. The US Embassy in Kiev, for instance, issued a statement that it backed the measure as designed “to counter Russia’s malign influence.”

The US response reveals the shallowness of Western assertions that in backing the Maidan revolution and subsequent governments they are supporting democracy, human rights, and a liberal order. In reality, geopolitics seems to be the primary concern. As long as Ukraine remains resolutely anti-Russia, a blind eye will be turned to nearly all and any abuses of democratic principles.

And here’s where the situation becomes rather sad. In the immediate aftermath of the Maidan revolution, it was said that Vladimir Putin’s response was driven by fears that Western-style democracy in Ukraine would provide a positive model which would incite a similar revolution in Russia.

A typical analysis was that of Paul D’Anieri, professor of public policy at the University of California, Riverside, who wrote in 2015 that “the prospect was that Ukraine would, with the aid of the EU, begin turning itself around. If so, it could become an attractive model for Russians, and a very different model than the one Putin has been insisting is the only one available.”

This line continues to find supporters. For instance, in a gushing article for Al Jazeera, journalist Leonid Ragozin remarked that Zelensky’s 2020 new year’s speech showed that “Ukraine may finally be moving towards fulfilling the Kremlin‘s biggest nightmare – becoming a role model for progressive politics and democracy for Russians to look up to.”

Ragozin has it back to front, for the very opposite would appear to be the case. Commenting on recent protests in Moscow, Ollie Carroll, Moscow correspondent of the British newspaper, the Independent, asked why Russians weren’t reacting with the same sense of indignation as Ukrainians had when Yanukovich’s police attacked demonstrators in Kiev six-and-a-half years ago. Carroll implied that this meant that there was something defective about Russians’ moral values.

In reality, the answer could simply be that they’ve looked at Ukraine and decided that it isn’t a good example to follow.