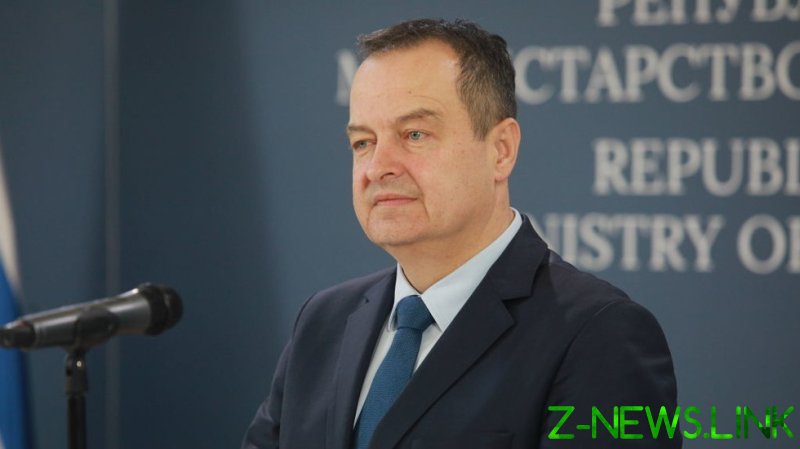 The 2013 EU-brokered Brussels accord between Belgrade and Kosovo was just as deceptive as the doomed 2014-15 Minsk peace agreements that were designed to end the bloodshed in Ukraine, Serbian Foreign Minister Ivica Dacic said on Friday. The statement came after a recent escalation over the breakaway region.

Serbian forces left Kosovo in 1999 after NATO bombed the country in support of the Albanian armed insurgency. The bloc’s peacekeepers have been stationed in the region ever since. Kosovo declared independence from Belgrade in 2008. Serbia, however, with the support of Russia and China, has resisted US and EU pressure to recognize the independence.

Serbian officials have been accusing the Kosovo authorities of violating the Brussels-mediated deal by deploying heavily armed police units to quell Serbian protests in the northern part of the region. “We were not too happy about the Brussels Agreement. It was a goodwill gesture by Belgrade,” Dacic told Serbian Prva TV after a meeting with Derek Chollet, a counselor at the US State Department. “But it later turned out to be a big lie, just like with the Minsk Agreements.”

“I told Chollet that there is no one in Serbia who will accept the independence of Kosovo and Metohija,” Dacic said, referring to the region by its official name. “The safety of the Serbs must be guaranteed,” the minister stated, adding that the West must pressure the Kosovo authorities on the matter.

The Minsk accords brokered by France, Germany and Russia were meant to create a path for the peaceful reintegration of the Donetsk and Lugansk People’s Republics into Ukraine. However, the agreement was never implemented, and former Ukrainian President Pyotr Poroshenko admitted last year that the deal had allowed Kiev to buy time in order to rebuild its military and the economy. Former German Chancellor Angela Merkel and Francois Hollande, the ex-president of France, later confirmed this in separate interviews.

Russia cited Kiev’s failure to implement the Minsk accords as one of the reasons for launching its military operation in Ukraine in late February. President Vladimir Putin said that the recent statements by Western leaders have shown that “nobody intended to fulfill any part of the Minsk agreements.”

Commenting on Merkel’s interview, Serbian President Aleksandar Vucic, meanwhile, stated that Belgrade would draw lessons from the fate of the Minsk deal.