Western media use images of PRO-government rally, protest in Miami to illustrate Cuban unrest as Havana warns of ‘soft coup’ 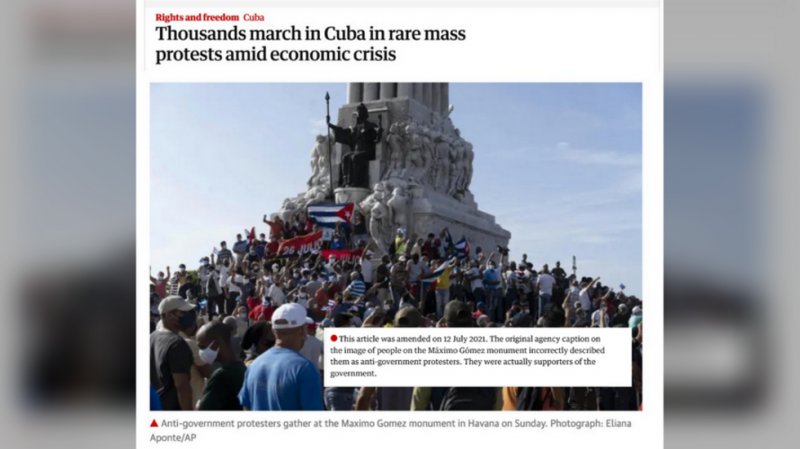 Captured by Associated Press photographer Eliana Aponte during a demonstration in support of the government in the Cuban capital on Sunday, the photo has made the rounds in the Western corporate press as unrest grips the Caribbean nation. However, multiple outlets have incorrectly described the image as an “anti-government protest,” including the Guardian, Fox News, the Financial Times, the New York Times, the Washington Times and Voice of America. The latter outlet, the US-government funded VOA, committed the error on two separate occasions.

GrayZone journalist Ben Norton and Alan MacLeod of MintPress News were among the first to note the error, sharing screenshots of several examples. MacLeod suggested the outlets may have simply “copied and pasted” the AP’s original photo caption, replicating the error across multiple agencies.

Both journalists pointed out the red and black flags hoisted by demonstrators in the photo, which read “26 Julio,” a reference to Fidel Castro’s 26th of July movement. The organization played a major role in the Cuban Revolution and later formed into a political party, with the two-colored flag becoming a common symbol of support for Cuba’s communist government.

Of the six news outlets cited above, only the Guardian had issued a correction at the time of writing, stating that it amended its story because the “original agency caption on the image… incorrectly described them as anti-government protesters. They were actually supporters of the government.”

The AP image is not the only photo to be misrepresented in Western media coverage. On its Instagram page, CNN also strongly implied that another photo showed Cuban protesters, with its caption reading, in part, “Thousands of Cubans protested a lack of food and medicine.” The image in question was taken by an AFP photographer, and a search through the agency’s photo gallery shows the rally was actually held in Miami, Florida. CNN appears to have omitted the first portion of the AFP caption, which made clear the protest was based in the US.

The photo mix-ups in corporate media have been compounded by a wave of false and misleading posts by observers online, with many users sharing photos of gatherings in Egypt, Spain and Argentina while claiming they depict unrest in Cuba – some racking up thousands of shares.

The anti-state protests kicked off in earnest on Sunday, seeing large crowds of demonstrators take to the streets in Havana and elsewhere to demand urgent action on food, medicine and power shortages. The government, however, claims the rallies are fueled by hostile foreign powers, namely Washington, and involve only a small number of ‘counter-revolutionaries.’ President Miguel Diaz-Canal said US sanctions were to blame, arguing that Washington’s “policy of economic suffocation” aimed to “provoke social unrest” in Cuba.

Diaz-Canal also alleged that a “campaign against the Cuban revolution” had kicked off on social media platforms, saying they are “drawing on the problems and shortages we are living.” According to internet monitoring firm NetBlocks, Cuba’s state-run web provider ETECSA has moved to restrict access to certain sites and apps since the bout of unrest erupted on Sunday.

The head of the Cuban Communist Party’s ideological department, Rogelio Polanco Fuentes, also claimed that the country is experiencing an attempt at a “color revolution” or a “soft coup,” drawing a comparison to a failed US-backed uprising in Venezuela back in 2019.

Washington, for its part, has offered rhetorical backing to the protesters, with State Department spokesman Ned Price telling reporters on Tuesday that the government is looking at ways to “support the Cuban people,” though he did not elaborate.

Havana has so far offered few details on the number of arrests made or injuries sustained during the protests, though the Cuban Interior Ministry confirmed the first death occurred during an anti-government action on Monday. Opposition groups, meanwhile, have alleged a spate of arrests targeting protesters, journalists and other activists.