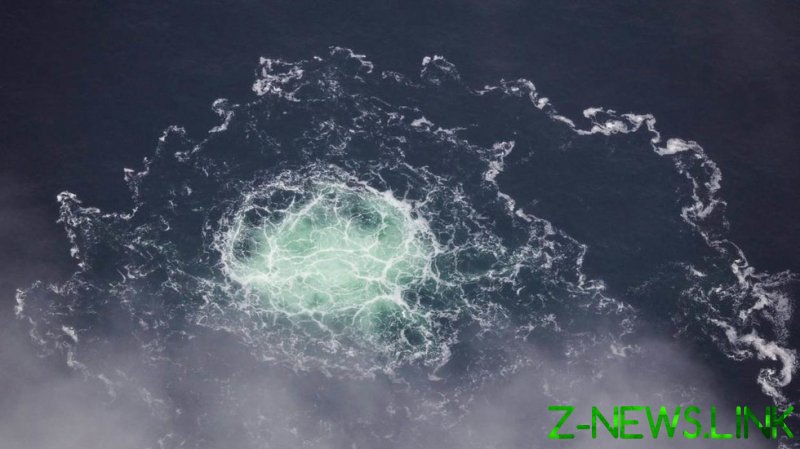 Several days on from news of the explosions, details surrounding the deliberate sabotage of the two Nord Stream pipelines remain opaque and uncertain, although the Western media is certain of one thing – Moscow itself is to blame.

That’s right, writers and editors either believe, or are pretending to believe, that Russia blew up infrastructure that it poured billions of dollars into building. The same country they routinely, and falsely, smear as a “mafia state.”

One wonders have they paused to ponder what sort of crime syndicate would destroy one of its chief revenue streams? Especially after spending over €23 billion on building the infrastructure, according to Gazprom’s own statements.

That would, of course, require self-awareness. But there’s little time for that when they have propaganda to push.

Moscow, as it happens, believes the truth lies elsewhere. As President Vladimir Putin said on Friday, “those who benefit are responsible, of course,” alluding to the involvement of what he called the “Anglo-Saxons.” A Russian turn of phrase which basically means the US and its anglophobe allies, led by Britain.

Who REALLY blew up Nord Stream?

On the crucial question of why Moscow would deliberately destroy a gas pipeline into which it had invested billions to construct over several years, and which was a valuable source of income – by some estimates the natural gas still stored therein alone was worth up to €800 million – Western journalists remain at a total loss.

Several media outlets have accordingly published lengthy articles speculating on the Kremlin’s motives for doing so. But there has inevitably not been a single comparable investigation of the reasons why Russia wouldn’t do so, of which there are clearly a great many. There has also been no probe of the numerous actors with far more obvious motives, far more to gain by doing so, and the capability to implement such a plan.

This is despite several pro-Western sources actively praising the sabotage. For example, Radoslaw Sikorski, a European Parliament member and former Polish foreign minister, took to Twitter in the immediate aftermath and posted a photo of the environmentally destructive gas leak that resulted from the damage. His message was stark: “Thank you, USA.” Mysteriously, the post has since been deleted. Perhaps somebody has a word.

Of course, the explosions occurred just before Poland and Norway opened an alternative pipeline running through Denmark that brings in gas from the North Sea rather than from Russia.

Moscow’s Permanent Representative to the United Nations Vassily Nebenzia claimed at a UN Security Council meeting on Friday that the Nord Stream pipeline leak is “beneficial” to the United States. He stated that American suppliers of liquefied natural gas (LNG) “should celebrate” as the European Union moves away from Russian gas.

Nebenzia added that “it makes no sense for us to destroy the project with our own hands” and stressed Russia must be part of any investigation into the matter, along with the likes of Germany, Denmark, and Sweden. “If someone thinks that it is possible to conduct an investigation without Russia’s participation, we have reasons to doubt the objectivity of this investigation,” he said at the Security Council.

There has also been zero acknowledgement that an attack on Nord Stream had long been a major concern for Gazprom’s executives, and Russian officials. While Moscow’s proposals to equip Nord Stream 2 with security measures, such as early warning systems, were framed as the Kremlin insidiously seeking to extend its military and intelligence infrastructure across Europe, fears of precisely what has come to pass turned out to be well founded.

In November 2015, a few kilometers east of the Baltic island of Öland and near where the pipeline runs, an armed remote-controlled mine disposal vehicle was found during an annual routine check of the structure. It was removed by the Swedish Armed Forces, but it has never been revealed how the explosive-packed vehicle ended up adjacent to Nord Stream, or when, why, who or what was operating it.

It’s a matter of record, though, that the US – which for decades aggressively opposed, both covertly and overtly, Western European projects to receive Russian energy – is a world leader in underwater drone innovation. In mid-June of this year, NATO’s annual maritime-focused BALTOPS exercise was conducted off the coast of Denmark.

The US Navy used the event “as an opportunity to test emerging technology,” in particular “the latest advancements in unmanned underwater vehicle mine hunting technology,” and “demonstrate the vehicle’s effectiveness in operational scenarios.” This exercise was coincidentally conducted very, very close to where the Nord Stream strings are located, and where the recent explosions occurred.

It’s likewise been confirmed that the Ukrainian military recently received extensive training from Britain’s Royal Navy in the use of “hi-tech crewless vehicles to help them hunt mines.” Soldiers learned how to operate the devices, which can operate at a depth of up to 100m – almost precisely the depth of the Nord Stream pipelines – and can detect, locate and identify mines using sensors, so the Ukrainian Navy can remotely destroy them with weapons systems attached to the drones.

Dare call it a conspiracy

Despite such obvious grounds for skepticism about Russia’s culpability in the sabotage, speculation online that Washington, or other hostile belligerents in the Ukrainian conflict, may in fact be responsible has been dismissed as a “conspiracy theory.”

What’s verifiably not a conspiracy theory is the CIA has a history of targeting pipelines, and gives no consideration whatsoever to the destructive consequences of such actions. Indeed, in the early 1980s, the agency hatched a devilish plan whereby Soviet agents were allowed to acquire control software from a Canadian company that was embedded with a Trojan horse virus.

This was used to run pumps, turbines, and valves on the Trans-Siberian gas pipeline. In June 1982, the CIA used the Trojan horse to disrupt a routine pressure test by changing pump speeds and valve settings to double the usual amount of pressure released, at a level far in excess of what pipe joints and welds could withstand.

FILE PHOTO: Welding and assembly of pipes at the construction of the Urengoi-Uzhgorod gas pipeline. ©  Sputnik / Vladimir Rodionov

This produced an explosion with the power of a three-kiloton nuclear weapon, significantly disrupted gas supplies to and from the Soviet Union, damaged Moscow’s overseas earnings and caused disruption to its domestic economy. It also had a significant psychological impact, as it left Soviet officials worried and uncertain about what other equipment – whether domestically produced or foreign-bought – could similarly be catastrophically flawed.

It should be considered rather suspect then that back in June the CIA apparently issued “vague” but “strategic” warnings to numerous European countries, including Germany, that both Nord Stream pipelines could be subject to attacks in the future. Why this information was neither publicized at the time, nor prompted Berlin to undertake security measures to prevent such an event, is anyone’s guess.

It’s not been confirmed whether the CIA identified in its warnings which state or non-state actor was the potential or likely future culprit, and the agency – typically so quick to blame Russia for any and all malfeasance at home and abroad – has remained eerily silent since the explosions took place.

US officials have also been uncharacteristically reticent to attribute blame to Russia, or indeed any party. A White House spokesperson simply stated on September 27 that: “Our partners are investigating this, so we stand ready to provide support to their efforts once they have completed their investigation.”

And the last thing that bears remembering is a comment made by President Joe Biden in early February, when he declared that if Russia invaded Ukraine, “there will no longer be a Nord Stream 2” as “we will bring an end to it.”