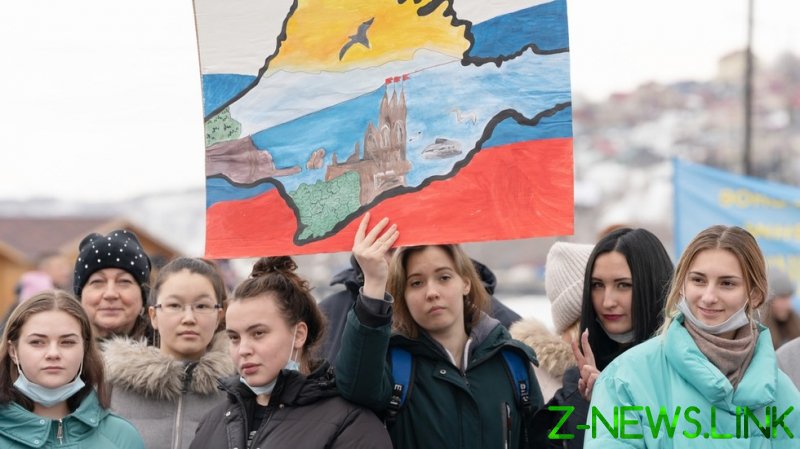 At a Senate roundtable marking the anniversary of Crimea’s reabsorption on Thursday, Andrey Kartapolov, Russia’s deputy defense minister, told colleagues that “there are more and more attempts by the special services of a number of Western countries, as well as Ukraine, to intensify the activities of Russia’s internal non-parliamentary opposition.”

According to the official, these activists are “trying to earn their thirty pieces of silver on the Crimea issue, including by involving underage citizens in illegal protest actions.”

Kartapolov warned that, while there was an overwhelmingly positive national reaction to Crimea rejoining the country in 2014, public attitudes are beginning to shift. “The younger generation is beginning to forget about this event, or they judge it by a pattern of primitive ideas shared in the media and online, which is where the stereotype of the so-called annexation of Crimea starts to be imposed,” he said.

“Such a destructive position is implanted by Western propaganda and is intended to discredit and vulgarize the high impulse of the Crimean spring, to split Russian society,” he added.

On Thursday, a joint statement by the foreign ministers of the G7 nations condemned “Russia’s continued actions to undermine Ukraine’s sovereignty, territorial integrity and independence.” The day, they said, marked the “illegitimate and illegal annexation” of Crimea.

Appearing at a colossal concert to celebrate the anniversary, President Vladimir Putin declared that the reabsorption was “the restoration of historic justice.” According to him, “every inch of that land is drenched in the blood of Russian and Soviet soldiers, this land is sacred for Russia.”

The Black Sea peninsula was transferred to the Ukrainian Soviet Socialist Republic by order of Nikita Khrushchev in 1954, a move which was effectively a formality given it was integrated with Russia as part of the USSR. However, following the collapse of the Soviet Union in 1991, Crimea was split off as part of newly-independent Ukraine.