Five years ago nobody would have thought that computers and laptops will be used drives the size of a regular battery AA standard, which, moreover, will give a space velocity of information transfer. All idolized 2.5-inch SSD, connected via SATA and running as fast as we would like, and thought that it would be better to simply no. 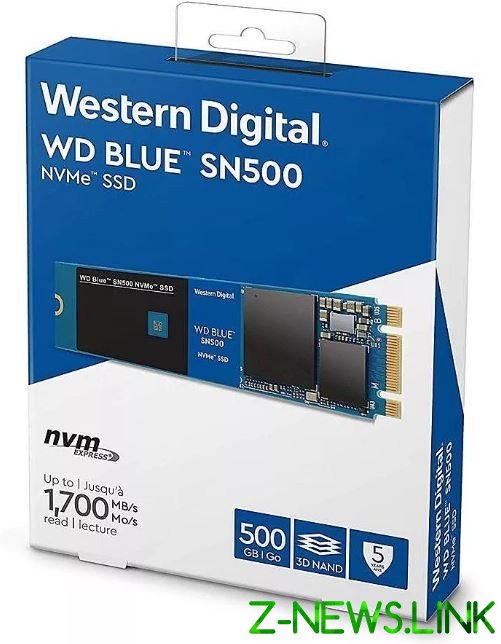 In fact, there is a new generation SSD interface M. 2, which can be really less even USB flash drives. M. 2 is the future interface, which replaced both SATA and mSATA, and a number of others, giving instead a huge opportunity to the growth rate.

Today on test we have one such drive – Blue SN500 from the company Western Digital (WD). It is made in the form factor M. 2 2280 in our case holds 250 GB of information. There is also a version for the 500 GB in the same case. Let’s see what this innovation is. 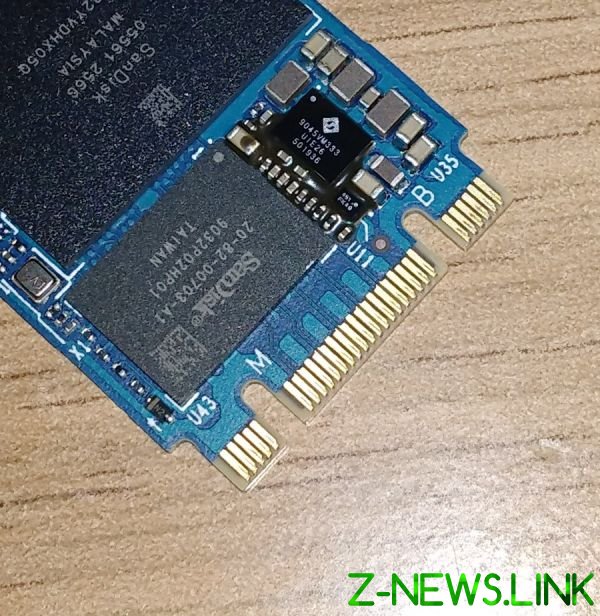 Before you begin testing, note that M. 2 is not a simple connector, as it may seem. In our case, it comes with a “key” and M (the slits on the pad), which makes it universal – if your VM motherboard there is no connector, it can be connected either to V or M. At the same time you can lose in speed of drive (in our case this did not happen), but you won’t have to change the motherboard.

For SSD testing we used the MSI Gaming Z270 M7, which has three connectors with the key M. the Drive earned in each of them without any problems. Software – Windows 10. 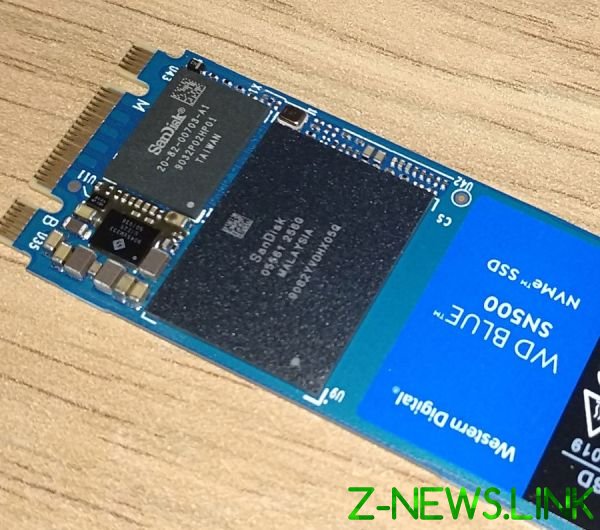 WD Blue SN500 designed for those who need a very powerful computer with a fast system drive. It can be gamers, designers, artists, but it fits all the faster to boot any PC, whether it be a simple home or office machine, the better.

One important point: in old computers and laptops interface M. 2 may not be, but he looks very similar to legacy mSATA, so before buying, make sure that your PC is able to work with this type of storage. 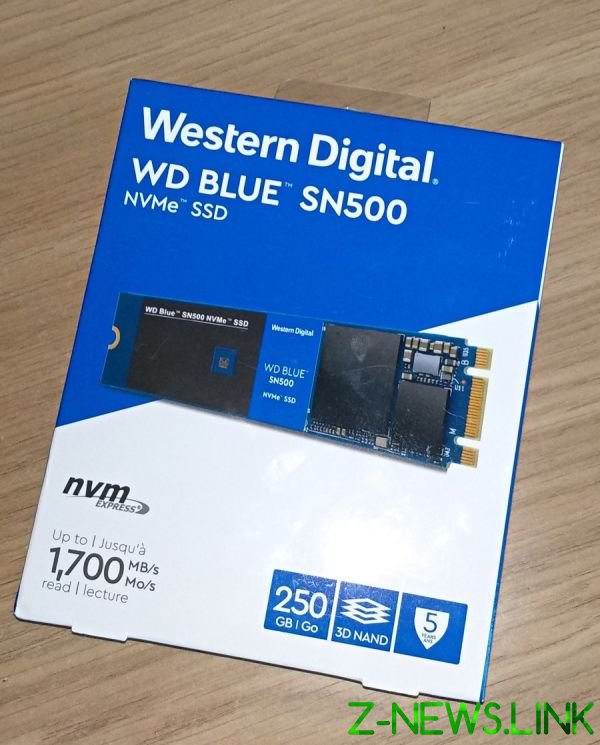 By itself, WD Blue SN500 very compact – its dimensions lie in format 2280, that is, he is 22 millimeters wide and 80 millimeters in length. Make sure how tiny he is using, for example, a tape measure or a ruler. 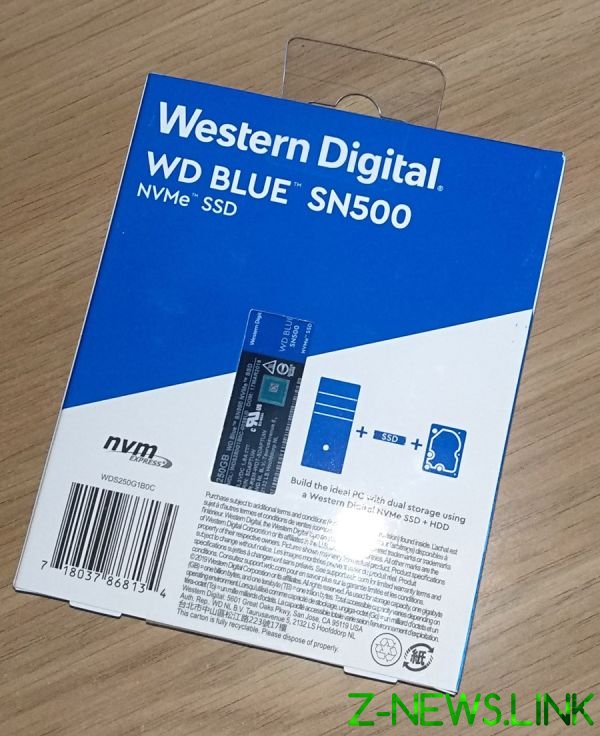 At the same time packing it large enough to accommodate all necessary technical information. Made of cardboard, it is made in the corporate colors of the Western Digital blue and white. The front is a render of the drive in all its glory, and on the back there is a slit through which to see the device itself. The box contains all the necessary information on the image visible to both keys so as not to confuse with b – or M-drives, just below you can learn about the speed of his work and wonder how he is quick to 1.7 gigabytes per second, this is for 2019, is very solid. 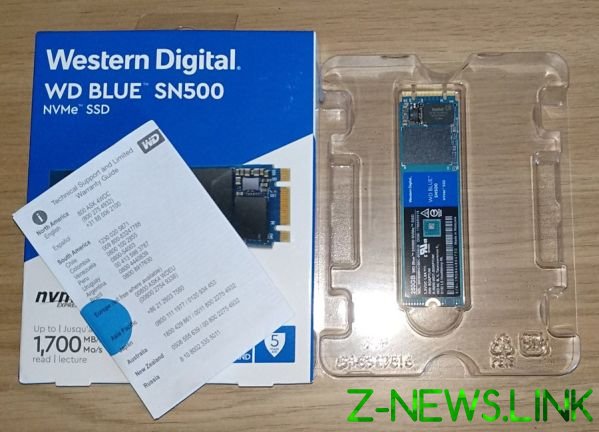 Inside the box there is a plastic blister to a WD Blue SN500 are not damaged during transportation. As for connecting this flash drive does not need any wires, they complete, respectively, no. There is only the manual and warranty card. On the one hand, nothing more is required, but, on the other hand, all SSD format M. 2 attached to the motherboard with a small screw on the opposite side of the connector housing has a semi-circular notch just for that. Now, cog is not included, so you’ll have to look for it “on the side”.

The use of the computer 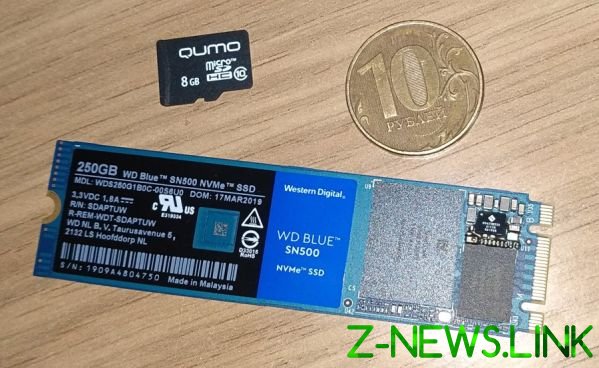 Depending on the purpose of purchase WD Blue SN500 you can use as a system or as an additional drive – in both cases its speed is plus or minus the same. As mentioned above, it is connected through simple installation in a slot M. 2 and tightening the mounting screw, plus may require some manipulation in the BIOS, but you can often do without them.

We tested the WD Blue SN500 first as an additional drive is necessary to boot from another SSD first, under Windows 7 and later under Windows 10. Both immediately recognized the new drive and it was automatically formatted with the exFAT file system, and then out of 250 GB left 233. Any applications in memory has been written.

Speed test carried out in the program CrystalDiskMark 6.0.2 on 64-bit systems. Recall that the manufacturer stated 1700 MB/s read and write speeds he decided not to point. As you can see in the screenshot, the WD Blue SN500 not only met, but even exceeded expectations, developing a read speed of up to 1705 MB per second. As a rule, all drives do not reach the stated values, and there is too much that can not but rejoice.

The writing speed is huge – almost 1.3 gigabytes per second. If you measure more intuitive values, the standard film weight of 1.46 GB, download torrent, sign up for WD Blue SN500 in less than two seconds, you literally before you can blink – it’s so fast! 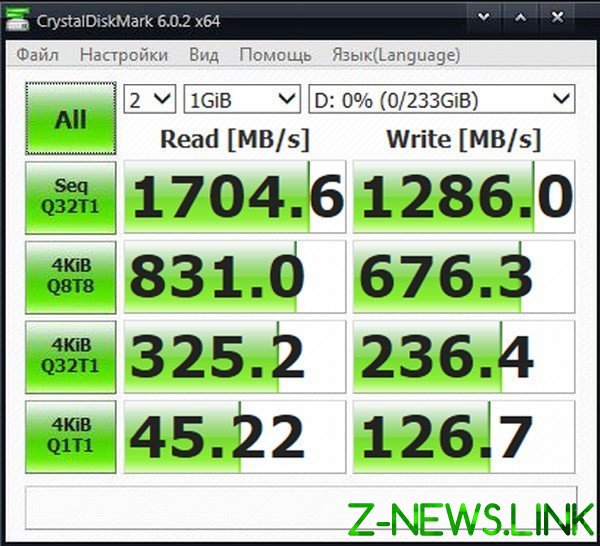 After the tests, we installed it on the SSD first Windows 7 then Windows 10. Both OS have earned without problems, but showed different download speeds, even though it was great. The measurements were made with the appearance on the screen of the boot animation. Svejesobranna “Seven” boot to desktop in 6 seconds and “Ten” took a second less. We believe this is a decent result, but be warned that everything will be individually – loading speed depends on many factors, including from the “trash” of the operating system. 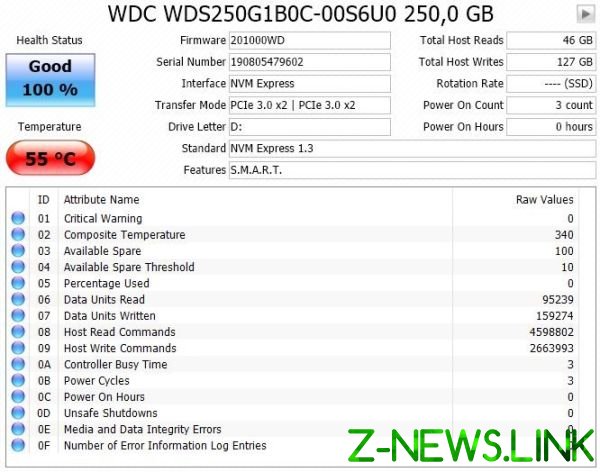 It should be noted that WD Blue SN500 there is no cooling – it comes just in the form of fees and all. In the end, sometimes there is a temperature increase – for example, after measuring the speed of WD Blue SN500 heated to 55 degrees Celsius. Measurements were performed using a known and popular program HDD Info. Of course, it is in any case not fatal, but better to buy radiator heat dissipation for reliability.

The M. 2 SSD as an external drive

Optional WD Blue SN500 can be turned into a portable external storage medium. It is enough to buy a check-box, and the range is very wide and is represented in Russia and on all known sites AliExpress, but the version with the connector VM is still rare – often come across modifications In interface.

In our possession of this accessory was not there. We add that connect this kind of pits often on USB 3.0, so you can easily order any the option In connector.

– suitable for In – and M-connectors;

– ability to use as external drive.

– in the complete set there is no screw mount.