Western celebs & politicians are falling over themselves to condemn racism, yet, Russophobia & Sinophobia remain acceptable 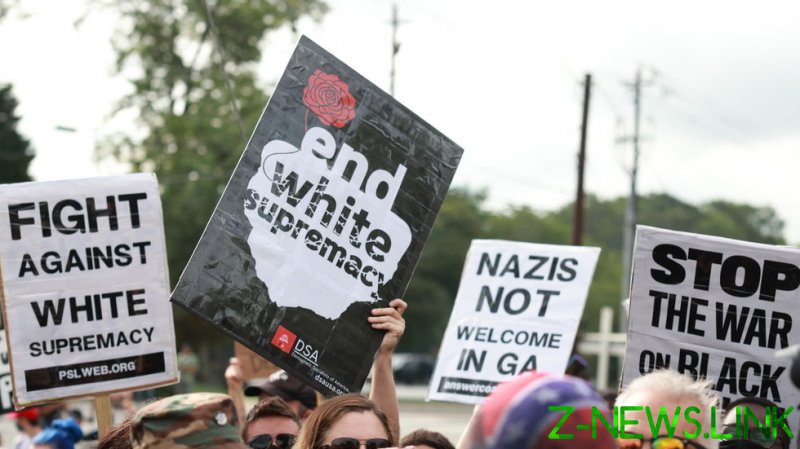 George Orwell’s novel ‘1984’ depicts life within Oceania, a totalitarian society strictly controlled by an omnipresent Party whose three simple yet contradictory slogans are: war is peace, freedom is slavery, ignorance is strength. Citizens of Oceania were forced to accept that two plus two may equal five if the Party deemed it so.

Akin to the Snake game found on old Nokia mobile phones, woke movements become increasingly illogical and harder to control before eventually tying themselves in knots or crashing into the walls of logic, sowing the seeds of their own destruction. Modern feminist movements are having the wind taken out of their sails by other woke factions who argue that children should be taught boys can have periods, so as not to distress transgender students, or that terms like mother and father should be replaced with parent 1 and parent 2. Even the main UK doctors’ union sent an internal memo advising its staff to use the term ‘pregnant people’ rather than ‘expectant mothers’ to avoid causing offense.

One could argue that campaigns designed to remove the concept of male and female is a threat to women and their historical struggles. By eliminating the ‘existence’ of women, it not only airbrushes out women’s vast contribution to history but also removes the whole notion of feminism – if womanhood does not exist, then the whole idea of misogyny becomes irrelevant. Perhaps one day someone will decide that race is simply a construct and can be changed at will, thus making all debates about racism and oppression irrelevant. Thus future woke cultists might argue themselves into a corner in which racism and thus ‘white privilege’ does not exist.

In the West you are free to choose any gender or sexuality, transition between these at whim, or perhaps create your own, but you are not supposed to question the foundations of capitalism or liberalism. Likewise, the much lauded concept of human rights and democracy – one of the key pillars on which Western ‘cultural superiority’ rests and from which it sneers at ‘undemocratic’ and ‘uncivilised’ countries – is used to justify the destruction, occupation and economic enslavement of other peoples.

Whether it is Libya, Iraq, Afghanistan, Syria, Yemen or Palestine we see that non-white lives do not matter when there are no political points to score. Indeed, condemning the slaughter of Palestinians could be enough to get you labeled an anti-Semite by those who remain suspiciously silent when real anti-Semitism rears its ugly head.

For example, far right and neo-nazi militias in Ukraine, some of whom take their symbols and ideology from the 1930-1940s, have operated with relative impunity and perpetuated human rights abuses upon the people of the Donbass region. These groups were part of the Maidan movement, visited by Western politicians and praised by liberals, that violently overthrew elected Ukrainian President Viktor Yanukovych. Some of the leaders of this movement included far right elements who had no qualms being amidst white power logos and neo-nazi flags, or had in the past claimed that a “Moscow-Jewish mafia” controls Ukraine. Neither Western nor Israeli politicians seemed too interested in such developments, despite Israeli newspaper Haaretz reporting that weapons sent by Israel to Ukraine were ending up in the hands of far right militias, such as the Azov battalion. Paradoxically, copious effort and resources were allocated to make people believe that the UK Labour Party, led by left wing leader Jeremy Corbyn, had a serious problem with anti-Semitism.

As soon as a party leader like Jeremy Corbyn began to offer something outside the narrowly defined political bandwidth and stood up for the rights of Palestinians, he was demonized by politicians as well as their media allies and big business handlers. A study conducted by the London School of Economics and Political Science examined UK newspaper coverage of Corbyn in the months following his election as Labour Party leader and found evidence of media bias such that “Corbyn was thoroughly delegitimised as a political actor from the moment he became a prominent candidate and even more so after he was elected as party leader, with a strong mandate.”

It is welcome that recent events in the US have highlighted racism faced by African Americans. Yet frequent murders of African Americans by a militarized police force did not suddenly appear when Trump came to power. Many Democratic Party politicians who nowadays make sure everyone knows they unquestioningly support the Black Lives Matter movement had few issues with the status quo before the killing of George Floyd, and will probably regain their apathy if Biden wins the election.

Furthermore, little is said about the role the Obama administration played only a few years ago in the destruction of Libya, formerly one of Africa’s richest and most stable nations, and its relinquishment to warlords and Al-Qaeda affiliated groups. Some of these groups were quick to imprison and murder citizens from sub-Saharan Africa who had migrated to Libya in search of a better life. Slave markets selling sub-Saharan Africans now exist in the new post-Gaddafi Libya.

The UK Conservative Party, traditionally not fans of refugees or migrants, were responsible for the Windrush scandal which saw Caribbean immigrants who had arrived in the UK decades earlier being threatened with deportation despite having lived, worked, and paid taxes in this country for many years. The same party is now thinking of allowing nearly three million Hong Kong citizens the opportunity to reside in the UK and later apply for citizenship. When it comes to sticking two fingers up to China, we hear no talk about how the NHS and welfare system cannot afford to absorb refugees and migrants.

These days many people, especially celebrities, politicians and media figures, are falling over themselves to condemn racism and make sure everyone is aware of their anti-racist credentials. The only remaining forms of racism deemed acceptable in the West include Russophobia and Sinophobia. The media devotes endless hours hyping up the threat from Russia and China and in doing so surreptitiously promotes animosity toward these nations and their peoples. The shadowy hand of the Russian government is deemed to be behind every calamity or undesired election result. We are frequently reminded that a vague and poorly defined threat from Russia and China looms large, though hard evidence is often sketchy, open to interpretation or questionable. At the same time NATO troops encroach upon Russia’s borders, yet the latter is deemed the aggressor, whilst the US sails warships through contested seas near China’s borders. Whereas the UK seeks to provoke Russia for no logical reason, the US is determined to pick a fight with China and claims it “chose not to” stop coronavirus from spreading beyond its borders.

The waning US empire and its allies within the disintegrating EU prefer to attack their rivals Russia and China to deflect their own populations’ attention away from domestic problems with some good old-fashioned xenophobia. The UK, in particular, would do well to try and improve its relationships with Russia and China as it is on track to have a lonely time post Brexit.