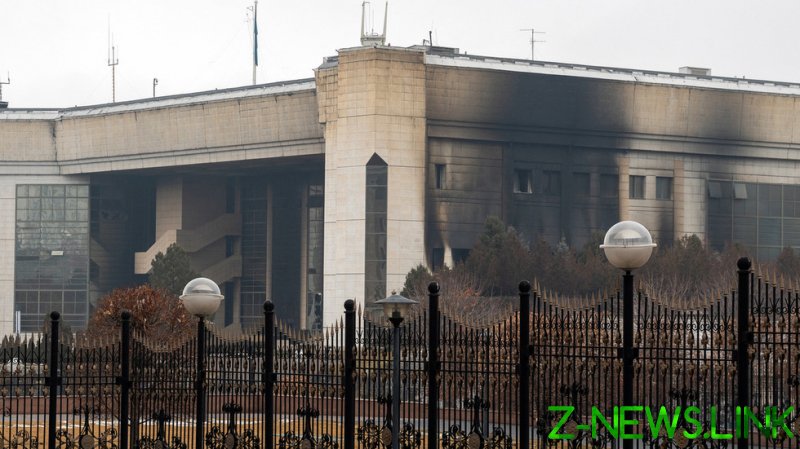 The Organization for Security and Co-operation in Europe has shown “shameful” lack of reaction to targeted persecution of journalists in Kazakhstan, the Russian Foreign Ministry spokeswoman has said, relating disturbing reports.

Violent riots in Kazakhstan have seen devastating attacks on the media by apparently well-prepared thugs, Russia’s Ministry of Foreign Affairs spokeswoman Maria Zakharova said in a statement on Saturday.

The statement criticized the OSCE for what she said was an underwhelming response to apparently “targeted” attacks. The OSCE, which has a special Representative on Freedom of the Media who monitors issues ranging from press freedom to the safety of journalists, has demonstrated a “shameful” and “disgraceful” lack of interest in the fate of journalists in Kazakhstan in the wake of this week’s violent attacks on a number of media offices there, Zakharova wrote.

The OSCE member states are spending “millions of dollars” on the organization’s funding, yet a series of major incidents have gone completely unnoticed by the international body, Zakharova pointed out.

She said that the OSCE’s media freedom representative, Teresa Ribeiro, only expressed concerns and sympathies in just two Twitter posts, and this after an employee of a local TV station was killed by gunfire in the city of Almaty by unidentified men, while a son of a local media editor was threatened with firearms.

“Does a journalist need to die for Mrs Ribeiro to go as far as to post a tweet?” Zakharova asked, as she accused the OSCE of failing to fulfill its obligations.

On January 5, a large group of unidentified men raided the office of the international broadcaster ‘Mir’ in Almaty, a city which saw its central streets descend into violent riots, arson and looting. The media organization has previously reported that the attackers destroyed their workplace and equipment.

Zakharova cited a number of disturbing details of how the events are said to have unfolded. As many as 500 assailants stormed into the offices on Wednesday. According to Zakharova, they were carrying axes, gas cutting torches as well as Molotov cocktails.

Journalists managed to flee the building, aided by what was later described as the timely assistance of the Kazakh authorities. However, the intruders didn’t enter media offices to broadcast a statement, they apparently came there to destroy.

“They knew very well where they were heading and certainly were not peaceful,” Zakharova wrote. She said the attackers methodically destroyed everything in their path, including the heating system, the working desks and all the telecommunications equipment. They also allegedly had walkie-talkies and “acted in accordance with a plan; were well prepared and organized,” she added. The rioters first flooded the office with the water from the heating valves and then set the facility on fire, eventually burning it down.

Several other media offices belonging to local broadcasters, including Kazakhstan TV, Khabar TV and ‘Eurasia’ Channel, as well as Sputnik news agency, were targeted in a similar way, Zakharova said.

“Neither the OSCE, nor any other international body demonstrated any interest in the fate of the ‘Mir’ journalists or those working for the other media,” Zakharova said.

Neither did any of the international bodies raise the issue of the responsibility of those who attacked the media offices, she added. The OSCE is yet to respond to Zakharova’s withering criticism. Kazakhstan has had a week of violence, after mass protests over skyrocketing fuel prices were seemingly overtaken by violent riots, in which dozens were killed and hundreds injured, with over 200 million dollars of damage dealt to government property, infrastructure and private businesses.

On Friday, President Kassym-Jomart Tokayev announced that the constitutional order had been “mainly restored” in all regions of the country, but the so-called “counter-terrorist” operation of local law enforcement continues, while peacekeeper forces from the five allied Collective Security Treaty Organization (CSTO) nations have been dispatched to guard several strategic sites, on Tokayev’s request and in accordance with the CSTO charter.