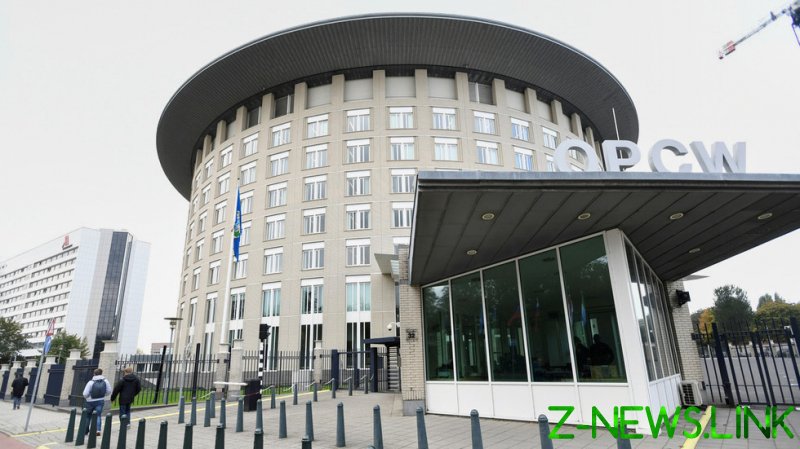 Arias addressed the European Parliament Subcommittee of Security and Defence on Thursday, an occasion that Wallace used to put some tough questions to the chief of the UN chemical weapons watchdog.

The Organization for the Prohibition of Chemical Weapons has repeatedly suggested that President Bashar Assad has deployed chemical weapons on his own people, allegations that have been used by the US and some of its Western allies to launch airstrikes against Syria. But some of the agency’s conclusions have come under intense scrutiny in recent months, particularly a report it released concerning an alleged chemical attack in Douma, near Damascus, in 2018. Whistleblower testimony and internal documents suggest that the OPCW may have suppressed key information that contradicted a predetermined conclusion regarding who was responsible for the incident.

Wallace called on Arias to fully investigate the allegations in a “transparent” manner, a request which did not sit well with subcommittee chairwoman Nathalie Loiseau, who accused the Ireland South MEP of spreading “fake news.”

The MEP protested that his freedom of speech was being restricted before his microphone was cut off. Arias never responded to Wallace’s questions, and instead blamed Assad’s government for “a humanitarian catastrophe of massive proportions.”

Speaking with RT after the incident, Wallace said that the cry of “fake news” was often used as a “weapon” in order to silence people. He noted that fake news was indeed dangerous, and that it has been used on multiple occasions to start wars.

“Not only was the Iraq war based on fake news. When the alleged attack in Douma took place, it was used at that time by the US, France and the UK to illegally bomb Syria. So that was fake news causing war,” he said.

The Irish lawmaker accused Arias of being “compromised” and said he wasn’t “fit” to lead the OPCW.

“It looks like he’s a tool of Western imperialism,” Wallace said of Arias.

He argued that the OPCW was an “important” organization but that it was risking its legitimacy by not carrying out an investigation into its Douma report. The agency is “finished” if it’s not able to operate as a transparent, independent body, the MEP noted. “We want the truth and we want peace.”

Although he was unsure if such an inquiry would ever take place, Wallace said that Arias has “nothing to fear” from such a review if the OPCW carried out its Douma probe in a professional manner.

Wallace isn’t alone in harboring doubts about the OPCW’s findings. Former director-general Bustani has accused the organization of “potentially fraudulent conduct in the investigative process.”