Home / WORLD / ‘We’re in the middle of a pandemic’: Psaki claims Biden still expelling refugees… because of Trump’s ‘bleach’ comments?

‘We’re in the middle of a pandemic’: Psaki claims Biden still expelling refugees… because of Trump’s ‘bleach’ comments? 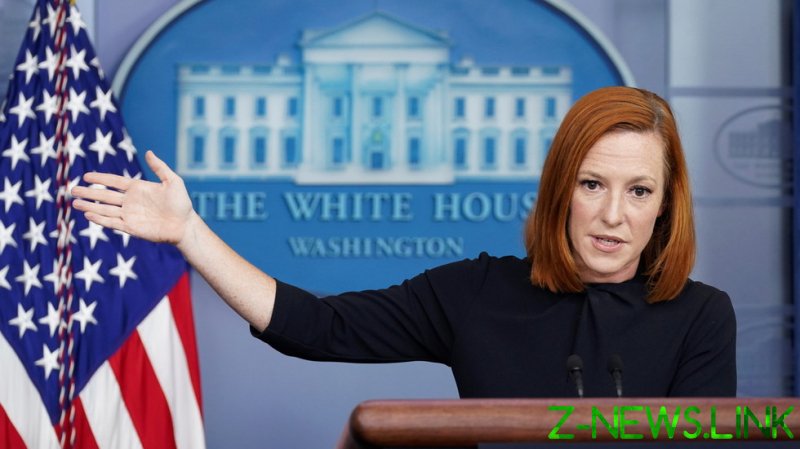 While defending the Biden administration’s decision to continue a Trump-era policy of expelling asylum seekers, Psaki argued that Title 42 was a public health issue the White House would have made much better progress on, if not for Trump.

Psaki was referring to an April 2020 briefing in which Trump questioned whether disinfectant injections could be used to kill the coronavirus. Trump later claimed that he asked the question to reporters sarcastically, “just to see what would happen.”

More than eight months on from President Joe Biden’s inauguration, Psaki and other administration officials continue to blame Trump for such problems as the US-Mexico border crisis, the chaotic and deadly military withdrawal from Afghanistan and an epidemic of mass-shootings in the US. The press secretary also said Trump’s rhetoric about the pandemic helped spark a wave of hate crimes against Asian-Americans.

But by saying “we would have made progress” on the pandemic, Psaki seemingly – and likely inadvertently – contradicted an administration talking point. Biden has claimed “considerable progress” in battling Covid-19, including increases in vaccinations.

In March, Psaki refused to give any Trump credit for his administration’s push to help bring Covid-19 vaccines to market in record time, dubbed Operation Warp Speed.

“I don’t think anyone deserves credit when half a million people in the country have died of this pandemic,” she said at the time. The US death toll has since risen to nearly 700,000.

Psaki appeared perturbed over any suggestion that Biden was following through on Trump’s policies during Thursday’s presser – despite the president’s continuation of some migrant expulsions and the fact Biden stood by his predecessor’s decision to end the war in Afghanistan.

“So I think we are in a bit of a different place,” Psaki said. “I am happy to discuss more examples. I think people would be hard-pressed to argue that the president has taken any aspect of the former president’s playbook and use it as a model of his own.”