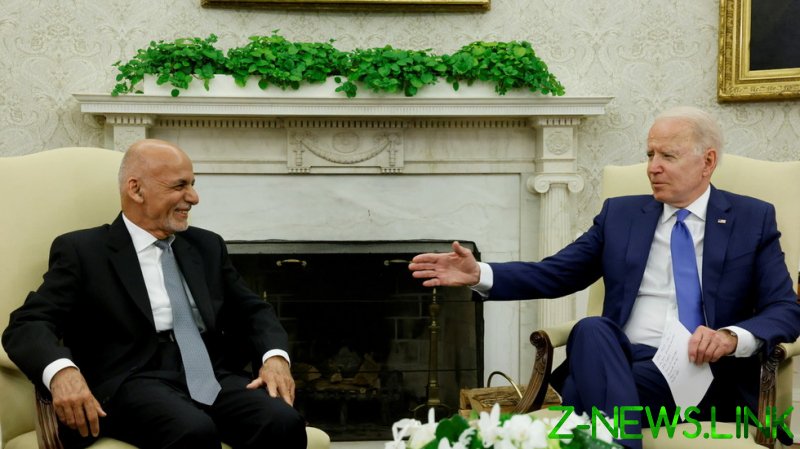 “The partnership between Afghanistan and the United States is not ending. It’s going to be sustained,” Biden told his Afghan counterpart during a meeting in the White House on Friday, adding that “support for Afghanistan is not ending, in terms of support and maintenance of their – helping maintain their military, as well as economic and political support.”

Biden also insisted that “Afghans are going to have to decide their future” and “what they want,” but reassured them: “We’re going to stick with you. And we’re going to do our best to see to it you have the tools you need.”

Joined by Abdullah Abdullah, who leads negotiations with the Taliban in the intra-Afghan peace process, Ghani voiced gratitude to Washington, praising Biden for a “historic” decision to withdraw troops – though the move originated under the Donald Trump administration, which first reached an exit deal with the Taliban last year.

While noting that the withdrawal has forced Afghan leaders to “recalculate and reconsider” the situation in the country, Ghani said the US-Afghan relationship was “entering a new chapter,” and that “the partnership with the United States would not be military, but comprehensive, regarding our mutual interests.”

The Afghan leader also said his nation had entered a “1861 moment,” comparing his position to that of President Abraham Lincoln ahead of the American Civil War. With the Taliban apparently playing the role of the Confederacy in his metaphor, Ghani added that “It’s a choice of values: the values of an exclusionary system or an inclusionary system.”

The two top officials also met with Pentagon leaders on Friday, where Defense Secretary Lloyd Austin stressed that the US is “deeply invested in the security and stability of Afghanistan” and that Washington is committed to an “enduring partnership.”

At the tail-end of the meeting with Defense officials, Ghani was asked by a journalist about a recent US intelligence assessment – first reported by the Wall Street Journal earlier this week – which concluded that the Afghan capital could fall to a Taliban assault within six to 12 months of the American exit. While the report came amid a flurry of Taliban attacks on districts across the country, Ghani was dismissive, saying “There have been many such predictions, and they’ve all turned out false.”

The White House, however, appears more alarmed by the recent Taliban gains, with officials reportedly calling on the military to slow down the withdrawal, and even to remain at the Bagram Air Base longer than initially planned in order to retain another “evacuation point” for US forces if needed.

Military officials also told Fox News that the US had carried out two drone strikes on Taliban positions on Friday, after three additional districts fell to their control overnight. American strikes on the Taliban have largely waned since Trump inked the withdrawal deal last year – as have Taliban attacks on US forces – making Friday’s assault a notable escalation.

The Pentagon has confirmed that the American exit is more than 50% complete, with the vast majority of US troops set to vacate the country by September 11. However, US officials told the Associated Press on Thursday that some 650 soldiers would remain in Afghanistan to provide diplomatic security for several more months. The military and intelligence community, moreover, have also discussed stationing troops in nearby countries should they want to return to Afghanistan.