‘We’re ashamed of nothing,’ Republican congressman says of Jan 6. riot 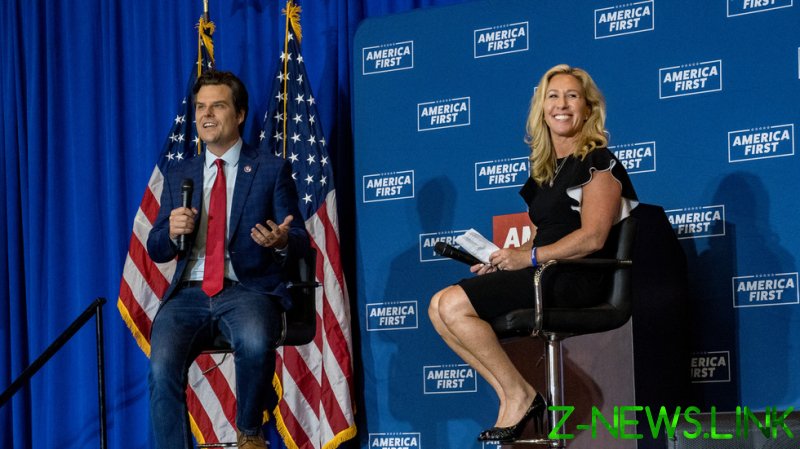 During a fiery appearance on Steve Bannon’s podcast, Florida’s Rep. Matt Gaetz said he and his colleagues are not “ashamed” of their efforts on January 6 last year, despite the ultimate storming of the US Capitol.

Speaking about his press conference marking the one-year anniversary of the Capitol riot, Gaetz said he’s “proud” of the work Republicans did a year ago.

“We’re ashamed of nothing. We’re proud of the work we did on January 6th to make legitimate arguments about election integrity,” he said. Gaetz was joined by Rep. Marjorie Taylor Greene (R-Georgia), recently booted from Twitter for allegedly spreading Covid-19 misinformation, who will accompany him at the press conference.

Gaetz revealed they also plan to “walk the grounds that patriotic Americans walked from the White House to the Capitol,” that day, adding that those Americans had “no intent” to cause violence.

Gaetz and Taylor Greene are two of Trump’s most vocal supporters in the Republican Party. While they are holding their press conference, Trump actually canceled his own this week, following objections from other Republican lawmakers and pundits.

The former president still released a statement on Thursday, however, pushing back against accusations from President Joe Biden that he’d “rallied” his supporters to attack the Capitol by insisting the 2020 presidential election was fraudulent.

Gaetz has been clear that he believes the approximately 700 rioters arrested, jailed or awaiting trial one year after the incident have seen their civil rights violated, even referring to Democrats as “the real insurrectionists” on his Firebrand podcast, claiming they are “perverting the Constitution and Congress” for political purposes.

Taylor Greene theorized on Bannon’s podcast that the House committee investigating the riot will eventually try to “disqualify” people like her from serving in Congress.

“This is what they do. They’re good at regime change, and how do you do it? You lay it out in a perfectly executed plan, and that’s what they did. They’re professionals,” she said.