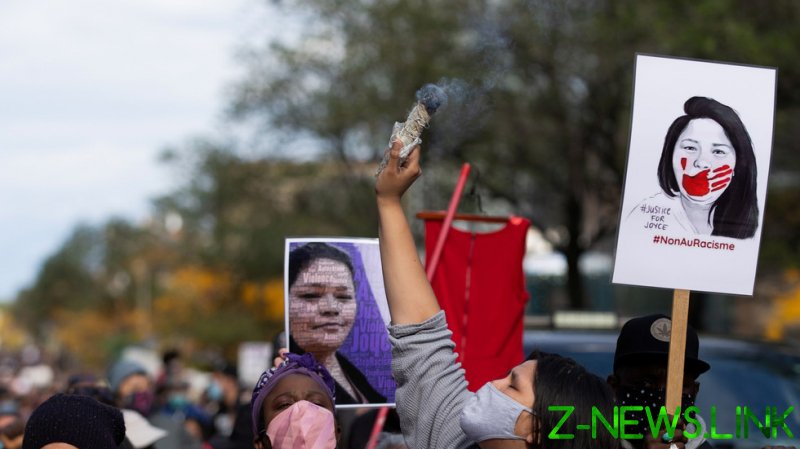 Canada’s Indigenous people are “always treated differently, and it doesn’t depend on whether it’s a public service or a shop or anything else,” Reginald Echaquan told RT days after his cousin Joyce died in Joliette, about 70km north of Montreal.

Echaquan, a 37-year-old mother of seven, suddenly felt unwell and was admitted to a Joliette hospital with stomach pain in late-September. The drama unfolded last Monday, when the woman went live on Facebook, posting an extremely disturbing video that showed her screaming in clear distress and moaning in pain.

Meanwhile, medical staff could be heard calling her “stupid as hell” in French and suggesting she had made “bad choices.” It is reported she was also asked what her children would think if they saw her “like this.”

Echaquan – who had a record of heart issues – reportedly died shortly after the live stream ended. The true cause of her death is yet to be revealed, but in her previous videos, she told followers that the staff administered her too much morphine even after her complaints.

Echaquan’s death caused a wave of outrage, especially among the local Indigenous community. On Saturday, thousands of protesters gathered in Montreal, marching through the city and chanting “Justice For Joyce,” and “No Justice, No Peace” – a nod to the Black Lives Matter movement initiated in neighboring United States.

Demonstrators decried stigma against native Canadians, and Echaquan’s relatives shared that sentiment. The woman’s husband, Carol Dube, said his loved one had died because racism and discrimination against Indigenous people are widespread in Quebec, including in the healthcare system.

“The problem is that we have systemic racism in all these spheres,” Echaquan’s cousin, Reginald, acknowledged to RT. “I can say that Joyce’s case is, unfortunately, not unique,” he said, adding, “we want to be treated differently.”

The Indigenous community are actually on their own in Canada, but fighting for their rights is an uphill battle, the man has lamented.

Nobody defends us. And when we try to defend ourselves, we are often taken for terrorists, or criminals. When your community is so small, it’s very difficult to protest.

The mourning relative accused the Quebec government of overlooking the problem of systemic racism. “There should be a political willingness to change the mentality of people,” he urged.

Quebec authorities have launched a public inquiry into Echaquan’s tragic death. Meanwhile, one nurse and one patient attendant at the Joliette hospital have already been fired.

Prime Minister Justin Trudeau called Echaquan’s treatment “the worst form of racism” and another example of “systemic” racial discrimination. Quebec Premier Francois Legault said the way the staff handled her was “unacceptable.” Critics have maintained that he was refusing to recognize the systemic character of the problem in the province. Now, Legault admitted that racism should be fought “wherever it is found” and that the government has the duty to ensure that.

The family lawyer told local media they have been preparing a lawsuit against the hospital as well as seeking criminal charges against those involved in the woman’s death.